Dating should be fun, even if a little exhausting at times. Dating over the age of 50 isn't always pretty. You know yourself better than you did at 30, but you have less patience for the endless BS -- and it is endless -- and it's difficult to find someone with whom you want to spend however much time you have left.

That's too bad, because the online dating experience has opened up possibilities to meet people you never would have met before, and if some of those people are creepy or boring or not what they seem to be, here's a news flash: That was true back in the days when you only met people at work, at school, at the gym, at bars, or the dread introduced to you by friends. Online dating isn't something to fear even if you haven't dated for years

The following is stated neither with gushing pride nor cowering shame: During those past 13 years, I've had more than 1,000 dates with more than 300 different women. And that doesn't count the five "meaningful relationships" I had along the way.

While most of my MBA classmates developed expertise in one field or another that earned them millions, my expertise has been... dating.

I like dating. I like reading online profiles. I love meeting new people. I love hearing stories and everyone -- especially women over 50 -- has a story.

My dating life has been about 95% positive. Really. I almost always enjoy the date, whether it leads to a second one, a 10th one, a relationship, or whether we say goodbye after two hours together.

Along the way on this path that most people might consider a waste of time and money, some lessons have emerged. There are things men and women can take going into this dating abyss, but let's start with advice for you (older) guys, in reverse order of importance

•Funny is good. Optimistic is even better. Cynical and bitter might work if you're a dark and complicated graduate student. Otherwise, always be upbeat (certainly on a first or second date).

•Work to stay in good shape. In a nation of overweight people, keeping fit will set you apart from the crowd, and also say some good things about you without uttering a word.

•Be energetic and adventurous, in the bedroom and out.

•Be doggedly attentive and affectionate -- do things for women, from grocery shopping to rubbing their tired feet to being a sociable party companion and more.

•But by far the most important advice I can give is LISTEN! 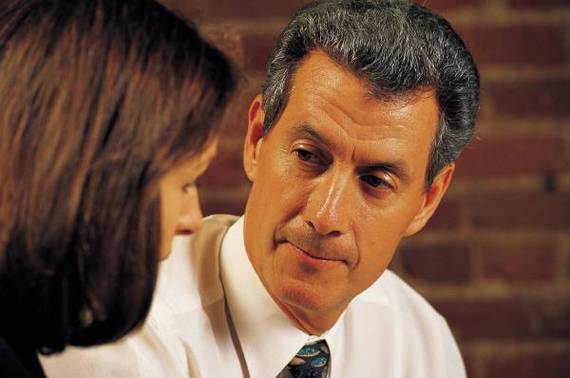 Listening is the key to dating success. Yes, money is important (I don't have much, so I can only assume from what I've heard), and being attractive is great (I'm not Clooney but I try my best.)

But listening trumps them all. I mean really listening. Being genuinely interested in hearing about their histories, their successes, their disappointments, their journeys yet to take. I am always stunned by how most people just don't listen, and how far one can get simply by listening.

Most women over 50 have been in relationships with men who don't care much about what they have to say. For 10, 20, 30 years, the men in their lives have been blathering on about themselves and not listening.

I ENJOY listening. Maybe it's the journalist in me who always preferred interviewing to being interviewed. I pay attention. I ask questions that make it clear I have heard what they say and want to hear more. I track the conversation -- I'm not leaping from one topic to another.

But even if you don't like listening, LISTEN anyway. There's a few key reasons to do this.

•First, you're not as fascinating as you think you are. Not by a long shot. I don't care if you're Jon Hamm or Joe Scarborough or the head of an investment bank or ambassador to Ghana. You're simply not that interesting. Talking on and on about yourself is annoying. Trust me on this. I've done lots of cool things, worked for Tom Hanks and for governors and CEOs and climbed mountains and such. But I'm not that interesting.

•Third, she probably is pretty interesting. But even if not, she has something to say and longs to be heard.

•And fourth, listening is an amazingly under-appreciated talent. You will be rewarded for doing it. Hearing someone's story and details about their life is what it's all about, as far as I'm concerned. I always come away the better for listening. Always.

Next time, we'll talk about sex and money, and start talking about some advice for women over 50 in the dating world.