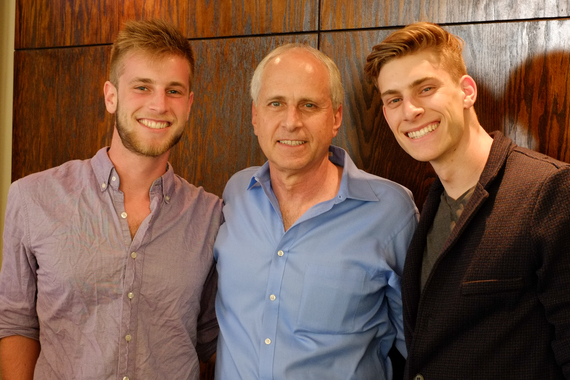 This past August, I posted a piece entitled "25 Differences Between Dating as a Teenager vs. Dating Over 50." It explored what men said, thought, and worried about way back in their teens compared to now in middle age.

In discussion with my mid-20s son Daniel, we came up with a twist on that premise: When it comes to dating and romance now, what differences would a single Dad in his 50s encounter compared to his single son in his 20s? In other words, how might it go when a dad and his son sit down to openly compare notes about what's happening with the women in their lives?

Son: She loves when I Snapchat her shots of my six-pack.
Dad: She begged me not to take off my shirt at the pool.

Dad: She's got this big, comfy bed, so I always sleep well.
Son: She's just got a futon, so after we do it I've got an excuse to go home.

Son: She really loves my distressed, acid-washed jeans.
Dad: She "suggested" I change when I got a drop of soup on my cuff.

Dad: We have a rule, and never do it when her kids sleep over.
Son: She's got three roommates, but that hasn't deterred us yet.

Dad: It's cute, she's taking golf lessons so we can play together.
Son: It sucks, she keeps asking to play FIFA with me and my friends.

Son: She really loves my new sleeve tattoo.
Dad: She said she'd pay to laser off my "Keep On Truckin'" tat.

And of course, there are some areas that are so clear, so obvious, so universal, that both the dad and the son would say exactly same thing:

For more content of interest to anyone who is Divorced Over 50, or whose marriage is at a point where divorce is a possibility, please visit DivorcedOver50.com.

Top 10 Signs Of A Midlife Crisis