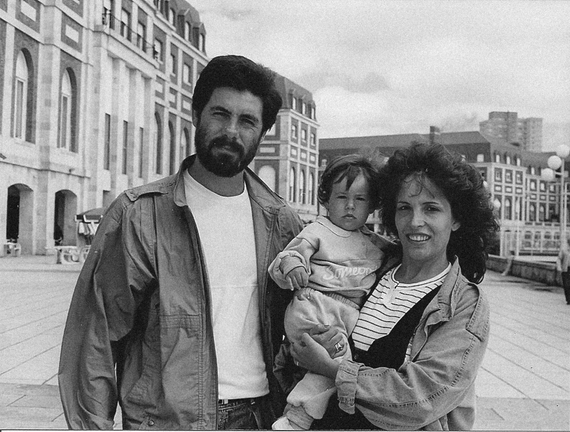 Family photo of me with my mother and father in Argentina.

Let's talk about the fear of disappointing parents.

This fear prevents a "good girl" from fully stepping into her power as a woman, as this power may look unusual to her parent's culture, religion, and generation. I've noticed this phenomenon to be especially true if her parents come from a different country than the one she grew up in or resides.

Sacrifice is a central piece of the immigrant story. As a daughter of immigrants, I often felt humbled by my parents who left so much behind in their home country, Argentina, to provide a better life for my brother and I.

For the longest time, I felt I had to repay my parents for the sacrifices they made. I owed it to them to become a good, successful woman. Because if I didn't, their sacrifice would feel wasted. And as I meandered through my career options, I felt terribly guilty. Was I failing them? They had given up so much, and yet I couldn't figure out a way to become financially stable.

One day, I was speaking with my aunt in Argentina, sharing the burden I was feeling. And she shifted my entire perspective with just one sentence:

"Your parents didn't just leave their home for you. They left for themselves too."

I felt a weight lift off my chest. I remember this sentence so clearly because since the moment it was uttered, I have felt little to no pressure to "pay my parents back," by sacrificing my own happiness.

I've noticed throughout the years, and while coaching fellow daughters of immigrants, that the immigrant story has shaped how we search and find our meaningful work.

If you are a daughter of immigrants, below are some tendencies that are worth examining. When we understand the root of the tendency, it can begin to loosen its grip and power on our decision making.

Many immigrant parents feel they have risked so much so that their children don't have to risk anything. The belief is that their children have "been set up" to experience a secure and stable career path. The only problem is that often the most meaningful career paths are not stable and require a degree of risk and sacrifice. We don't want to choose these pathways to torture our parents, but like them, we see it as a way to expand into opportunities and support the next generation in having more freedom. Beware of any internalized beliefs such as, "They've set me up to have a stable and secure life, so I owe it to them to stay stable and secure."

For my parents, education was the ticket out of poverty and into upper-middle class. As a result, they valued schooling and higher degrees more than professional work, entrepreneurship, and definitely the arts. Education was how one "leveled" up. I distinctly remember my parents feeling surprised when I didn't go straight into a PhD program after college. My father warned me, "Be careful, once you start making money, you might never go back to school." He said this because he had probably observed this phenomenon among his own peers in Argentina.

Along with the reasons above, immigrant parents prefer "high status" chartered career paths, such as medicine, engineering, and law, than non-chartered ones. Part of the reason for this, is that chartered paths have a long established history and perhaps allowed many parents to elevate themselves out of the circumstances of their countries. On the flip side, they may feel that such professions are the "gold standard" they were never able to experience themselves, especially if they were small business owners or white collar. Specialization was another way to become secure. In Mexico, I met a chef who talked about the specialization of craft in Italy: there's an expert chocolatier, an expert breadmaker, winemaker, shoemaker etc. Specialization ensures we are always needed and thus secure and safe.

For many immigrants, life is about hard work and putting food on the table. As such, both my parents had very focused and linear paths from school to work. The idea of "taking a break" and exploring for a few years was simply a foreign concept. My parents, however, had to accept my several sabbaticals. (To their credit, they were some of the more progressive of their culture and generation, and generally awesome). And it became clear to me as I contemplated following a non-linear career path that I had internalized a pressure to achieve "greatness" because my parents had achieved so much and against the odds.

5. You feel pressured "to amount to something"

This is obviously similar to the tendency above, but I wanted to parse it out because it's a layer deeper. Many of our parents grew up in tight-knit cultures and communities that really care about what such-and-such did and who such-and-such married. Some of our immigrant parents have grown to really care about other people's opinions. We risk becoming "their embarrassment" if we don't marry before we're 30 or earn that Ph.D. There is a constant pressure to "amount" in our work and relationships. "Amount" to expectations, often internalized from their culture and religion. If our parents view us as ways to signal their own accomplishments, we begin to destabilize our sense of innate worthiness. We become worthy only when we contribute and "amount" to expectations. And this is a dangerous notion indeed. That's why a sense of self-love is so important. I'd like to think that most parents love their children unconditionally, but the outward appearance of conditions on love can have detrimental effects on a woman's personal and professional development.