Daughters of the Red Light is my new e-single about the poverty, injustice and stigma that keep women and girls from escaping India's notorious sex industry. Read an excerpt below.

"When you come as a volunteer, you'll have to dress ... differently," said my new supervisor, disdainfully running her eyes over my black capris and short-sleeve scoop-neck purple T-shirt.

"Yes, of course," I stammered in embarrassment. "I don't expect to ... I'll wear Indian clothes when I visit the brothels." I cursed myself for not choosing a more appropriate outfit to meet the head of an anti-trafficking nonprofit that helps sex workers and their children in Mumbai.

I went straight home and rifled through the bottom shelves of my closet, looking for my loosest, most modest salwaar khameezes. I found a full-sleeve pink-and-green one that looked about right. And then a synthetic black one that would dry quickly if it got wet in the monsoon. Or the flowing blue khameez with a geometric pattern of overlapping diamonds that belonged to my grandmother. I hoped they'd keep me unnoticed.

When I ventured into the brothels of Falkland Road a few days later, everyone turned to stare.

The lungi-clad men in the dank hallways I'd anticipated. But I was unnerved when the women swiveled their heads to gawk at me. A client asked a pimp how much I cost, erupting in laughter. I pretended I didn't understand.

When I told my friends I would be volunteering in Kamathipura, the city's largest red-light district, the first question they asked was, "Is that safe?" At the time, the question seemed prejudiced. At 20, I thought I was too worldly for such small-minded fears.

But the only place I ever felt comfortable over my three months there was at the daily after-school program where I taught English to first-graders whose moms were sex workers. The goal was to help them stay in school, where they would be less likely to become ensnared in the sex trade.

Over time, I got to know something about the children's lives. There was one girl, Shabnam, who always finished her work last, but the drawings on the backs of her worksheets were the most intricate. Before she colored, she studied all the crayons in the box, carefully selecting the ones she needed, lining them up in a neat row in front of her.

Shabnam wore her hair in two thick braids, tied at the ends with red ribbons. When she grinned -- her response to frequent mistakes in math homework -- she revealed a large gap between her two front teeth. Her mother worked at a brothel on Falkland Road, and at least once a week Shabnam missed school because her mother didn't wake up to walk her to the bus stop.

One day in July of 2009, Shabnam came to class in a sleeveless orange T-shirt and gray shorts. A few minutes before class ended, sheets of rain suddenly drenched the world outside the windows. The other students began pulling crumpled plastic raincoats out of their bags or waiting for their mothers to arrive with umbrellas. I was collecting my things when Shabnam, without a raincoat or umbrella, asked, "Didi, mein ghar kaise jaon? Aap mujhe chhod dogi?" Big Sister, how will I go home? Will you drop me?

We crouched under my umbrella as I walked her home. The drains in Kamathipura are perpetually clogged. The street had started to flood. We cut through the downpour to Falkland Road. Empty plastic bags, coconuts, stray slippers, and muck rose up with the water. Despite the pelting rain, the women were standing in the doorways of the brothels, waiting for customers who might be undeterred. Their faces were carefully made up with lipstick, eyeliner, and a mask of powder iridescent under the streetlights' glow.

Shabnam trotted along confidently, until she suddenly darted out from under the umbrella and hopped over a puddle. "Bye, Didi," she called, waving over her shoulder as she disappeared up a dark wooden staircase at a brothel called Café House. I still have a vague recollection of where it is, though in the dark, all the alleyways look the same.

For a few moments, I stood there, transfixed. I gazed up the stairs into the abyss and imagined the men jeering inside with red, unfocused eyes, the businesslike madams counting cash, and the sex workers putting on a grand show with pouty lips and hips suggestively cocked to one side. A seven-year-old girl, who often deliberately forgets her math textbook at school but loves to draw, goes home every evening to this, a place where abuse of women is routine, I thought.

I was overcome by a sudden impulse to run up the spit-stained stairs and rescue Shabnam from the room on the second floor. But I turned around instead. In the taxi to the station, boarding the train and riding home in the pouring rain, I repeated, "No one will ever forgive me," over and over.

Shanoor Seervai is an Indian writer and journalist. Read her new e-single "Daughters of the Red Light" here. 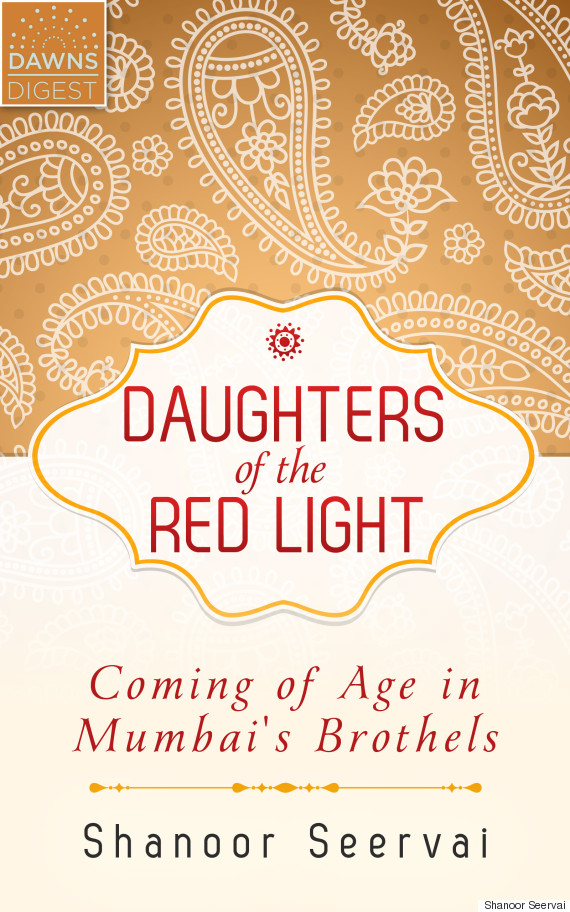