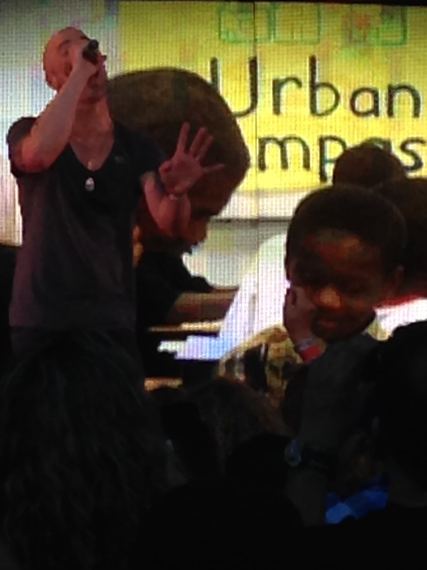 In 1986, Chris Daughtry was seven-years-old when John Rzeznik and Robby Takac were releasing their first album as the Goo Goo Dolls; yet here he and his band were, co-headlining with the Goo Goo Dolls on a warm summer's night at Los Angeles' Griffith Park's outdoor venue, Nederlander's Greek Theatre. Adding to the multi-generational mix was the multi-platinum The Plain White T's getting the evening started. They formed in 1997, two years after the Goo Goo Dolls hit with "Name" and everything changed for them.

The crowd was equally multi-generational, from late Boomers (those in their early 50s) to Hipsters in their 20s and 30s and even teens. The generational diversity of the bill made for an equally diverse crowd. But the music pulled it all together, and the evening delivered in spades.

I would love to give The Plain White T's the review they deserve, but traffic from Long Beach, CA to the Greek was such that we arrived at 1915 (7:15 p.m.) . Daughtry had just taken the stage. The band was well in to their hit "It's Not Over" by the time we took our seats among the summer crowd of concertgoers. The pit was full of screaming fans, and sitting next to that energy made it easy to get lost in the show.

The band, and Chris Daughtry himself, put on a rousing Pop/Rock performance. For those that came expecting the American Idol Daughtry forget about it; he has honed himself in to a full fledged Rock star, complete with a band of excellent musicians and rock solid songs that showcase his raw, often gritty vocals. It sounds like singing hurts him at times, and even he joked about it.

"I always think I'm going to give myself an aneurysm when I sing that song," Daughtry laughed as he took a moment after belting out the song "Traitor" from the band's latest album Baptized. But with all the passion and power he packs in to each song, he may not be far off. He's in excellent physical shape these days, having toned up publicly, posting photos of his ripped stomach to social media earlier in the year. His wife sat onstage, watching on; like she has all along. He sang the new song "Wild Heart" to her, having written it for her. "She kicks ass," he told us before the number.

The set was a mix of old and new, multi-media giant monitors with videos and other animations setting and changing the mood for each new song. The comic book look of the backgrounds enhanced Waiting for Superman and as night fell on Griffith Park the full effect of the light show took affect and it was easy to see that Daughtry is a full-fledged stadium band destined to be around as long as the act following them.

During the break I ran in to Barbara Cane, VP & GM, BMI, West Coast and she was beaming. Daughtry is a BMI writer (as is half of the Goo Goo Dolls) and a talent she has championed from the beginning (like so many others). Daughtry has performed well with a string of hits and a new one brewing with "Battleships" and its infectious "boom ba boom boom ba boom boom boom hook," so there's a lot to be happy about this night.

The acts at the Greek have to be done early because of the neighbors. When your house costs three-to-six million anything, you can make some rules. Daughtry finished their set at 2020 (8:20 p.m.) with the Goo Goo Dolls coming on shortly before 2100 (9 p.m.). Their set would last until 2230 (10:30 p.m.) and be the finely polished, big-stadium show one would expect from a band that's been together for the most part since 1985.

I've never seen them, and don't own one of their records. Well, I do now after downloading greatest hits from the iTunes store on the way home. So, I did some history on the band before going. It helped.

In the early days Robby Takac sang leads and it wasn't for several album that John Rzeznik became more of the lead vocalist. Takac's numbers have a different sound and feel, more Punk and Rock edged than the Pop hits Rzeznik's voice is so known.

As they were about to sing "Name" Rzeznik reflected, "I still had a shitty day job, and then heard the song on the radio. I knew then two things, first, everyone that thought the band was cool because it was indy and underground and all that, suddenly wouldn't; and two, well, Fuck 'em," he laughed. 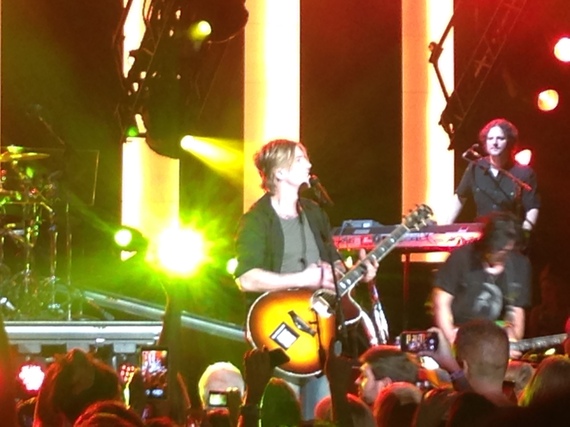 Rzeznik is 49, Takac will be 50 this September but one would never know. All the energy, all the verve, pomp and posturing one would expect at a major Rock show was here. Interactive light shows and multimedia backgrounds, rising staging, crazy guitar solos, lots of hair tossing, tattoos, so many guitar changes I lost count, no, The Goo Goo Dolls are at the top of their game and they didn't disappoint the crowd that was on their feet all night singing. And given the Rolling Stones are touring and Jagger is 70, the band has a long time left on the boards.

And that was one of the coolest parts of the evening. With all that is going on in the world, outside the Greek amphitheater setting, all the worries going on, for a few hours, people were standing, singing, hugging, laughing, singing louder... people of all ages, from all income levels. Everyone was having a good time, seeing a favorite band; whether they came for the Plain White T's, Daughtry or the Goo Goo Dolls anyone that's listened to Top 40 Rock from present to the last 20 years or so wasn't disappointed. The bill delivered.

The tour continues throughout the summer, for a list of cities go here. Greek Theatre LA concerts also continue through the summer.