David Goldberg, the CEO of Survey Monkey and the husband of Facebook COO Sheryl Sandberg, has died. He was 47.

It’s with incredible shock and sadness that I’m letting our friends and family know that my amazing brother, Dave...

Posted by Robert Goldberg on Saturday, May 2, 2015

Facebook founder Mark Zuckerberg shared the post, adding, “Dave Goldberg was an amazing person and I am glad I got to know him. My thoughts and prayers are with Sheryl and her family.”

Twitter CEO Dick Costolo called the news “heartbreaking” in a tweet, and described Goldberg as “one of the truly great people on the planet … of almost unimaginably remarkable character.” 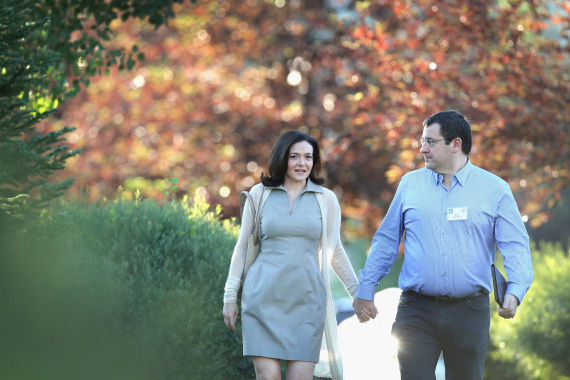 “Dave’s genius, courage and leadership were overshadowed only by his compassion, friendship and heart,” Survey Monkey said in a statement following the news. “His greatest love was for his family. Our sympathy goes out to them and to all who were touched by this extraordinary man. We are all heartbroken.”

Arianna Huffington also shared Robert's post on Facebook, adding, "So deeply saddened and shocked by the death of Dave Goldberg. I was blessed to get to know him through his beloved wife Sheryl and to see firsthand what an amazing father, son, innovator, and caring friend he was."

Recode's Kara Swisher mourned the "incomprehensible" loss with a remark on "His unfailing kindness toward everyone, endless generosity with his time, insights and advice and basic great-guy personality made Dave — no one called him David, really — the heart and also soul of the tech and media community."

Love your family + your friends. Be thoughtful. Work hard. Strive to improve. Help others. Dave Goldberg aced all of these. Love ya Goldie.

My friend @davegoldberg kindest, most generous, loving father, loyal husband, great ceo, & sweetest friend. May his memory be a blessing.

Devastated to hear about loss of @davegoldberg. One of kindest & most generous friends I've known. My heart goes out to Sheryl & his family

RIP @davegoldberg. I have never known a more kind individual. You will be missed.

One of the things I admired most about @davegoldberg was his ability to balance being a husband and father with his work.

I never heard anyone say a disparaging word about @davegoldberg. Ever. Almost unheard of when it comes to successful people in S. Valley

Goldberg rose to prominence in the tech industry in the 1990s, founding a company by the name of Launch Media in 1994, which he sold to Yahoo in 2001. He stayed on at Yahoo for six years, and then joined Benchmark Capital, where he served as an entrepreneur in residence.

“We went out to dinner and a movie and hit it off. She fell asleep on my shoulder, which I thought was great," Goldberg recalled in an interview with the Los Angeles Times in 2013. "Turns out, I learned much later, she sleeps through every movie, on any shoulder that is available, but it worked on me at that moment of time."

In 2009, he headed to Survey Monkey and built it into a billion-dollar company, growing the staff from 14 to what is now 500, reports Business Insider. He had just celebrated his sixth anniversary at the company, calling it “one of [his] best decisions.”