When the band took home the award for Best Rock Video at the VMAs late last year, Grohl made a statement that, when paired with his one Sunday night, gets at a similar sentiment:

His words come as no surprise, considering rock's obituary has been written and re-written in the past few years. In Britain, where much of American rock has taken its cue from, pop albums outsold rock albums for the first time in seven years in 2011. And while the Grammys are hardly the best barometer of the health of any kind music, the artists nominated alongside the Foo Fighters in the Best Rock Song category -- Mumford & Sons, The Decemberists, Coldplay and Radiohead -- are telling of the direction the genre is taking.

An article in the Guardian last month, however, titled "Rock music's death knell has yet to toll," should offer Grohl some comfort.

"The obvious signs like the top 40 don't really tell the story about the underlying interest in guitar-driven music," George Ergatoudis, the head of music at BBC's Radio 1 and 1Xtra, told the Guardian. "This year we will start to see the pendulum swing back a little."

What we're missing, Ergatoudis argues, is a flagship band to rally around, a Strokes or Oasis that will begin the cycle again. Ergatoudis does, however, point to dance acts such as Nero, Chase & Status, Skrillex and Pendulum who have blended rock with electronica, noting that it may come down to how we decide to define rock, which, until recently, has stayed tied to the guitar. Sunday night, this trend toward electronic dance music, which has already been injected into pop music, was on full display, most forebodingly when house producer deadmau5 loomed above the stage in his signature, glowing mouse ears, looking like our new overlord. 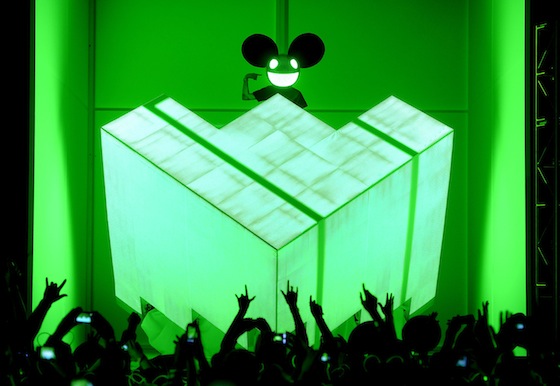 Perhaps this is just an awkward stage for rock. After all, it's weathered these death knells before due to incoming acts (looking at you, 60s girl groups). In the meantime, Grohl doesn't seem to bear any ill-will for the new kids in town -- despite his comments, he performed alongside deadmau5 Sunday and could later be spotted in the crowd, head-banging to house music.