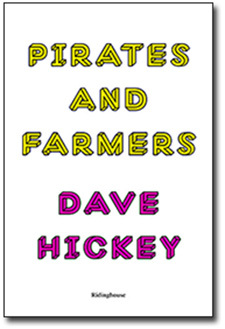 Pretty much any epithet used to describe the art critic and MacArthur Award laureate Dave Hickey is doomed to fail. His last four decades as an art critic earned him the title "the enfant terrible of art criticism," for speaking his mind about low-grade, overhyped and overpriced art, "provocative," for pointing out the absurdities of the art world's infrastructure, and "elitist" for championing the idea of difficult and specific above global and banal. Even the polite and placating "unconventional" label hides the conformist animosity just long enough to let everyone formulate their own admiring or indignant reading of Hickey. Labels do not stick to him because, as we have long known, he is not in anyone's camp. He is on the side of art, and, as we just learned, Dave Hickey is a pirate.

His most recent book of essays, Pirates and Farmers, just out from Ridinghouse, contains in its title the one and only accurate label that can apply to Hickey: pirate. Pirates, as he tells us, are different from farmers. Farmers are the vast majority of passengers riding high and low on today's lone and bloated cultural flagship. Pirates question and transgress, farmers maintain the status quo as they complete and process the art grant applications -- a perfect relationship given that one lot despises the other. While today's "art world professionals" (farmers) are busy plotting their transition upwards, towards big blue chip farming corporations, or downwards, towards small, sustainable, social farming practices, Hickey's insights continue to cause discomfort.

Hickey, born in 1940 in Fort Worth, Texas, is now alone on the high seas and this Jolly Roger is going full speed ahead. "Piracy is a genetic proclivity," and this is why pirates cannot retire -- he says in the book. Hickey certainly did not retire as he had recently announced, although his current drydocking in the remote Southwest is an unfortunate and sad reality. In Las Vegas, where he taught for many years, the farmers made him walk the plank, in Santa Fe, the farmers' dust coats his sails. This art world fact should not be just another high seas injustice: we, farmers, should be reminded of it everyday by a bumper sticker affixed to our eco-friendly tractors. 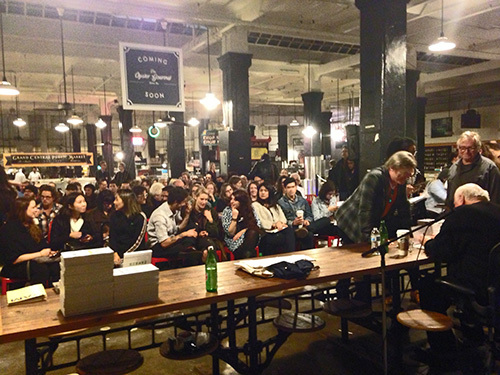 Last Wednesday, as part of his West Coast book tour, Hickey gave a talk at a MoCA sponsored special pop-up event at Grand Central Market to an audience of about two hundred farmers, two thirds of them under the age of 30. Another promotional event, held three days later in a full theater at the Barker Hangar, during ALAC art fair, was formatted as a conversation with LA Times art critic David Pagel.

The real life audience's reaction to both events was typical for Hickey's performances: Extra long and strong applause signaled cathartic relief. On the other hand, the furtive virtual audience which, for whatever reason chose not to attend in person, quickly filed their rage by way of the second and third hand digital reports. Clearly, Hickey, the pirate, still has his legendary power to irk commercial farmers with his iconoclastic and anti-canonical remarks, and this swarm of farmers was not going to be happy until the pirate was tossed overboard in a potato sack. 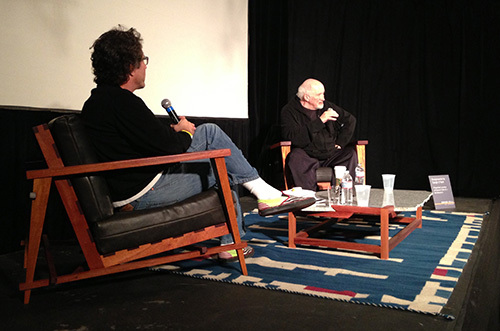 Hickey's performance, therefore, was a great success as it was meant to provoke and to shock the farmers and farmer associations (a tall, slender and white venti dark roast was fueling the buccaneer). In these rough waters, Hickey valiantly walked unsecured across his legendary critical rigging, pitchforks poised beneath him. There were "lyrical waves, stumbles, mumbles, laughter, lyrical waves, stumbles, mumbles, lyrical waves, laughter, fantastic climaxes, stumbles, and dives back into the art world abyss." In short, his performances were everything an audience would require of a big-name, high-stakes, veteran risk-taker.

Anyone with minimal knowledge of Hickey's work can tell you that it is absurd to expect from him impartial, inclusive, and identity sensitive sketches of the art world. As he sees it, the art world is collapsing around us under the weight of bad financial investments, compromised art education, and disingenuous art criticism (there are chapters covering all three topics in his new book). Rather, Hickey's performances are public demonstrations of pirate resilience and farmer predictability. Despite all the whacks from every direction, year after year, Dave Hickey's head still remains firmly on his shoulders. Remarkably, he is as vital and unpredictable as ever. And the irony of predictability and knee-jerkey reactions is that it plays on cue into Hickey's model of the pirate and farmer universe.

If only the farmers, incensed about his jokes and anecdotes pulled out of context, or the dues he did not pay, could just take the time to read this book or his other books... but then again, there are too many more pressing things to do. The farm, after all, requires constant tending. Someone has to spread fresh manure for the next crop, which will either be harvested or plowed back under. 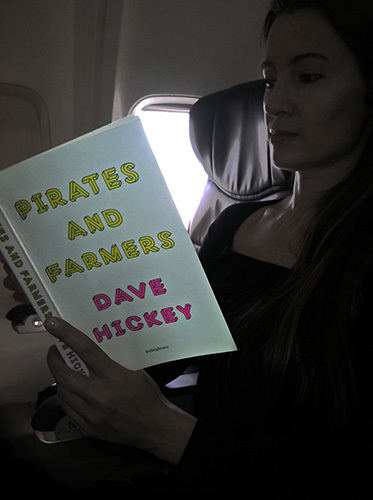