With the attention focused on the Presidential election, it is easy to forget that there are committed professionals working in public service in our nation's capital. David Hoppe, Chief of Staff to the Republican Speaker of the House Paul Ryan, is one of the heroes. You won't often see Hoppe in the spotlight because keeps a low profile, but he has had a career that has impacted the lives of millions of people with disabilities. 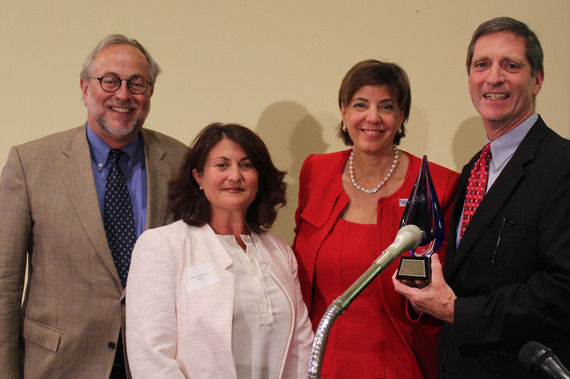 RespectAbility board members Doc Sweitzer, Donna Meltzer, Jennifer Laszlo Mizrahi with Dave Hoppe when he received his award from RespectAbility. It was broadcast on CSPAN.

Beyond his work as a giant in the world of public policy, David Hoppe and his wife are also the proud and successful parents of a now grown son with Down syndrome. Hoppe's experiences and compassion have inspired him to work hard on policies that help thousands of students with disabilities every year.

As someone with a disability myself, and the proud parent who knows what it means to raise a child with multiple disabilities, I owe Dave Hoppe a lot. Because of his work, children with disabilities around the country are able to be successfully integrated into mainstream classrooms and to have the high expectations they need to succeed in life.

Having dealt with legislative development and strategy at the highest levels on Capitol Hill, Hoppe is an expert in working with political personalities on both sides of the aisle as well as the White House to pass many important bills. He has worked on an incredible range of issues including welfare reform, tax policies and education reform. The laws that he helped to develop are almost too numerous to mention. However, his work on the Individuals with Disabilities Education Act and the IDEA amendments of 1997 were utterly transformative. And in a time of great gridlock and partisanship.

With David Hoppe's help, advocates for people with disabilities were able to find common ground and strengthen the laws that govern special education. Many of us who have disabilities, or our children and families, are the beneficiaries of this work. He built consensus and worked hard because he personally understood the importance of improving educational opportunities for young people with disabilities. The full story is told in the USA Today article entitled How One Boy Moved Congress.

Today, because of this law, children with disabilities have the legal right to a free and appropriate public education. Inclusion, early intervention and high expectations are now a reality for many and to a large extent this is because of David's work. In 2003, David left the Hill to work for public affairs firm called Quinn Gillespie and Associates, serving as President of QGA from 2007-2011. However, Hoppe has never left the critical work of being an ally and champion of the disability community. Recently Hoppe served as a senior advisor to the Bi-Partisan Policy Center and worked on crucial policy issues affecting SSDI and Social Security .

Hoppe also served as vice chairman of the board of Easter Seals of the District of Columbia, Maryland and northern Virginia. He was chairman of the government affairs committee for the National Down Syndrome Society and served on the board of the Coalition to Promote Self-Determination, a group of organizations working to empower individuals with disabilities to achieve greater independence. He did all of this while also working full time and being an active parent.

Recently, David Hoppe played a major role in the creation of the new Achieving a Better Life Experience (ABLE) Ac which for the first time enables parents of children with disabilities to help prepare their children financially for the future. This legislation as we all know is a game changer and we thank you so much for all of your efforts to make ABLE a reality. David Hoppe's life and leadership is a testament to how love and personal experience can shape the political process. His humility and efforts are numerous and his leadership is very clear.

He tells the story in a way that should inspire us all : "If you look at what has happened in the last two generations, the world has changed. It has to change a lot more but the world has changed for people with disabilities. Early intervention. Education. IDEA which passed in 1975. Then you had ADA and then the mountain to climb was education. IDEA changed that, it changed slowly at first, laboriously, and over time we were able to make other changes and to improve the law for people with disabilities. But it was that second mountain that we had to change legally to provide the opportunities. ADA came along shortly after that broadly making changes and forcing an inclusion of people with disabilities in a way that our society had never done that before. We now are looking at the third mountain. We now have kids who through early intervention and schooling have been brought up with their peers. Is it little wonder they parent to stay with their peers? We're seeing more and more programs throughout the country of postsecondary education for people with disabilities. The next big hurdle is independent living and jobs and housing and transportation, all the things people with disabilities need to be a part of everyday society the way they ought to be. These are things that are going to take some time but we should never let that slow us down. We know we're going to have to work hard. We know we have to push we know we're going to have to move things around. As we start doing this what you find is that this is a wave, and this wave builds." Said Hoppe.

At this point we do not know who the next President of the United States will be. The voters will make that decision in November. But whomever they choose, the next President will find that Dave Hoppe is a true devoted talent in creating successful public policies. America is lucky that he is chief of staff to Speaker Ryan.