This week, Animal Planet kicked off the latest offering from likable Steve Irwin-wannabe Dave Salmoni. "Into The Pride" follows Salmoni as he attempts to prove that humans can live in harmony with wild lions. To do so, Dave scoots around the Namibian bush on a quad-bike looking for a close encounter with the big cats. You might think a 4-wheeler doesn't offer much protection but, provided they're not hunted or persecuted, lions quickly get used to vehicles. A vehicle acts just like a mobile hide which is why millions of people a year are able to enjoy extraordinary experiences watching wild lions from the safety of their safari jeeps and mini-vans in Africa's great game parks. It even works with ATVs which disrupt the human silhouette sufficiently that Salmoni is on fairly safe ground -- so long as he keeps his distance and stays on the bike. The problem is, that's not daring enough for Dangerous Dave. When he finds the lions, he dismounts and, armed only with his shepherd's cane, he walks up to them.

Understandably and predictably, the lions get pissed off. In one sequence from the series, Salmoni pulls this stunt with a lioness called Cleo, resting with the pride's cubs and a gemsbok kill. Now, if someone asked me, how would I go out of my way to really aggravate a lioness, I'd tell them "threaten her when she is protecting her cubs. Or a carcass. Or, if you were an utterly self-absorbed ignoramus, both." Cleo does what a million years of evolution have engineered her to do when faced with potential danger to her cubs -- she charges. Dave shrieks a bit, high-tails it back to the ATV and scolds Cleo for her "inappropriate behavior." Of course, it's actually wholly appropriate -- any wild lioness so gratuitously provoked is apt to do the same. Once he's back on the bike, Cleo relaxes a little and backs off. Predictably, that only encourages this bushveld buffoon to try his luck again, and, again, Cleo comes like a tawny missile. She is upset, frightened and angry -- all thanks to Salmoni who is determined to show us that, as he recently told People magazine, he was 'tougher than they were'.

What self-indulgent baloney. Salmoni repeatedly tells us his antics are necessary because these are aggressive problem lions that must be habituated for eco-tourism or they will be destroyed. That would be reasonable if he stayed with his vehicle, just as tourists, researchers, scientists, guides and park rangers do every day across Africa. None of these folks wander up to lions hoping to get cozy (well, occasionally they do but the ending usually isn't pretty). If Salmoni was honest and respectful about habituating lions for tourists, he'd get them used to vehicles -- it's safer for both human and lion, and it wouldn't provoke the same distressed fury from Cleo. Ironically, most of the first episode is taken up with encounter after encounter between Dave and his film crew watching lions from their Land Rovers. The tactic yields beautiful vision of lions being lions -- Salmoni's team cops a few baleful looks and one frustrated rev from Cleo when Dave drives too close, but nothing serious. But of course that doesn't make good enough television so Salmoni makes sure he says 'these lions hate vehicles' a lot even after we've just watched shots of the cats doing little more than keeping a reasonable distance. And let's not forget, Dave reassures us this is all in the name of "conservation" so it's fine to crank Cleo's stress off the charts.

And to what end? Even if Cleo eventually tires of charging this clown, all he's achieved is to put her life more at risk. Lions co-evolved with our kind in Africa and generally do their best to avoid us. When wild lions see a person coming, they know enough to either disappear or give fair warning. Walking in the African bush, I've been the recipient of their low warning rumble a few times, like the sound of a tractor-trailer changing down gears. Lions tell people when it's a good time to change direction because they want to avoid conflict. Episode 1 shows a textbook case from one of the males, Brutus, on Dave's inaugural walk-in (niftily re-interpreted by our hero as the first step in Brutus' 'training'. Sheesh). Salmoni repeatedly forces these conflicts onto Cleo and her family in his puerile quest to show us who's boss. If he succeeds, Cleo is actually a great deal more dangerous. Conditioned out of her natural, sensible instinct to keep people at a safe distance, her normal flight circle becomes perilously small. Someone -- perhaps a lion-loving tourist who has seen the show -- only need blunder into her and, faced with a perceived hazard at too-close-for-comfort range, she attacks. If it happens, the predictable outcome is that Cleo gets a bullet. Good work Dave.

The greatest shame of this made-for-TV nonsense is that it obscures the authentic and far more meaningful conservation efforts undertaken by thousands of passionate, anonymous professionals working in Africa today. They will never get the recognition that Salmoni craves and they certainly will never see anything like his pay check. But they are the reason that lions and the wild places they need will persist. Salmoni isn't. 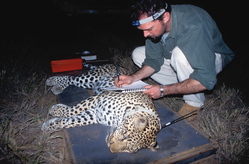 Dr. Luke Hunter is the Executive Director at Panthera, the leading global nonprofit organization devoted to saving the world's wild cat species from the diminutive black-footed cat of southern Africa to the massive tiger of Asia. Hunter has conducted fieldwork on large cats in Africa since 1992. His current projects include assessing the effects of sport hunting and illegal persecution on leopards outside protected areas, developing a conservation strategy for lions across their African range, and the first intensive study of Persian leopards and the last surviving Asiatic cheetahs in Iran.