Some 80 years ago, legendary Mexican artist David Alfaro Siqueiros unveiled his only public mural in the United States -- "Tropical America,” painted along an 80-foot wall on Olvera street in Los Angeles. The powers that be didn’t care for it. The main image of a crucified indigenous man below an eagle, representing the United States, offended local officials, who censored the mural with a layer of white painting.

Now, "Tropical America" is back.

The city of Los Angeles re-unveiled the mural on Tuesday, vindicating Chicano artists and activists who had worked for years to repair the destroyed mural.

Siqueiros spent six months in Los Angeles after the radical leftist was jailed in 1932 in Mexico. Then, like now, U.S. authorities were rounding up undocumented immigrants and deporting them to Mexico, according to NPR. He was commissioned to paint a quaint mural depicting the life in Latin America, but, as he said in a 1971 documentary by Jesus Trevino:

[F]or me … 'America Tropical' was a land of natives, of Indians, Creoles, of African-American men, all of them invariably persecuted and harassed by their respective governments.

There may be some lingering self-consciousness about the mural’s anti-imperialist message. The title is often abbreviated in news reports. The full title reads “Tropical America: Oppressed and Destroyed by Imperialsm.”

Nevertheless, the city of Los Angeles and the Getty Conservation Institute teamed up to pay the project’s $10 million bill.

As an editorial in The Los Angeles Times notes:

(O)ne delicious aspect of the mural's return is that it was sponsored in part by the city government, which recoiled at the original, and in part by the Getty Foundation, whose patron was just the sort of capitalist the artist so vehemently deplored.

Calle 13’s René “Residente” Pérez and former Rage Against the Machine frontman Zack de la Rocha were among the hundreds of spectators who attended the Siqueiros mural opening, according to Remezcla. 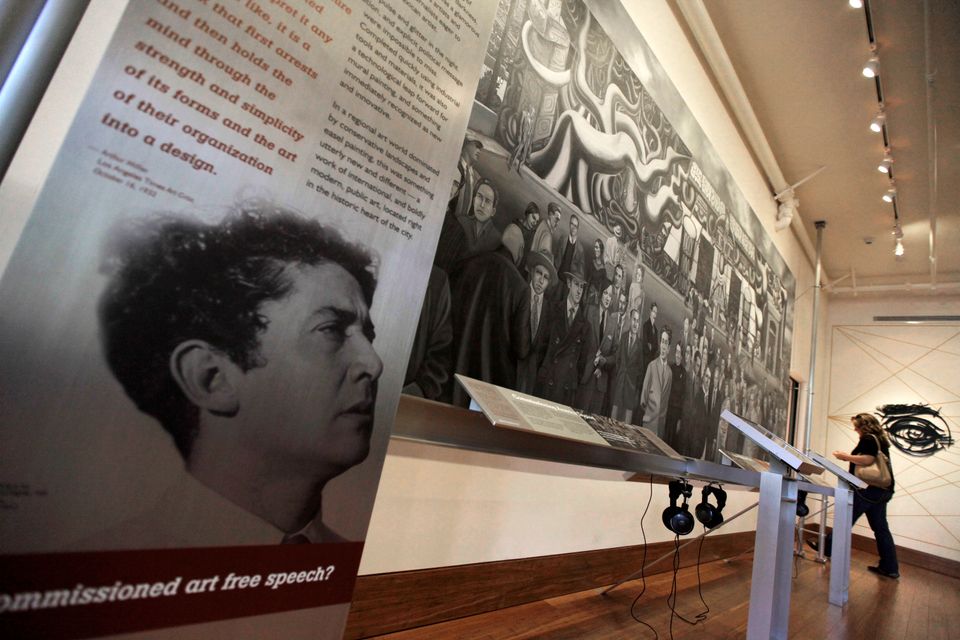 1 / 7
David Alfaro Siqueiros, America Tropical
This Oct. 4, 2012 photo shows a photo of David Alfaro Siqueiros with a black-and-white copy of his mural, "America Tropical," with other famous artists of the day, at an interpretative center inside Sepulveda House in the El Pueblo de Los Angeles Historical Monument in downtown Los Angeles. The Getty Conservation Institute and the city of Los Angeles have collaborated on the mural's conservation since 1988. (AP Photo/Reed Saxon)
AP