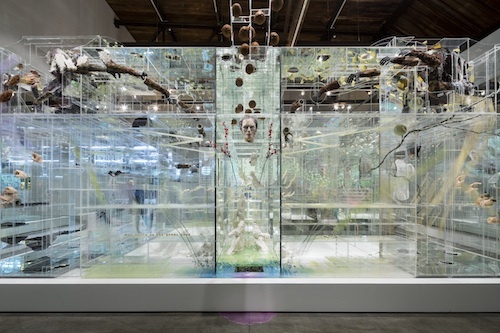 The materials frequently seem to be punching through each other to create new substances, reveal more detail in the work or subvert the lifelike figures that he has created. His sculptures range from realistically proportioned but gently mutated humanoids in eye-catching color schemes ("Untitled 1 (The Watchers)"), to abstract, organic shapes in a single shade ("Cave (Blue)"). His first French retrospective entitled, "Flux" at MAM Paris includes unshown and older pieces from throughout Altmejd's career alongside his 2014 work, "The Flux and the Puddle."

Altmejd's work strongly bears the influence of cinema's outer limits: the most obvious visual references are the monster-filled dreamworlds of David Cronenberg and David Lynch. Huge, semi-flayed totemic men, prowling bird-headed businessmen, the fragile white Giacometti-like human figures of his "Bodybuilders" series and the geometric mirror-and-wood industrial structure of his 2004 piece, "The University" are all highlights.

However, most eye-catching of all -- and perhaps most illustrative of the scope of Altmejd's talents -- is his 2014 monumental sculpture, "The Flux and The Puddle." Something close to a complete, imagined ecosystem under plexiglass, this vast, room-filling piece arranges everything from aqua resin and burlap to coffee grounds, metal wire and acrylic paint under fluorescent lights. Each different viewing angle reveals new detail and new scenes. The end result is something like a futuristic modeling of Hieronymus Bosch's "Garden of Earthly Delights,"or a three-dimensional creation of the more fantastical panels from an Alan Moore comic. For an artist to move beyond and away from an established, successful style is always brave; for them to do it in such extravagant style is truly remarkable.

David Altmejd "Flux" is on view at MAM Paris through February 1st, 2015. After that, the exhibition will travel to MUDAM in Luxembourg (March 7th -- May 31st) and then MACM in Montreal (June 18th -- September 13th.)

Justin Quirk is contributor to ARTPHAIRE. He is a journalist and editor based in London, England. He is editorial director of House, the Soho House Group's quarterly culture journal, and also of Victor, Hasselblad's photographic biannual. He writes features for The Guardian and Sunday Times newspapers, Wallpaper* magazine and Phaidon's Agenda site. When not working he mentors young creatives at The Cut, he writes graphic novels and curates exhibitions for the Canadian artist Nathan James. 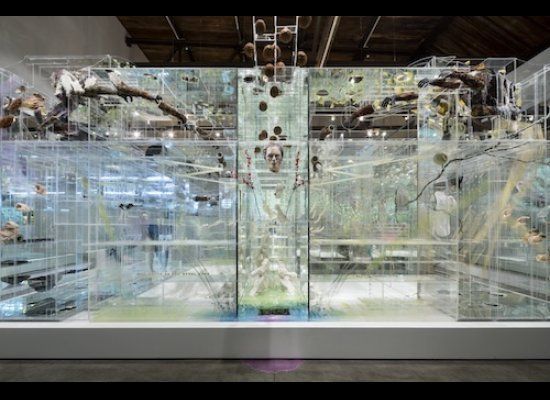