It's official: the Beckhams are taking over the world...er, the fashion world, at least.

The soccer stud told the fashion newspaper, "Over the past year, I've been developing my Bodywear range with my team and I'm extremely positive about what we have designed and produced. The final piece in the jigsaw was a retail partner who has the vision and capability to distribute these products globally."

Vogue UK quotes Beckham's business partner Simon Fuller as adding, "This partnership with H&M is an important step in the evolution of David's journey from sporting hero to entrepreneur and icon."

Beckham announced the introduction of bodywear back in May, previously explaining to WWD, "I have had the idea of doing a Bodywear collection for some time now. The push to do something of my own really came as a result of my collaboration with Armani. They told me that their gross turnover in 2007 was around 16 million euros [$22.7 million at current exchange] and after the campaign in 2008 it went up to 31 million euros [$43.9 million] in 2008."

At the time, he didn't mention any deals with fast-fashion chains, simply stating, "I can't wait to show people the collection -- although I'm not sure my mum will be too happy seeing a billboard image of me in underwear again."

Her boy is simultaneously working on the release of his third fragrance, Homme. And, of course, he's not the only tastemaker in the family. David recently told "Good Morning America" that designer-wife Victoria "lets me wear whatever I want to, but I definitely ask her for tips because it's what she does. She's great at dressing people. She loves her fashion, but most of the time it's me."

Must be tough. Take a look at the new logo for all of David's projects: 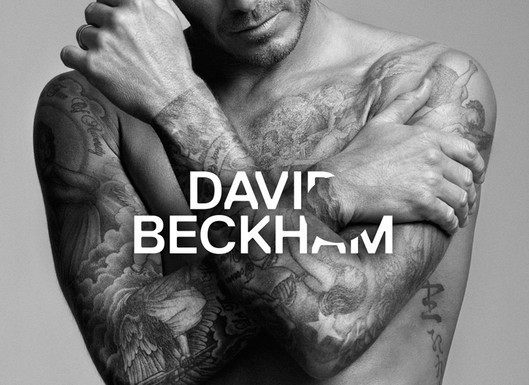