We caught up with David Bergman, a green architect, professor, and author, who also shared the below photos from his new book Sustainable Design: A Critical Guide (2012 Princeton Architectural Press).

GEC: It’s becoming increasingly obvious that sustainable design has had a real influence, but how do we get to the next step, to really get a big percentage of our built environment in line? One can point to the Nordic countries, California, and a lot of government spending as clearly heading in a green direction, and there are lots of LEED buildings now, but are we reaching a tipping point? What do we need to push it over? Education? Policy?

David Bergman: The major impetus we need, in some ways, has more to do with economics than architecture. We desperately need some form of carbon pricing. Were that in place, it would change the decision making on many of the materials and systems used in buildings, as well as the decisions as to where buildings will be located and how they will be massed. Carbon pricing would make anything related to consumption of fossil fuels, e.g. poorly insulated buildings and car-dependent locations, more expensive, and the alternatives relatively more affordable.

Short of carbon pricing (since our head-in-the-sand politics make it seem unachievable for now), we have to have tax and other incentives to “correct” the market and help people make better long-term decisions. So long as fossil fuels are subsidized and their environmental impacts are given a free ride, offsetting incentives to encourage renewable energy and renewable materials will be necessary.

All design processes are iterative, and sustainable is no different. A lot of hype on building-integrated wind turbines has not panned out in the real world in terms of real energy savings (Aerovironment’s designs were pulled off the market, the Times Square turbines were cancelled, Helix went under, etc.). The low-flow toilets in the Hearst Tower [where I used to work] were annoying; I once had to flush it 10x to get everything down, and 3-4 times was the rule for any #2. Are there particular lessons we can learn from the sustainable design movement to build on?

There’s a tendency in green building to use eye-candy tech to make buildings visibly green, to make them a statement. Some of these design elements are beneficial, but some are more superficial or, worse, greenwash. (I’m not implying, by the way, that water-efficient toilets are greenwash. Ours works very well and reducing water consumption is a necessity.)

It’s more critical to look at buildings as whole systems. How much can they be self-sufficient or impact free, both in terms of their materials and internal systems, and how they affect communities. Do they encourage walkability, for instance?

I once heard the editor of a major shelter magazine say “green is now passe, I mean once you’ve done something on bamboo you’ve about covered it,” so how do we make it timeless?

It’s true it’s harder for shelter mags to write about graywater filtration or heat recovery ventilators; they’re not visible or sexy. But I think it’s okay — and perhaps a positive sign — that green may be becoming passe in the sense that it’s no longer unusual and is an accepted, perhaps integral, part of building design. I think we’re going through an adoption period in which we started building in the mid-twentieth century without environmental considerations because, well, we could due to advances like air conditioning in combination with underpriced energy. Then we entered a period I’ve called “Green Design as Unusual” where we experimented with things ranging from solar panels to Earthship houses made of old tires.

I think we’re now in what I’m labeling the “Green Design as Usual” period in which we’re beginning to see ecodesign become an expected part of any design. And my prediction is the next phase will be simply “Design as Usual” in the sense that environmental considerations will become as integral to design as, say, structure or circulation.

Critics of green jobs say they haven’t materialized as promised in the green building sector and elsewhere. What’s the next step to growing the industry?

There is also a lot of counter evidence that says green jobs are growing much faster than conventional industries. Some of that debate depends on how you define green jobs.

We have an unfortunate tendency to focus on short term impacts such as quarterly reports. We have to recognize that fossil fuel- (or scarce materials-) based industries have a limited future whereas renewables, by definition, do not. The sooner we shift our industries, the better off we — as well as our descendants — will be. And the way to do is that is through correcting the market, as I mentioned earlier.

What education do we need to do yet for architects, designers, mortgage brokers, banks, and the public?

I think a lot of that again has to emphasize longer term as well as more holistic thinking. For instance, mortgage lenders and brokers don’t get that a high performance building (when designed and maintained properly) will result in lower operating costs. That justifies both a higher initial construction cost and the ability of the owner or tenant to afford higher monthly mortgage payments or rent.

There are also other methods, such as the leasing of solar panels, that can remove that upfront cost barrier and encourage longer term approaches.

Thinking more broadly, though, we need to get past the knee-jerk reaction that says green design costs more and involves sacrifice when, in fact, exactly the opposite is true. There are many, many solutions — both for building and the economy in general — that are win-wins: they benefit both the environment and the economy. In fact, as I write about in my EcoOptimism blog, they can be win-win-win in that we also end up with quality of life improvements.

David Bergman runs an architectural practice that emphasizes the transparent inclusion of sustainable/eco design principles. David is also the founder of Fire & Water, a designer/manufacturer of eco lighting. He is a LEED Accredited Professional and an adjunct assistant professor at Parsons the New School for Design. He is a frequent contributor to GreenHomeGuide.com. His book, Sustainable Design: A Critical Guide, was published in 2012 by Princeton Architectural Press. 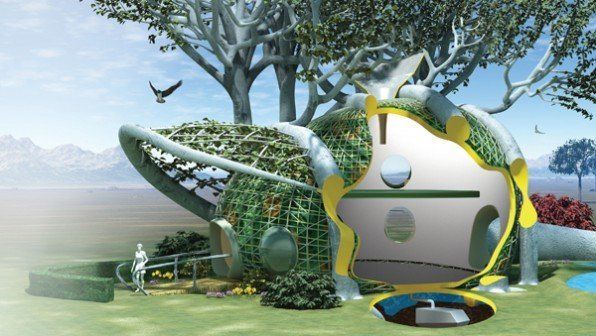 1 / 9
Fab Tree Hab
In the Fab Tree Hab concept by MIT designers, prefab scaffolding is grafted onto living trees, to integrate a dwelling with the natural environment. Art by Mitchell Joachim, Terreform ONE. <a href="http://www.greatenergychallengeblog.com/2013/01/17/new-book-is-a-tour-of-sustainable-design/">Photo courtesy of National Geographic/ David Bergman</a>
NatGeo/Mitchell Joachim, Terreform ONE