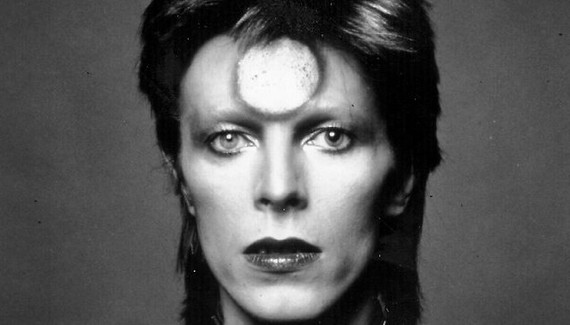 David Bowie, a musician and pop culture visionary known for his appearances in movies such as The Hunger and Labyrinth, first appeared before me on MTV sometime in the early 1980s. I'm pretty sure it was the video for "Let's Dance" -- when my exposure to music happening outside the United States and Puerto Rico began to explode. I wasn't an instant fan, but my first impression of the gaunt and pale Englishman was that there was something very unusual about him. In a great way. What that was I didn't yet have the vocabulary for. I was too young and inexperienced, but knew there was something strange happening within me as well, and that I related to him.

At age 17 I moved from The Bronx to Portland, Oregon, to live with my mother's family and threw myself into the small but active music and performance underground there. It was a different world than I was accustomed to, but there were many opportunities to meet other artists, with less financial and geographic barriers than New York had posed. I met musicians (who also happened to be heroin addicts) and it was through their musical and literary guidance that I was turned on to William S. Burroughs, the punk underground and the Beats, as well as 1970s-era Bowie, of which I'd heard very little as a Bronx-born Puerto Rican kid who grew up on salsa, disco and classic rock.

The 1990s rolled in and Bowie cranked out albums I wasn't crazy about, heading into techno territory to stay current -- or at least that's what it felt like. I yawned through the Trent Reznor collaboration while losing myself in the 1970s albums I still prefer: post-Ziggy, pre-MTV Bowie: Aladdin Sane, Diamond Dogs, Station to Station, Low and Heroes. I'd come out as queer in 1992 and found strange solace in his music, which catalogued the lives of gender-bending hustlers and featured vulnerable and vocal protagonists. Bowie, with all his theatrics and fearless gender plays, had become synonymous with the gay underground long before I'd arrived, as showcased by the rock music masterpiece Diamond Dogs.

I suspect that it's hard for folks to understand the stigmatization and alienation that came with LGBTQ life in those times, when we live in an era of televised gay marriage and increasing representation of LGBTQ folks in mainstream media and cinema -- in public office. The queer world Bowie witnessed and sang about was nothing like it is now; a world of clandestine affairs and nocturnal speakeasy dramas, of intimidation, deception and sadness. Of being classified a psychiatric nuisance to society by your own government and harassed for it. Vanguard artists like David Bowie threw all of that back into the face of the mainstream through the radio, television and silver screen: what was known as shock value.

The question of why Bowie had captivated me at a young age came up while having a conversation with another writer not long ago. My answer was that he'd been a very well-read and experienced man who expressed the universal by experimental means, by tapping into our tribal essence. This is best evident in his video for "Life on Mars?", where Bowie, dressed in powder blue and made up like a space clown gives us his shamanic best, while singing about a little girl's wondrous movie theater experience. Artists like Madonna would appear in the 1980s, to turn the sexual and gender politics of the recording industry upside-down, but Bowie was one of the first to attempt this at his peak. What would be considered cultural appropriation by the politically-correct set nowadays ("crossover" success then) had resulted in many career suicides for artists in his time, yet Bowie drove straight into danger at full speed, even making disastrous comments he'd later retract and regret.

It's been remarkable to meet and work with musicians I've admired over the years as an ex-musician myself, and two in particular; Steven Severin, cofounder of Siouxsie and the Banshees, and the avant-garde performance artist and musician/singer Diamanda Galás, both expressed to me their fondness for Bowie's chameleon talents and self-perpetuated mythology -- how it informed their artistic paths. A celebrity who was equal parts futuristic and pragmatic; a gentleman who always struck me as generous and keen, who went out of his way to understand how other people lived and felt in their skin as a born-and-bred Londoner, as evidenced by Brainpicking.com's publishing of David Bowie's Formative Reading List of 75 Favorite Books recently.

The critical thing David Bowie taught me as an artist and writer is that I can only be me, as only you can be you. Who taught me to go there. Who showed me that artists can turn their disadvantages to their advantage; to create things that rabble people's emotions and perceptions -- the more controversial the better. Whose final oeuvre was the engineering of his own mythological transmutation to the next plane; a global aesthete, student of philosophies and Buddhism, who gave everything he had until the very end.

May you rest in peace on Mars, Señor Bowie.