That may be because there are only 1,300 studying at this liberal arts college just north of Richmond along I-95, which was thrust into the national spotlight after Cantor's stunning loss to Brat in June's Republican primary.

On Tuesday, just a week before Election Day, Brat and Trammell, his long-shot Democratic rival, faced each other in their sole debate. They appeared in a Randolph-Macon auditorium packed with cheering students, fellow faculty and an inordinate number of reporters.

Brat, an economics and business professor, took a hard-edged tone, saying he would "repeal and replace Obamacare immediately." He noted President Barack Obama himself admitted his policies are on the ballot in November.

Trammell, a sociology professor specializing in disability issues, reminded the chuckling crowd: "President Obama is not on the ballot in this district. I just want to make sure everyone knows that."

The candidates casually referred to each other by their first names. They used to play on the same intramural basketball team.

Tiny Ashland, with its tongue-in-cheek slogan, "The Center of the Universe," is tightly linked with the college. The mayor is a physics and astronomy professor who introduced his candidate-colleagues.

In the student center, where the bookstore sells buttons and T-shirts proclaiming that the school is the "political center of the universe," some students said they leaned toward one candidate or the other, but were waiting for the debate before making up their minds. 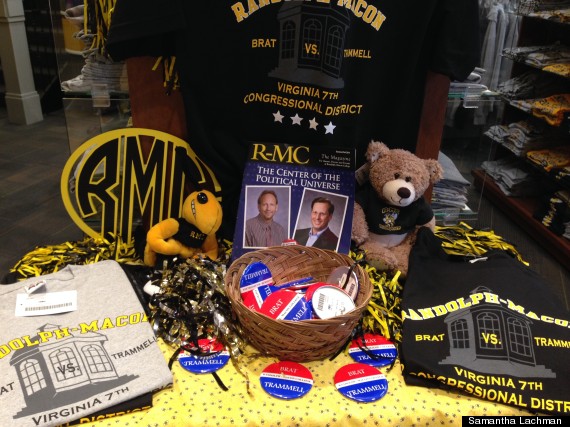 The moderators' focus on immigration allowed Brat to reiterate his opposition to comprehensive reform.

"I've taught Third World economic development, it's nothing against the people coming across the border," Brat said. "The reason the rest of the world wants to come here is because we have the rule of law." He added later: "Comprehensive immigration reform is a kind of code language that wants to go beyond secure borders. The crony capitalists want to bring in cheap labor."

Brat often pushed beyond the time limits on his answers, using economic theories and case studies to explain his positions. He repeated the line that the 7th Congressional District "needs to send an economist to Washington" so many times that the refrain was met with laughter toward the debate's end.

Trammell mostly followed the rules. He relied on personal anecdotes and community-based examples to explain why he supports raising the minimum wage, keeping the Affordable Care Act and easing the burden of student loan debt.

The debate rarely got heated, though Brat did elicit a laugh mentioning ads running against him on television.

"These false attack ads are not helping anyone and if I had [Trammell] in class, I'd give him an ethics paper and send him to the dean," Brat said.

"We need to elect people who are willing to work across the aisle and work in a bipartisan manner," Trammell said. "Dave and I have worked together for 15 years, so I guess that gives us some bipartisan experience, right?"

Outside the auditorium, students said they accepted that the district's strong Republican tendencies make a Trammell victory unlikely. But College Democrats President J.D. Rackey said the race has energized his group, which has hosted phone banks and voter registration drives.

Randolph-Macon professors haven't tried to persuade students to vote one way or the other, according to Rackey.

"They do a good job separating that from what they're trying to teach us," he said. "Most of the professors haven't taken a side in the classroom, but you'll get a more candid response outside of the classroom."

Indeed, some of the analysis swirling around the campus sounded like a political handicapper's blog or MSNBC roundtable.

"People are starting to see that some of the ads aren't totally positive," Charlotte Horne, the Young Republicans treasurer, told HuffPost. "It's not horrible, it's not like the Senate ads between [Sen. Mark] Warner and [Republican Ed] Gillespie, but it's been pretty calm and I think the school has had a lot to do with that. No one wants the school to get a bad name."

Randolph-Macon has hired a PR firm to capitalize on the attention. A fraternity was rumored to have been forced to take down a large sign supporting Brat so not to disturb the cultivated atmosphere of jovial bipartisanship.

"It might be indirect pressure from the school," Keith Jones, the Young Republicans' vice president, told HuffPost. "I'm not sure they were saying, 'Don't say anything bad,' but they don't want the race to reflect badly on this place."

There's an academic study of the race, too. Sophomore P.J. Costello is in a leadership seminar created solely to follow the campaign. Participants will collaborate with another class to conduct an informal voter exit-survey on Nov. 4., and then will track the winner's transition to Congress.

"Both candidates are extremely personable, both want to separate themselves from Washington insiders and make the constituents feel like they have a say," Costello said. "Obviously Eric Cantor learned that the hard way."

"No matter who wins, a professor of ours will be in Congress," Maxwell said. "Randolph-Macon is represented either way."