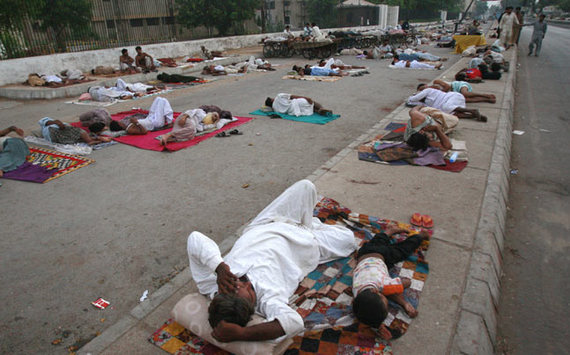 The same day that David Brooks accused Pope Francis of doom-mongering about the threat of climate change, Al Jazeera reported that over 700 people died during the first three days of a heat wave in Pakistan.

In a recent New York Times column on climate change, David Brooks gets everything wrong.

Legitimate warnings about the perils of global warming morph into 1970s-style doom-mongering about technological civilization. There are too many overdrawn statements like "The earth, our home, is beginning to look more and more like an immense pile of filth."

To Brooks, who has a cushy job as a columnist for one of the most prestigious newspapers in the world, espousing the very real threats of global climate change too loudly seems silly. In effect, he's telling the rest of the world to stop taking the issue so seriously. He's telling the hundreds of thousands of people in China who have died of pollution-related lung cancer each year, the people of Kiribati who live on an island nation sinking into the waves, and the millions of people in the world that actually live in immense piles of filth caused by our collective consumption, to just calm down.

For many people who are not fortunate enough to hold Brooks' privileged status in society, the problems of climate change and dependence on fossil fuels have existed for decades. Just ask the indigenous groups in Ecuador, where Texaco dumped around 19 billion gallons of toxic waste in community water supplies during its operations in the country between 1962 and 2001. Such sacrifice zones, where the health of people deemed expendable is severely damaged, have always been required for fossil fuel extraction efforts.

Today, these sacrifice zones are closer to home than ever, as American families who live by fracking sites find that they can light their water on fire, a phenomenon caused by the leaking of natural gas into the groundwater. Of course, Brooks has never been in this situation. But just because he can't see the filth or feel the fire doesn't mean those things don't exist.

Brooks commits his second egregious error when he mentions only carbon emissions in his discussion on fracking, which is terribly misleading.

While fracked natural gas does reduce carbon emissions in comparison to coal, it also releases methane. Methane traps heat 34 times more effectively than carbon dioxide does. According to a 2011 study from Cornell University, this means that fracked gas actually has a greater greenhouse gas impact than oil and may have as much as a warming impact as coal does over the long-term.

To say that fracking is environmental in light of this evidence - which Brooks could have easily googled - is absurd. Even with regulations that help reduce the level of methane fracking releases, fracked gas will never be a proper substitute for renewable energies, especially since it still releases carbon emissions and causes terrible environmental damage in the sacrifice zones where it is extracted.

Sadly, Brooks' failed analysis of climate change and fracking is all too typical of today's conservatives. In an effort to make the economic viability of fossil fuel companies compatible with the laws of nature, Brooks downplays overwhelming scientific evidence against fracking because it is directly at odds with the interests of unregulated, infinite growth capitalism.

In reality, such endless growth is impossible. As Pope Francis observes in his encyclical,

The idea of infinite or unlimited growth, which proves so attractive to economists, financiers and experts in technology . . . is based on the lie that there is an infinite supply of the earth's goods, and this leads to the planet being squeezed dry at every limit.

Californians, who face rapidly shrinking groundwater supplies, will be the first of many groups of people in the United States to realize this harsh truth. Given his role in shaping public opinion, Brooks would do well to acknowledge it, too.

The same day Brooks' column was released, Al Jazeera reported that 700 people died during the first three days of a heat wave in Pakistan - a reminder that while individuals in influential positions like Brooks continue to scoff at the warnings of the scientific community and mock the sufferings of the public, the rest of the world, quite literally, burns.