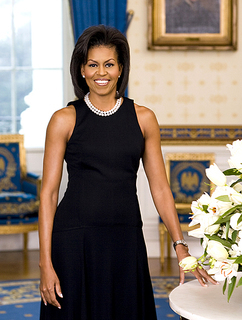 Alert the media! Michelle Obama is showing arm. Because a dress up to her neck isn't covering enough, at least according to the quivering Mr. Brooks.

Maureen Dowd decided to lift Washington's shirt on this one yesterday. There was Clinton cleavage-gate, now we've got Michelle Obama's biceps stirring the fears of Washingtonians. Of course, all of this comes to us compliments of Washington's gossip columnist Maureen Dowd, who decided to dish about a cab ride she took with her New York Times colleague David Brooks. However, unlike Dowd's never ending Clinton hatred, she evidently finds Michelle Obama the strongest person in town, by virtue of "Thunder and Lightning," as Brooks calls the First Lady's biceps:

In the taxi, when I asked David Brooks about her amazing arms, he indicated it was time for her to cover up. "She's made her point," he said. "Now she should put away Thunder and Lightning."

I'd seen the plaint echoed elsewhere. "Someone should tell Michelle to mix up her wardrobe and cover up from time to time," Sandra McElwaine wrote last week on The Daily Beast.

Washington is a place where people have always been suspect of style and overt sexuality. Too much preening signals that you're not up late studying cap-and-trade agreements. [...]

Time for her to cover up, clucks Brooks.

If this doesn't say it all about the spineless upper echelons of the traditional media. First you've got Brooks offended because the First Lady has sculpted biceps where he doesn't. Secondly, you've got Maureen Dowd writing a column on it, though she does give Mrs. Obama her due, while not missing the opportunity to whack Hillary Clinton yet again.

Brooks babbles on, the fear of Mrs. Obama's biceps dancing across his brain. Something about it must take him back to high school.

He said the policy crowd here would consider the dress ostentatious. "Washington is sensually avoidant. The wonks here like brains. She should not be known for her physical presence, for one body part." David brought up the Obamas' obsession with their workouts. "Sometimes I think half the reason Obama ran for president is so Michelle would have a platform to show off her biceps."

Women's prowess of mind has been emasculating the pyramids of power in this country for decades. Now it seems Michelle Obama has tipped the scale with her new weapons, Thunder and Lightning, putting the physical fear of retaliation at the right-wing weaklings' doorstep, while revealing a consummate conservative horror. The trepidation they have with all things sexual when it comes to women. Men are to be macho, testosterone pumping kings, while women should know their place as these perverts to personal privacy tell women what to do with our bodies, as well as what's appropriate to wear especially when our bodies are stronger than theirs, and even if we're covered to the neck.

Brooks' Talibanic protestations are symbolic of all things amiss with Republicans who refuse to come into the 20th century.

Somewhere I think I hear Camille Paglia laughing, as she wrote the book on sexual persona a long time ago.

The male ego is a sexual persona (the Latin word for mask)-one of many personae adopted at different times and for different reasons by different people-that reduplicates itself in phallic monuments and skyscrapers (stairways to the sky, the sun, to Heaven), in religious doctrines that designate women as the servants of men, in plays were "shrews" are to be tamed. By controlling "their women," men are attempting to control "nature," the ultimate representation of POWER. But deep down they know that, like their own penises that shrivel into a flaccid strands of flesh once orgasm has been achieved, their own power is fleeting. So they fight and fight the unwinnable war-and Western Culture is the dazzling carnage their havoc has wreaked.

Neither David Brooks or Rush Limbaugh, the Republicans' current king of conservatism, could take on Michelle Obama in any manner of voice, spirit or physical persona. That first ladies are to be seen, not heard, and certainly never feared, is the never ending message from these men. Hillary Clinton broke the mold on the role and it looks like Michelle Obama is going to take it the rest of the way. That she's doing it in grand style while leaving cowering, wimpy conservatives in her wake is just a bonus.