David Brooks's facile, distorted representation of the state of education reform in The New York Times made me wring my hands. In his first paragraph, he speciously outlines two distinct camps of education interests:

On the one hand, there are the reformers like Joel Klein and Michelle Rhee, who support merit pay for good teachers, charter schools and tough accountability standards. On the other hand, there are the teachers' unions and the members of the Ed School establishment, who emphasize greater funding, smaller class sizes and superficial reforms.

Problems abound. Let's start with the idea that teachers are villains:

Newt Gingrich made a similar pitch about the "Ed School establishment" when I saw him speak earlier this year, castigating schools of education, departments of education, and teachers' unions as an unequivocally worthless three-headed monster who will stop at nothing to defend their failed schools. Under this Brooks/Gingrich ideology, just about everyone who actually spends time in classrooms is contaminated, reflexively anti-reform, and ought to be thrown overboard, paving the way for a free-market model where teachers and students are paid for higher test scores, and collective bargaining for teachers is a farce of the past. That's a dangerous road.

Also, what's up with Brooks's bizarre conflation of greater funding and smaller class sizes with superficial reforms? Last year at a Bronx public school I taught high school English classes of 33 students. This year at a Washington DC charter school, my classes range between 7 and 20 students. The difference in the attention I'm able to give my students is profound, and it's reflected in their learning. Education is a person-to-person endeavor. Smaller, more personal learning spaces are essential; implicitly labeling a campaign for them as "superficial" holds no water.

And Joel Klein as the reformer hero? Under his tenure, New York City has experienced runaway standardized testing and schizophrenic, punitive assessments for schools , and all under the co-opted banner of "accountability." Teachers and parents are demoralized, and the test scores are stagnant. Handing him the reins of American public school is not the answer.

Michelle Rhee, receiving props from the left and right for her hard-charging methods, is the other "reformer" hero of the moment, currently gracing the cover of Time Magazine with a broom and a frown. I am rooting for DC schools to improve, but Rhee's nuclear approach to administering a catastrophically plagued system in the nation's capital is not at all what the doctor ordered for most of America. 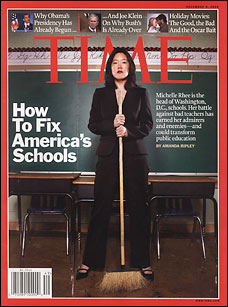 Darling-Hammond, a professor at Stanford, is a sharp critic of Teach for America and promotes weaker reforms.

Many are still steamed at Darling-Hammond, a teacher quality expert, for her 2005 study "Does Teacher Preparation Matter?" which pointed out that Teach For America corps members leave the teaching profession more quickly than other teachers. Actually, Darling-Hammond has a great deal to offer as a reformer, not a smasher, of the American school system.

In the conclusion of her essay From "Separate but Equal" to "No Child Left Behind", she writes:

...Although there is a strong privatization instinct in Washington at the moment, the American people reiterate in poll after poll that they support public education, are willing to invest in it, and expect it to be a leavening agent for society-- in fact, some might argue, the only one left in America. While there are improvements to be made in schools, schools... will meet the aspirations Americans hold for them only if they are given intelligent guidance and the critical supports they need, while children are assured the health and family supports that allow them to be ready to learn.

Darling-Hammond sees value in nurturing and supporting teachers, not running them out on a rail based on high-stakes test scores. She sees collective bargaining for teachers as fundamentally fair. She understands that while our situation is urgent, we don't need to resort to shock doctrine-caliber panic and blow up our whole system. President-Elect Obama made an excellent choice in bringing her on his team.

David Brooks offers Americans a false choice. Here's hoping our new president will sweep aside that brand of discourse.

Dan Brown is a teacher in Washington, DC, and the author of The Great Expectations School: A Rookie Year in the New Blackboard Jungle. He is not a member of any teachers' union.