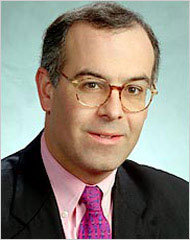 Editor & Publisher notes an interesting/worrisome exchange yesterday on "Meet The Press" between David Brooks and Bob Woodward. In a discussion about pulling out of Iraq, Brooks warned that pulling out would mean certain genocide in Iraq, and wonders "[A]re we willing to prevent 10,000 Iraqi deaths a month at the cost of 125 Americans?" That's the sort of statement that, left unquestioned, can harden pretty quickly into fact. From the transcript:

Did you catch that? Thank goodness Bob Woodward did — because it took two follow-up questions to get Brooks to actually admit that the number he cited was not only not sourced but was clean made up. Here's the John Burns comment referred to above:

"It seems to me incontrovertible that the most likely outcome of an American withdrawal any time soon would be cataclysmic violence. And I find that to be widely agreed [among] Iraqis, including Iraqis who strongly opposed the invasion."

But hey, at least it's sourced at all — unlike the numbers in his most recent column on the subject from July 13, 2007: "The Endgame Deadlock" noting that "ending a war is as complicated as starting one" (which of course means that it shouldn't be ended until the very last second!). Here's what Brooks asserts:

First, is genocide inevitable? Some anti-war advocates believe Iraq is so broken that genocide is unavoidable, and we might as well get U.S. forces out of the way. Others find this view abhorrent and shortsighted.

Which advocates? What does "genocide" mean, and how is it different from now? Who remembers the
agonizing parsing
of the term "civil war," God forbid anyone should date to use it? When did "civil war" become "genocide" (and not "sectarian violence") — and where are the facts to support these contentions either way? And, here:

Brooks cites "some" who "argue", "others" who "believe" and says: "It will take 3,000 huge convoys and 10 months to get out" — presumably true, but why does the reader have to presume? This column is a far cry from the type of pieces offered by Frank Rich, with link-heavy columns specifically backing up statements with sources and stats. You'd think that would be a de minimis standard for the New York Times op-ed page, and you'd hope it would be for "Meet The Press" — but alas, Russert is not usually one for a gotcha that hasn't been laid out in advance (see this most glaring example here) — and were it not for Woodward challenging Brooks on this point, it's the type of stat that might have been picked up, thrown about and multiplied like brooms in "The Sorceror's Apprentice." Troubling to be sure, but not as troubling as the fact that Brooks did it in the first place — and then, almost believed it. Good thing we've got a stickler like him on the case.