For the past week, the hashtag #traditionallysubmissive has been trending on Twitter. David Cameron implied that in many traditional Muslim cultures, the role of women is submissive, and that we should perhaps try and adopt policies in this country to make sure that women from those kinds of backgrounds are not marginalized, but instead are given every opportunity to become full, thriving members of our society. Cue an onslaught of thousands of Muslim women who took to Twitter to post pictures of their achievements to prove that Muslim women are not, in fact, "traditionally submissive".

So let's try and make sense of this. Had, the Prime Minister said that (all) Muslim women in general are submissive, that would have obviously been a monumentally stupid thing to say. Did he actually say that? No. A government source said that there is a cultural tendency amongst traditionalist Muslim cultures to regard it improper for women to be socially assertive. Much like our own culture would have done up until the last few decades. The words "traditionally submissive", if indeed they had been said as such, are not the choicest. And if an adult, white, male, British politician said that out loud it would inevitably reek of some kind of underlying prejudice or even racism. It is the sort of thing Nigel Farage would say without any comprehension of why it is a stupid thing to say. But it is not even clear that Cameron actually said those exact words.

So were the thousands of women who took to Twitter wrong to do so? Strictly speaking, they have done so in error. But in the wider context of where our political discourse is, it is perfectly understandable that they would leap on an opportunity such as this, even if misconstrued, to vent their frustration. "The Muslim Woman" is, in the way we casually drop stereotypes in political conversation these days, truly the most pathetic character: forever condemned to be a wilting flower hidden from the world under a black veil, any protestation of empowerment and self-worth casually dismissed by even the most sympathetic commentator. To constantly have to defend the value of your own existence against this kind of nonsense would probably drive any of us up the wall.

So how about we try to go through the facts, for a change. Are there thousands of "traditionally submissive" Muslim women? No. Nor many hundreds of thousands like them. This is not about (all) Muslim women. Are there women in Britain today who are being marginalized and deprived of the chance to be full members of our society within the context of traditionalist patriarchal cultures in Muslim ghettos all around the country? Absolutely.

It may not be solely a Muslim thing, or inherently to do with Islam, but it is probably the case that we have the biggest problem in this regards in our communities, and we have to own that. There are tens of thousands of Muslim women who are brought over, especially from the Indian subcontinent, just to have their children and look after their household by men who have no intention of making them full participatory members of society because either they have outdated views on the role of women in society or they enjoy the single lads lifestyle too much. I know many families in that situation myself.

Saying that this sort of thing happens should not be taken as offense by people who are perfectly accomplished and should not feel they have anything to prove. This is not about you. This is about tens of thousands of Muslim women who should have every chance to be as accomplished as you are, but to whom we, as a society, are failing to give those opportunities. 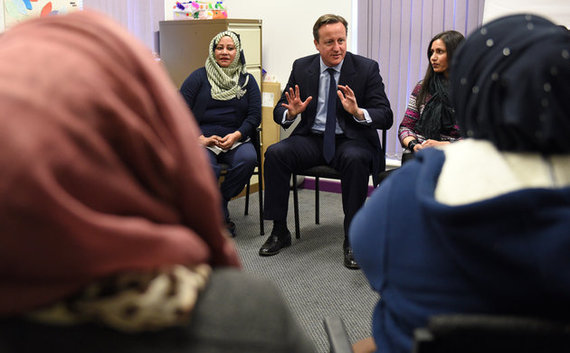 Muslims make up a disproportionate number of prisoners in the UK. They are 5% of the population but make up over 15% of prison population. Muslims are at the bottom of the social economic ladder of all minority groups with the least educated and least in professional jobs, with Pakistanis and Bangladeshis right at the bottom of all ethnic groups. Those are just facts. If I post pictures to Twitter about the fact that I, personally, am a Pakistani origin Muslim and an academic and successful businessman, that does not say anything. Nor am I doing anything to help that situation.

The problem the Prime Minister identified in some of our communities is very real. And if he has ideas about how to tackle that problem, we should invite him wholeheartedly to speak. I'm not sure threatening to deport vulnerable women is the most brilliant idea anyone ever came up with, but surely getting these women to speak English is a bare minimum we should be doing. So how about less posturing, both from the Prime Minister and his deportations, and from ourselves, and more solutions to this genuine problem?

Dr Azeem Ibrahim is an RAI Fellow at Mansfield College, University of Oxford and Research Professor at the Strategic Studies Institute, US Army War College.