That's why the 12-year-old from Dallas invented a robot that drowns the pests using a pump-jet system that traps them underwater using mesh. He submitted his work to the Discovery Education 3M Young Scientist Challenge earlier this year and is one of the competition's ten finalists.

The challenge, which is open for students who are in grades 5 through 8 at the time of submission, awards its winner $25,000, the title of "America's Top Young Scientist," and an all-expenses paid vacation. A victor will be decided after finalists present their work on Oct. 13 and 14 in St. Paul, Minnesota.

While Cohen pointed out to The Huffington Post that malaria, a mosquito-borne illness, kills roughly 627,000 people each year -- predominantly in developing regions of sub-Saharan Africa -- Cohen said he got the idea for the project after his own family was affected by the dangerous pests.

"My sister actually got a pretty bad staph infection from itching a mosquito bite," he told HuffPost in an email, noting that mosquitoes love Texas' hot and humid climate. "She was in a lot of pain and could barely walk. It took her a couple weeks to heal with heavy antibiotics."

Like the other finalists, Cohen was matched with a mentor to help make his work become a reality. The high school freshman was paired with Delony Langer-Anderson, a 3M advanced new product development specialist in the Consumer Health Care Division. 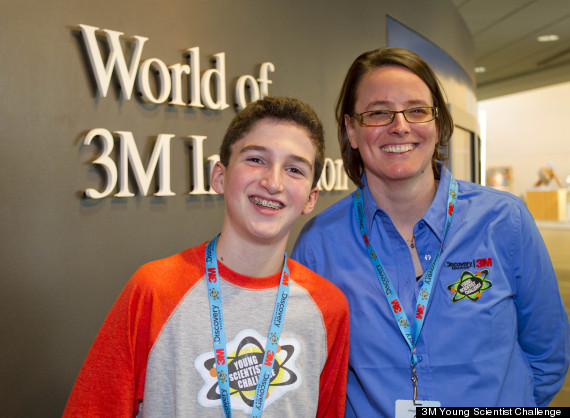 Langer-Anderson, who helped connect Cohen with experts in mosquito-borne illnesses throughout their mentorship, said the Dallas preteen's unique perspective makes him a standout scientist.

"David looked at the problem of mosquito-borne illnesses in a different way," Langer-Anderson told HuffPost in an email. "He asked, 'What if the mosquito was never born?' As he's worked through prototypes and ideas, he's never lost sight of the idea that if he can stop the mosquito from emerging from the larvae stage, he can prevent them from spreading diseases."

Langer-Anderson said that while it remains to be seen if Cohen's invention will decrease the number of cases of diseases like malaria or West Nile virus, the fact that young people are already solving real world problems is a great sign.

"I think that people like David have the potential to impact the futures of people living in our country and in developing regions of the world," she said.