Comedian David Cross and his fiancé Amber Tamblyn appeared on stage for the first time together at a comedy show in NYC on Thursday, and unlike most interviews with Cross, there was little mention of the "Arrested Development" movie.

Instead, the couple shared some intimate (and funny) details of their courtship to a sold-out crowd attending "Running Late With Scott Rogowsky," a live comedy talk show at The People's Improv Theater. Tamblyn, the 29-year-old actress who starred in the "Joan Of Arcadia" TV series and "The Sisterhood Of The Traveling Pants" has been with Cross, 48, for over four years; the wedding is in less than six months.

But much like the beginning of their appearance on "Running Late" (Tamblyn was tardy due to a last-minute bathroom visit) the early stages of their romance had plenty of awkward moments.

"I was slow to make any moves because of our age difference, and also because she was a fan," Cross said after explaining how they'd often see each other around Los Angeles, at network Upfronts and awards shows like the Golden Globes. Tamblyn immediately poked fun at his mentioning the age difference: "If anyone's wondering, I'm 14!"

When Cross was asked to explain how he and Tamblyn got together, he gestured for Tamblyn to take the lead.

"There are 1,000 jokes going through my head right now," she joked, then detailed their first encounter on a connecting flight from Houston to Louisiana. After what Cross described as "aggressive staring" coming from Tamblyn, they changed seats so that they could sit together and spent the rest of the flight making fun of the SkyMall catalog.

"He was in the seat next to me and I was like, 'Oh my God, that's David Cross!'" Tamblyn admitted, adding that she then got a "tiny baby tent" while pointing to her crotch area (odd, but oddly adorable).

Cross swooped in with some genuine sentiment, saying "It was so obvious" that they were going to be together after that. He also offered the story of their first kiss, the soundtrack of which was the "Spider-Man" theme song ("Not the movie -- the TV show," Tamblyn interjected).

"I took the opportunity to say, 'Hey, this is our song" Cross said and got a laugh. Tamblyn imitated Cross creepily whispering, "this is our song" in her ear mid-kiss while "Spider-Man, Spider-Man, Does whatever a spider can..." played in the background.

After they started dating, Tamblyn introduced Cross to her world of poetry readings (she is also a poet and has a poetry book featuring art by Marilyn Manson coming out next year). She admitted that the first reading she dragged him to was "really bad" and "like an open mic." She then mimicked an over-the-top beat poet talking about vaginas and freedom. Cross confessed that if the next one she brought him to hadn't been good (it was) then he was going to have to break up with her despite liking her so much.

Toward the end of the show Cross showed Tamblyn's cameo in the pilot episode of "The Increasingly Poor Decisions Of Todd Margaret" (below). When asked if it was awkward to "break up" in a show, Cross said, "No, it was great! I saved like $5,000," to which Tamblyn replied, flatly: "I lost 150." 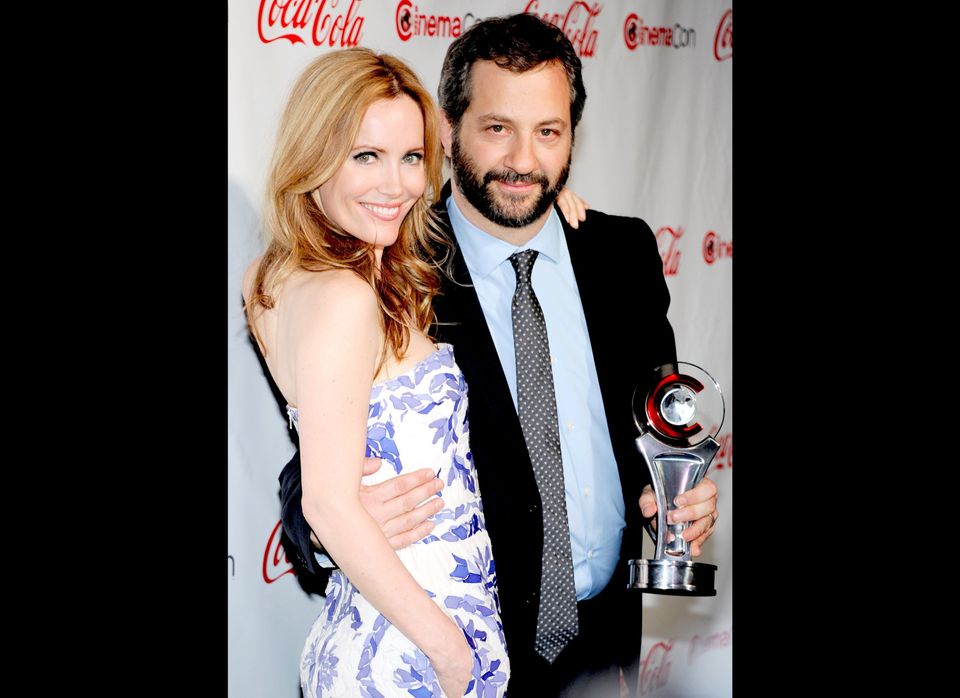 1 / 19
Judd Apatow And Leslie Mann
Apatow and actress Leslie Mann have been married for more than 10 years and have two daughters together.
Getty