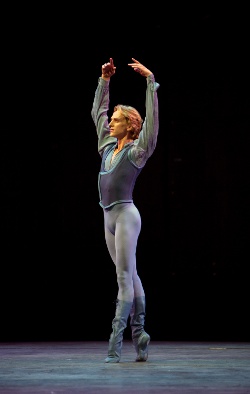 When we last saw David Hallberg -- the first American to join the prestigious ranks of Bolshoi Ballet principal dancers -- he was clamoring through modern works by Nacho Duato and Mauro Bigonzetti as a guest artist in "Kings of the Dance" at Segerstrom Hall in Orange County. That was just a few weeks ago.

This Sunday, November 20, ballet's blonde wonder will pop up on movie screens across the nation as Prince Désiré, partnering Svetlana Zakharova as Princess Aurora, in the Bolshoi Ballet's Petipa-Tchaikovsky war horse, "The Sleeping Beauty." It's a chance to feast our eyes on Hallberg only two months after he dropped the bomb that he would relocate to Moscow and join the Mother of all ballet troupes.

[In another dance-world shocker, we just learned that Hallberg's buddies, the couple in life and on stage, Natalia Osipova and Ivan Vasiliev, will leave their home at the Bolshoi and transfer to the Mikhailovsky Ballet in St. Petersburg.]

The broadcast this Sunday (repeats on November 22 and December 6) is the dance world's latest foray into the high-definition arts broadcasts that have proven so successful for The Metropolitan Opera. 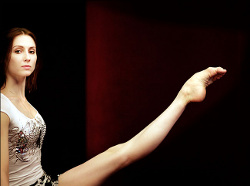 Since the Soviet era, Russian state-run television has broadcast Bolshoi performances to a nation of ballet fanatics. But now they have a secret weapon for the U.S. market with broad appeal. Everyone is hankering to see the South Dakota-born Hallberg jeté around the Bolshoi's fabled raked stage. (The 19th century theater just underwent a $700 millon-dollar redo.) This approach of bringing ballet internationalism into the American heartland -- with popcorn -- may prove to be ballet's smartest business move in decades.

Dance insiders note that the Bolshoi simulcasts sweetened the attraction of Hallberg's move to Moscow. Implemented with U.S. partners, New York City's Emerging Pictures and its Ballet in Cinema program, with Colorado-based NCM Fathom joining for this particular performance, the screenings expand exponentially Hallberg's global exposure. All those eyeballs on screens represent a huge multiplier factor to what American Ballet Theater can offer the 29-year old prince on a given matinee at New York City Center, or even at the Met. And up rachets his value as an entertainment asset.

Nearly four hundred cinemas throughout the nation have scheduled "Beauty" screenings. For the diehard balletomane, real-time broadcasts start at 10 a.m. in New York; one brave West Coast outlet, Phoenix Big Cinemas Dos Lagos Stadium 15 in Corona, outside San Diego schedules a show in real time, at 7 a.m.. Others sprinkle re-broadcasts throughout the day, then again on November 22, and December 6.