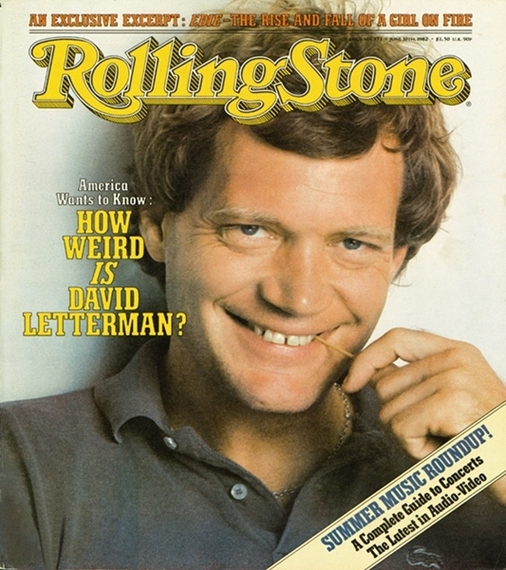 David Letterman's retirement announcement is one of those moments to take stock and say, "Yeah, I'm old." Not ancient, or over the hill. Wizened, maybe? This happened a few years ago to me when another pop cultural institution I grew up with, R.E.M., called it quits. Like Dave, their great years were surely behind them but they were still capable of a blast or two of vitality. Also like Dave, they first emerged into some form of recognition in 1982, releasing the Chronic Town EP in the same year Late Night with David Letterman premiered on NBC. So it's fitting that the first leak of Dave's surprise in-studio reveal came on Twitter from former R.E.M. bassist Mike Mills who was one of the musicians on the show during the taping.

That being said, I've noticed a few reactions to David Letterman's retirement announcement that bring up the idea that he may be stepping down because he never "got" the viral video phenomenon that the Jimmys -- Fallon and Kimmel -- have so clearly mastered. I say, nuts to that. Letterman invented viral videos -- we just called them "watercooler moments," and they were spread with your lips, not your fingertips.

In fact, almost every content move you can make online was done by Letterman first and in many cases better. Here's a Top 10 List to prove it:

It is worth pointing out that almost all of these were staples of his NBC show, and were mostly absent on CBS with the exception of the Nos. 1 and 2. It's not that Letterman didn't know how to create buzzworthy content. He just didn't feel the need to chase it. More to the point, he matured and evolved his act.

In his great book on the original late-night wars, The Late Shift, Bill Carter wrote about how Letterman felt that he had to tighten up his show and mature it to get the coveted Tonight Show slot. Though he didn't end up with the prize, what he did on CBS is very much that vision: tailored suits replacing sports coats and a curmudgeonly but fundamentally gentle Dave in place of edgy sardonic Dave.

What has changed perhaps is that Letterman's innovations are mainstream. The meme-friendly bits that fill late-night now are as much from Letterman as they are from Instagram and YouTube. It's just been easy to forget because on CBS Dave has moved past that and Dave won't kowtow to the fickleness of audience demand and network execs. He won't do something if he doesn't feel it -- just like the most successful digital stars, Dave has maintained something that Leno always struggled with: authenticity.