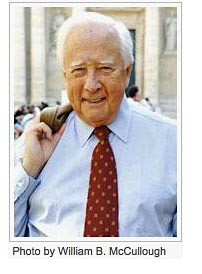 Available just today, May 5th, eminent historian and scholar David McCullough's latest book, The Wright Brothers (Simon & Schuster), is expected to be a best seller and Tom Hanks, in partnership with HBO, will produce a miniseries based on McCullough's book.

So, it was of great interest to this writer what David McCullough had to say about Connecticut resident and German immigrant Gustave Whitehead and his alleged flights of 1901 and 1902.

The answer is... not a great deal, only one paragraph on page 260, but what he does write is utterly dismissive of the Whitehead story.

"Of further aggravation were stories of others who had supposedly achieved flight before the Wrights, the most annoying being that of a German American named Gustave Whitehead, who was said to have flown a plane of his own creation in Connecticut in 1901 and 1902. The story was entirely without evidence and wholly untrue, but kept drawing attention as the years passed to the point where Orville finally felt obliged to denounce it himself. In an article titled, 'The Mythical Whitehead Flight,' published in U.S. Air Services in 1945, he made plain that Whitehead was a man of delusions. Strangely, the story still draws attention, despite the fact that there is still no proof."

Given that this is David McCullough speaking to us -- the person who has been called "America's Greatest Historian" -- can anyone truly dismiss his conclusion about "Gus" Whitehead ?

Can IHS/Jane's -- owner and publisher of Jane's All The World's Aircraft -- reasonably continue to maintain a neutral position on Whitehead and the fabrications surrounding him and his story ?

Is it a wise decision for a corporation which states "The IHS team of subject matter experts, analysts, and consultants offer the actionable intelligence you need to make informed decisions." to take a neutral position on the question of who was first to make a powered, controlled, sustained flight in a heavier-than-air machine ?

That first powered, controlled human flight in a heavier-than-air machine was, after all, the hallmark beginning of the modern age - can the responsible group of analysts and experts and consultants at IHS/Jane's be content to be neutral on such a topic ?

One wonders, what is the use of having analysts and subject matter experts and consultants if the end result is 'We don't know, we can't say, we're not certain...'