David Mitchell is the acclaimed author of six novels, including The Thousand Autumns of Jacob de Zoet and Black Swan Green. His books Cloud Atlas and number9dream were both shortlisted for the Man Booker Prize. Mitchell's latest novel, The Bone Clocks, is an ambitious, genre-confounding epic centering on an otherworldly war between two factions of immortals -- and the unwitting mortals whose fates may be determined by their struggle.

Your books frequently include certain recurring characters. Dr. Marinus in The Thousand Autumns of Jacob de Zoet becomes a major player in The Bone Clocks. Are you building a cohesive fictional world in these novels that we’re glimpsing throughout them, or are these just fun little clues for readers who come back to your books?
It started off with the latter, but it’s turned into the former. Yes, guilty as charged, I’m building a coherent, megalomaniac's, large-scale world of an uber-novel, where characters cross the ... they have their exits and their entrances between my books, yeah.

Do you ever find that trying to create a more cohesive world in this way between the novels creates difficulties for you when you’re working on an individual project?
I don’t know yet, cause I’ve only really started doing it for the last one or two books. It happened in a smaller way before, but it was less conscious or less ... in accordance with a grander design. Problems it might cause -- I’m not sure! What problems do you think it might cause?

Well that’s interesting! [Laughs] I think if you’re interested in going in a certain direction, but you feel bound to stick to a larger vision that you’ve had, it might make you feel straitjacketed in that way. But if you don’t feel that’s a concern that you have, then I guess it wouldn’t be a problem!
I kind of know what you’re getting at. [Laughs] The first principle is that the book needs to be a standalone entity in its own light. I don’t want them to be so interwoven that they turn into sequels and prequels. That won't happen.

And if I feel a conflict of interest between a larger world and the smaller world of an individual novel, then my constitution of the uber-book says that the smaller state -- the book -- has the last say in what goes on in it, and the kind of central government of the uber-novel -- it's Washington -- if you like, is less important than the state capitals, has less power.

Are you planning to continue, with your next project, to dip into this same world that you’re working on?
Yeah, yeah. I’m just doing a very short project, but it’ll wind up in the year 2015, and Marinus, in the incarnation that she’s in in The Bone Clocks, will appear in the last stage of that.

And then in one afterwards, it’s going to be set in the late ‘60s, and I’ve already got one or two people who will be occupying that, including Crispin Hershey’s father. And I might have a 2-year-old Crispin Hershey running around, maybe playing with guns, and being told off by his mum for being too interested in guns, which of course if you’ve read The Bone Clocks would be quite ironic, given how he meets his Maker.

So, you have this very well planned out to all fit together already.
Not that well planned, but these sort of small molecules of ideas are ones that will certainly be in the book and I would hope to build up into scenes.

I’m very intrigued to see how that will work out! The Bone Clocks is very similar to Cloud Atlas in that you tell the story using a variety of narrators, settings, time periods, which a lot of authors don’t take on. Do you know why you’re drawn to this more fragmentary approach to storytelling?
Because I’m a sucker for punishment? Because I’m a masochist? Because ... why? Why are you drawn to the ideas that you’re drawn to? They just sort of smell good, don’t they? Don’t they?

Because I’m me, because I am hungry to try to put apparently incompatible elements into the same novel, and if you want to put both the war in Iraq in the first decade of this century and the murderous feud between two circles of shadow immortals and those first two sections -- the Holly Sykes narrative and the Hugo Lamb narrative, and then have them meet, that’s sort of a two-parter in a way -- and have something about the future, as our oil-addicted civilization has to go through cold-turkey through lack of oil, then you’re going to have an odd, fragmentary, strange, episodic novel. There’s no other way to do it.

But it’s my imagined novel, before I start work on it, that dictates the structure and the nature of the beast, rather than the other way around. It’s not that I think “Ah! I feel like writing an episodic fragmentary novel today, or over the next four years.” It’s that I want to write a book that’s got all these things in it, and the only way to get that done is a somewhat unconventional novel.

I mean, I always envy writers who kind of are content with the one relatively catchable, containable theme with a relatively short narrative arc with a relatively small cast of characters. I would like to do that. In a sense I do do that, it’s just I do it six times per novel, all over again, which is not a time-efficient way of writing novels, believe me. But it’s a big commitment to write a book, and you neglect all sorts of areas of your life including your family, so you’d better want to do it, you’d better really want to do it, and it’s only books like this that I really want to do. So, here they come.

This might not always be true, and part of me hopes that it isn’t. Well, my next book will be quite short, so at least that’ll be ...

A nice break.
Yeah. It’ll be a rest from an episodic, polyphonic head-mangler.

The Bone Clocks does have this dual focus between the fantasy adventure and also global warming and the war in Iraq, these real-world crises. Is there a reason that you wanted to approach these simultaneously? Do you feel like that’s just curiosity on your part to approach them in one novel or did you feel like they spoke to each other in a special way?
Curiosity sounds good. Matter and anti-matter in a way. The moment you’ve got fantasy and a novel that is also asking you to take seriously what you want to say about a conflict in which many tens of thousands of real lives were lost and more lives were therefore smashed and shattered and which is still continuing into this week’s newspapers in the form of ISIS, then it’s tough to do that. But it has been done a few times in the history of the novel. You’ve got a book like The Master and Margarita by Mikhail Bulgakov -- which is one of my favorite books by anyone ever -- about real hardcore Stalinist Moscow, in which we’ve got a talking cat, which is the Mephistophelean familiar of the Devil, who arrives in Moscow. And it’s a superb book. And he does it, so I wanted to see if I could sort of handle those two mutually inflammable materials, political reality and fantasy. The director of that film "Pan’s Labyrinth" [Guillermo del Toro] succeeded with that as well, that worked really well I thought. So, back to your word really: curiosity.

Are there any other authors that you feel have influenced the way that you approach fantasy and at the same time influenced the more traditional adult literary fiction aspect of your work?
Fantasy influences, most consciously Ursula Le Guin and Neil Gaiman. More realist influences, well, anything that’s good, really. I mean, can’t read the Russian novelists and not be impressed, and if you’re impressed by someone then you are impressed because a part of you wishes to emulate them. I love Chekhov; I love Conrad. Don DeLillo’s great. This is a conversation to be enjoyed over drinks throughout the course of an evening really.

What you were reading when you worked on The Bone Clocks? What you tend to read when you work on a book?
Whatever’s on my guilt pile, or things I think I can use. Books by friends who have read mine. There’s not much order here, it’s pretty chaotic. Notable things for the last four years, really you’re asking. Independent People by Halldór Laxness, the Icelandic writer; that’s an amazing novel, big as well, and moves through time. Watched “The Wire” during that time, which is a narratological treat, and a master class, the way it keeps different plots spinning all at once, without dropping them. “Game of Thrones” does the same. The world in decline stuff. British dystopian science fiction from the 1950s, John Wyndham and John Christopher, two quite prescient writers. And 100 to 200 other books that do not come when summoned.

In The Bone Clocks there are a lot of repurposed words or neologisms, such as Horologists and psychosoterica. Which of these words that you find in your books is your favorite and why?
Psychovoltage is pleasing. All one word. It’s distinct, it sticks to the eyeball, and its meaning is absolutely clear. 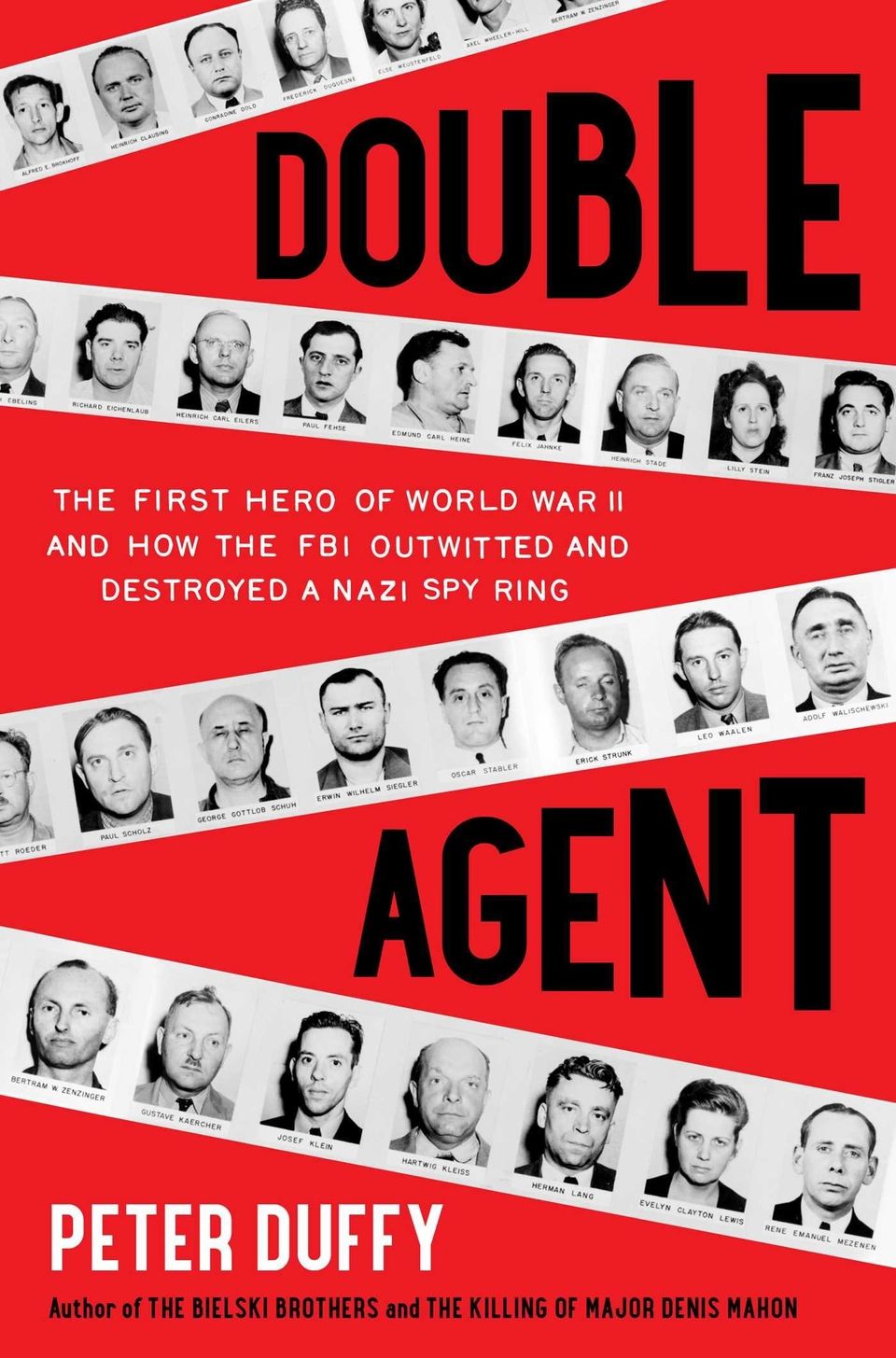 1 / 9
'DOUBLE AGENT: THE FIRST HERO OF WORLD WAR II AND HOW THE FBI OUTWITTED AND DESTROYED A NAZI SPY RING' by Peter Duffy
"An entertaining work duly informed by Duffy's knowledge of both the war and New York City." A sympathetic portrait of a reluctant, little-known German-American double agent on the eve of World War II. <a href="https://www.kirkusreviews.com/book-reviews/peter-duffy/double-agent-first-hero/" target="_blank">Read full book review ></a>