Doing between three to five stories a day can make a weird news journalist feel like a zombie.

Unless you're an actual zombie, that is.

In order to see how the other non-living half lives, I recently volunteered to be a member of the undead at the Haunted Trail, a San Diego-based spook attraction that pops up every October at Balboa Park.

"We can put you to work once you sign these waivers," said Trail owner Greg DeFatta. Little did he realize that legal documents scare me more than most horror films.

Once I signed my life away, I was sent to a trailer with a whole bunch of costumes, all of which were ripped-up, torn-to-shreds and in various stages of decay.

"No designer stuff?" I wondered. I put on what was left of a gray shirt and walked, no, shambled, to the makeup room.

"Can you make me look really ugly?" I asked. The very polite makeup guy gave me a look that suggested all I needed to be unattractive was a little accentuation. 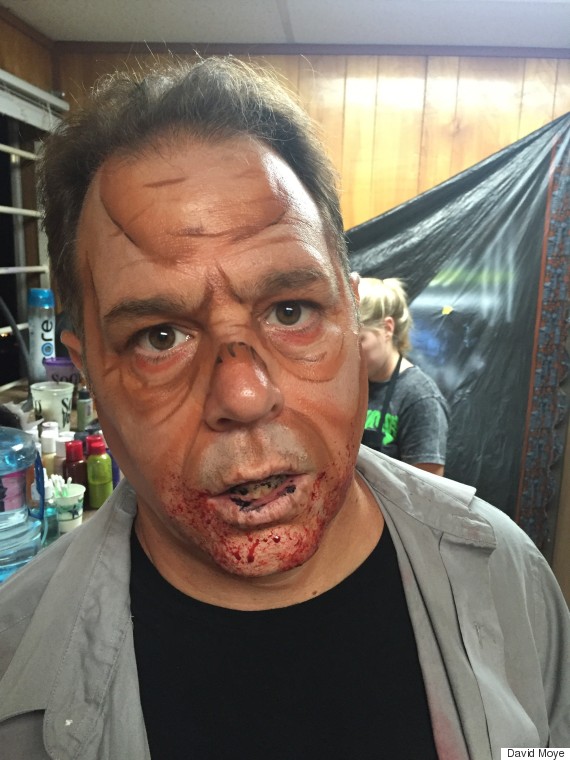 As he painted my face into a jaundiced tint, and put ugly, blood-covered goo on my already-plaque-covered teeth, I debated whether I should wear glasses during my spooky stint.

"Right in front of you. Maybe you should wear them."

Although I've never seen a zombie wear prescription eyewear on The Walking Dead, I decided safety first was the best for me.

However, I decided not to let myself be photographed with the glasses. Too humiliating.

"You're in the graveyard tonight," DeFatta said, walking me down a meandering trail past a school bus filled with creepy clowns.

Once I got there, there were a few zombies already there waiting to help me in the finer points of shock and awful.

It might seem as if zombies are out for themselves, but haunted house zombies have to work as a team.

"One of us sets up an initial scare that may or may not work, but that sets up the second scare," is how the de facto head zombie, Michele Brindle, explained it to me.

Alan, another zombie, was excited about hiding in the giant cross in the graveyard.

"This is the best job I've ever had," he said, sounding happier than you'd think a member of the undead would sound.

I set myself up in the crypt. The entrance was covered with a cloth so I figured I could hide at the entrance and freak out whoever entered with a scream.

Meanwhile, I decided the best way to get into character was to go method and come up with a back story.

There is an old acting rule: An actor playing a villain should never believe his character is evil. Instead, create motivations for the evil behavior. So I came up with a back story.

I decided I was Bob, an average working class zombie who doesn't want to be dead, but is working hard until something better comes along. To add depth to the character, I decided that he hailed from Florida. It was a tip of the hat to my day job as a writer of weird news since the Sunshine State is still America's weirdest.

Michele set herself up at the front of the graveyard, Alan hid himself in the cross and I was in the crypt.

How did I scare? Honestly, I probably had a 33 percent freakout rate at first. I had a couple of people scared, especially when I banged on the metal while screaming. Others just ignored me, to which I made the rookie mistake of screaming louder.

After about 30 minutes, my voice was shot, so I had to change my approach and be the silent but creepy type.

I'd get extra close to people and hiss, "Welcome hooooome!" That freaked out some people. A couple of people just laughed, but my lameness just set them up for a big scare when Alan jumped out of the cross.

It was early in the season, so there were breaks between groups. That's when Michele offered tips in advance reconnaissance.

"See those two couples heading into the creepy school bus? The guy trailing behind is trying to look cool, but he's easily scared," she said. "The girls will be easy."

Michele knew her stuff. Those people were putty, especially when another zombie, Monique, jumped out from behind a grave.

Like me, it was her first night on the job, but based on what she told me about her audition, she's a natural.

Trust me, it was creepy when she did it.

"You should try getting in the cross," said Alan. "That is, if you're not claustrophobic."

"Well, you have to wait until the mechanical coffin opens here on the left. Otherwise, it doesn't work right," he offered.

OK. So I hid in the coffin and I waited. And waited and waited. I heard some people come and I jumped out!

It was one of the other zombies bringing me a bottle of water.

"Were you scared?" I asked.

I got back in the cross and I waited. And waited and waited.

"Someone's coming!" I heard one of the other zombies say.

I wait until they're out of the crypt. I wait until I hear the screams from the mechanically operated coffin next to me.

Then I jump out! It's a dad and his son and they freak out, especially the boy. They run to the next haunt screaming; screams that turn to laughter.

With that, I feel my work as a volunteer middle-aged zombie is done and walk back to the trailer to hang up my zombie apparel.

"You can wash off your makeup if you'd like," DeFatta says.