Earlier today, the New Yorker released its cover for the July 21, 2008 issue — and the reaction was swift and furious.

The cover by Barry Blitt, called "The Politics of Fear," shows Michelle and Barack Obama depicted as the worst of the prejudiced, smearing characterizations that have dogged them over the course of the campaign: Michelle Obama as a revolutionary in military fatigues, packing AK-47 and ammo; her husband dressed like the Muslim he is stubbornly accused of being. Both of them stand in the Oval Office, with a portrait of Osama bin Laden behind them over a fireplace, in which an American flag burns. Not very subtle.

Some are not alarmed — Clarence Page, longtime Chicago Tribune columnist (and African-American) said the cover was "quite within the normal bounds of journalism" — but not everyone sees it that way. It's been described as "offensive" and "trash" and "disgusting" and "just as bad as Fox News."

Why would the New Yorker publish such a thing? Why would they run a cover that could have run, irony-free, on the cover of the National Review? What were they thinking? We put these questions and more to David Remnick, the editor of the New Yorker. His answers are below.


This cover has quickly become very controversial. The Obama campaign has called it "tasteless and offensive." Why did you run it?

Obviously I wouldn't have run a cover just to get attention — I ran the cover because I thought it had something to say. What I think it does is hold up a mirror to the prejudice and dark imaginings about Barack Obama's — both Obamas' — past, and their politics. I can't speak for anyone else's interpretations, all I can say is that it combines a number of images that have been propagated, not by everyone on the right but by some, about Obama's supposed "lack of patriotism" or his being "soft on terrorism" or the idiotic notion that somehow Michelle Obama is the second coming of the Weathermen or most violent Black Panthers. That somehow all this is going to come to the Oval Office. 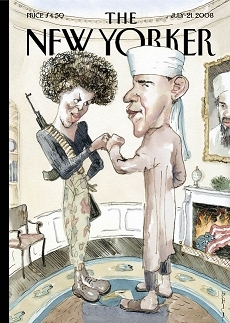 The idea that we would publish a cover saying these things literally, I think, is just not in the vocabulary of what we do and who we are... We've run many many satirical political covers. Ask the Bush administration how many.

Many Obama supporters have started to voice their anger over the cartoon, which they say does not so much lampoon the smear as perpetuate it.

Normally I'd want the work to speak for itself — normally I'd not want to explain jokes, or short stories, or a piece of non-fiction that we publish — people always read things the way they're going to read them. In this case, since I see that it's stirred the pot somewhat, and some people have misinterpreted it very quickly, I'm talking to you. The image tries to be as clear a possible the title tries to make sure of that. (Ed. The title does not appear on the cover, but is listed in the Table of Contents, in the magazine and online.)

Prior to greenlighting the cover, did you consider that it might be co-opted by Obama opponents as anti-Obama propaganda? If so, did that possibility give you pause?

It always occurs to you that things will be misinterpreted or taken out of context — that's not unusual. But I think that's the case of all political satire, whether it's Art Spiegelman or Thomas Nast or Herb Block or Jon Stewart. I bet there are people who watch Stephen Colbert and think he's a conservative commentator, or maybe they did at first....a lot of people when they first saw Colbert said, "What is this? " What he was doing was turning things on [their] head.

I wrote this up just a few hours ago, and there are already close to 800 comments on my post. Quite a few of them are from people who say they no longer plan to buy the New Yorker and/or have thrown out their subscription cards. Do you have anything to say to those readers?

It's not the first time. I respect people's reactions — I'm just trying to as calmly and as clearly as possible talk about what this image means and what it was intended to mean and what I think most people will see — when they think it through — that it means. The fact is, it's not a satire about Obama - it's a satire about the distortions and misconceptions and prejudices about Obama.

A number of commenters also wondered if there was a cover in the offing that would depict McCain unflatteringly - do you have any policy or general customs regarding the even treatment of candidates in terms of coverage, and covers?

Oh, we get around to everybody I hope.

A few months ago, Rolling Stone ran a cover depicting Obama very flatteringly, with a halo-ish aura around him (see here). Recently the magazine followed up with another flattering cover (here). This week, Newsweek's cover depicts Obama praying. Do you think there is a double standard here about covers that are perceived to be 'flattering' vs. 'unflattering'?

We have a very different vocabulary for what we do. Our covers are very, very often freestanding, in that they are not exactly tuned to a story inside. This cover is not a sketch of Obama campaigning in Chicago in the mid-90s. Most weeks it's not a political satire at all — most weeks its a beautiful cityscape or seasonal image or - well, you know the magazine. Rolling Stone's a different magazine — their covers tend to be tied to a story — one of these [covers] was an out-and-out endorsement, if I'm not mistaken.

Right. The cover line read "A New Hope," and was explicitly labeled an endorsement.

About five weeks ago we were about two hours from running a cover of Obama in a Brooklyn Dodger's uniform, sliding into home. And his number was #42. And anyone with even a little bit of knowledge of baseball history knows this is Jackie Robinson. So this was kind of a turn on Obama being the Jackie

Robinson of American politics - in a way - and no doubt people on the Obama campaign would not have found it offensive — they would have immediately understood what we were trying to say, that Obama had jumped an enormous historical barrier.

We have now published three very long, extensive Profiles of Barack Obama and any number of Comment pieces, and I think it adds up to detailed, fair, insightful coverage. This cover is part of the picture, too, but it uses the language of political satire and cartooning, not of reporting and essays, and sometimes not everyone likes that or gets what's intended. I would prefer not to over-explain things, but I'd rather be clear than there be lingering misconceptions about what Barry Blitt was exploring.