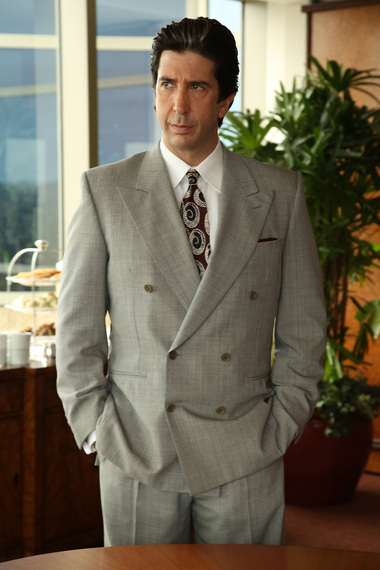 He's best known for one of the most popular sitcoms of all time, Friends, but by his own admission, there was a time when David Schwimmer feared he would never be able to come out of the millstone of being known for that role. If he hadn't done so before, Schwimmer proves he's more than just Ross, in his riveting role as O.J. Simpson's best friend and attorney, Robert Kardashian.

I had an opportunity to talk with Schwimmer about shooting The People v. O.J. Simpson: American Crime Story, an FX limited series, based on the book The Run of His Life: The People v. O.J. Simpson by Jeffrey Toobin. We also discussed his work in the theater, his new television series, his early fight to increase diversity on his beloved sitcom and why diversity was a vital factor in him signing on to do this limited series.

Do you believe that Robert Kardashian really believed in his heart of hearts that O.J. was innocent?
You know, the way we talked about it and tried to dramatize, as you'll see particularly in episodes seven and eight, there's a change that begins to happen, a kind of crack in his faith. The way the character was presented to me, and in the research I did in talking to Kris Jenner, I learned that he was a man of great faith and had a very real personal relationship to God, and I think that informed all the decisions he made. My take on it was that he felt it was not for him to judge. He wanted to be there to support his friend who was going through this terrible ordeal and the pain he was in. Don't forget, in the first few days his friend wanted to kill himself, and O.J. tried to, in Robert's house; he had a gun to his head. I think Robert just wanted to save him and to be there for him and help him through his suffering. I think the issue of his guilt or innocence, sure, it plagued Robert as the trial went on, but I think at first, it wasn't even something he was that concerned about, as much as just wanting to save O.J.'s life and make sure he was okay. This was all my interpretation, of course, and the writers'; this is all speculation. I think what did begin to happen - what we chose to have happen - was that as more and more evidence came to light, and as the cumulative effect of many, many hundreds of moments and exchanges and conversations and days in court, something did begin to shift in Robert. We talked about him having this crisis of faith - and faith in O.J. and faith in his own friendship with him. He ends up, at the end of the trial and after the verdict, a very different person and a changed man and a changed relationship to his friend.

What did you do to prepare for this role?
Well, luckily, there's quite a bit of material available. There's a wealth, one could say an overabundance, of material - books to read, articles to read, videos to watch, tape of the trial - there's so much. I just basically buckled down and started to immerse myself in everything that I could. One of the greatest things I was able to do was have a conversation with Kris Jenner on the phone for a couple of hours. And that was huge because she was able to communicate who Robert was on a very personal level as a father and as a husband, what his character was like, and that was something that I couldn't really figure out via the the archival videos, and the interviews he gave. So, that was really valuable to learn that he was a man of great faith, had a very personal relationship to God, prayed every day, at every meal and before big meetings, and that he was a family man. He lived for time as a family - dinners and trips and school events, everything. The highlight of his life was having his entire family and Kris around him, and his parents, and big meals and just good times; that's what he lived for.

We, of course, know you best for your role in Friends. Were you worried that you'd be typecast in that role for all eternity and not get an opportunity to play a role like this?
I think the first many years of the show, while we were filming, that was a fear of mine, but I eventually just came to terms with it after talking to other actors who were best known for one particular role on a TV show. I just realized that, you know, I'll play the long game. I think in time hopefully I'll be able to play characters that will allow audiences to see me as another person, and hopefully I'll be able to convince some people that I'm an actor and not just that one character.

What are some of the roles that you're looking for now?
I just signed on to a new 1-hour drama for AMC. It's called Feed the Beast. Clyde Phillips, who was the showrunner on Dexter and Nurse Jackie, is the showrunner on this show. It's about a guy who's passion is to be a sommelier, but he's dealing with the loss of his wife in a tragic accident two years prior to the show starting, and he's raising a 10-year-old son. He's trying to put his life back together given the grief that he's still living through. It's a great script, a great role. His buddy in crime is played by Jim Sturgess. The character he plays is Dion, who is a really talented chef. Over the course of the first year, they're trying to get back on their feet, put their lives back together and open a restaurant.

It's said that you took a very active role in creating opportunities for actors of color on the set of your sitcom. First of all, is that true? Second of all, what are your thoughts on the conversation right now that is going on about diversity?
It is true. I was really fighting for the opportunity to have the character of Ross have an African American girlfriend for quite a while, and it finally happened and I was really happy about that. Aisha Tyler - was on the show for many episodes and was terrific. It's a function of how I was raised and my parents, who are very active and very progressive, and the schools that they chose to send my sister and I and how we were raised, it's just something that has always been really important to me. In fact, I'm with this theater company in Chicago, and the play that we chose to open our new theater 10 years ago in Chicago was an adaptation I did of Studs Terkel's book Race, which was specifically about how blacks and whites think and feel. It was about race in Chicago, and it was something we developed over a period of three years. We work-shopped the book, and I cast a large cast of different generations of African-American, white, Asian and Latino actors, and we really hashed it out for two years before we put the production on. And we worked with Studs Terkel on the script the entire time. So it's just something that's been important to me, and that's frankly one of the reasons I signed up to do the O.J. show. I felt, when I read it, that it was an opportunity to contribute to the conversation we're having right now in this country - a vital conversation that, sadly, questions whether things have improved at all in the 20 years since the O.J. trial.