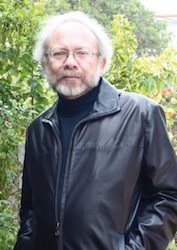 It's National Poetry Month and to celebrate I caught up with poet, David St. John. Here are a couple of things to know about David (hereafter called DSJ):

His latest book The Auroras just came out and it's already in its second printing.

When you call his cell phone, a polite voice tells you to please enjoy the music while your party is reached. Then, Dylan's Like a Rolling Stone comes on and, if you had any doubts, you're now certain you've dialed the right number.

He doesn't have a website. If you look him up at the Academy of American Poets website, part of his URL is dstjo which is kind of a cool extension of DSJ.

He is director of the Ph.D. Program in Literature and Creative Writing at USC. Former Poet Laureate Robert Hass once wrote of DSJ that his work is "made out of sentences." Click here for more of that review and some context on the gorgeousness that is his work. David is one of the most knowledgeable and generous teachers around. I should know. I've studied with him at workshops for the past six years.

We spoke recently about The Auroras, poetry, music, 9/11, the movement of the mind and lightning. I want to start off with something that came out near the end of our conversation. Not everyone is an avid poetry reader. Some people say they don't like poetry. Others claim it's too hard, too much work. But most of us have turned to poetry at some point in our lives. Maybe the end of a relationship triggers an outpouring of words and images. Or maybe there's a poem we distantly, vaguely recall that suddenly becomes very important. Here's DSJ's experience with that:

"A couple times a year I get a call from someone and they're trying to find a particular poem. Usually it's a poem they've read in high school. They remember sort of what the poem is about and one or two details, but they can't find it. They call the university, they're routed to me and usually I can help them find the poem because anthologies tend to repeat themselves so I know what poems they might have read. This has happened to me for 30 years of teaching.

I began to ask people, "Why are you looking for this poem?" And the answer's always the same -- that they've recently lost someone close to them. The poem doesn't necessarily have anything to do with death. But they have this sense that if they can find it and again read this poem that had unlocked emotion in them, then they will also be able to find language for what is an unbearable and unspeakable grief."

I was going to talk here about loss, memory and DSJ's book. But instead, I'm going to confess that what I really want is to make you love poetry. I want you to see that poetry can do really special things -- without tricks or fireworks or a big budget. Here's a good poetry story that DSJ told me:

"The day after 9/11 I was talking to Phil Levine [U.S. Poet Laureate] in NY and he had taught that afternoon at NYU. He had held his class. I had held my class at USC--3,000 miles away. I said, "Yeah, I read ... I didn't know what to do so I read Zbigniew Herbert's "At the Gate of the Valley" and Tadeusz Rozewicz's poem "In the Middle of Life"." Two post-war Polish poets who are so central to the idea that we necessarily -- after the Holocaust -- need to find way to reconstruct the idea of something human and human values.

And there's this long silence and then Phil said, 'I read to my class Zbigniew Herbert's "At the Gate of the Valley" and Rozewicz's "In the Middle of Life."' We had read the identical poems to our classes three thousand miles away. And that's what a great poem will do."

With The Auroras, you're in very good hands. This is DSJ's tenth book of poetry. He's also got a handful of limited editions and chapbooks floating around. There's a book of his prose and interviews entitled, Where the Angels Come Toward Us: Selected Essays, Reviews, and Interviews. Of The Auroras, DSJ had this to say:

"With this book I self-consciously wanted to do something I felt was a departure. I really have always been someone who wants to do something different with each book. I mean certainly you can find things in terms of the aesthetic, very familiar and resonant, but at the same time I wanted to write a book that had these three somewhat distinct sections. I had been working on the title section, The Auroras, which is the last section in the book for a long time. I knew that was really going to be the most demanding section for a reader. And yet I wanted, in the first section, to honor two things in my own realm of artistic obsession. Those things were song, ballad, music and also, the influence of surrealism on my work.

The center section was an attempt to write a more stripped down poetry than some of my recent work. I wanted to write poems that had a really fierce immediacy and look back toward my own growing up in the San Joaquin Valley. So that turned out to be a powerful thing for me to be able to do that, to be able to go back to that. It made a lot of sense to me to have these three sections. I think of them as a kind of triptych in the book. Usually in a conventional triptych, it's the center panel that is the most prominent. But in this case, it's really the final panel with the whole section highly inflected with and infected by a whole notion of mortality. Philosophically and even spiritually how individuals deal with death, not just the speaker but other people in the sequence as well."

But to lift us out of the discursive and into the poetic, here are a couple of lines from the poem, "Gypsy Davy's Flute of Rain."

I learned my job was to play just a little tune

This is what DSJ offers us in The Auroras. Pick up a copy. Read and let the poems unfold. Then they will "yield... in the way other people yield to us. Sometimes it takes several encounters with a particular individual before we really have a deeper sense of who they might be." Read the poems out loud. This is another piece of DSJ advice. Read aloud and hear the music of the piece. Just see where this takes you.

You can find more of my conversation with DSJ at www.betweenparents.org. There we'll pick up with the bits about his love of music, lightning, the mind and who's looking over his shoulder.

I'm a writer based in LA