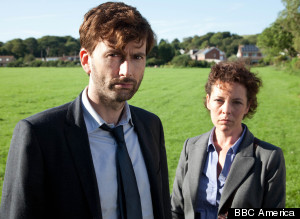 Both "Broadchurch" and "Low Winter Sun" tell crime stories set in striking locations, but only one of the new shows premiering this week manages to be both distinctive and necessary.

The outstanding "Broadchurch" (10 p.m. EDT Wednesday, BBC America), which stars David Tennant in his best post-"Doctor Who" role, is part of a wave of good-to-terrific new shows dwelling on the thorniest and most difficult consequences of crime and punishment.

Shows as varied as "The Fall," "Rectify," "The Bridge," "Hannibal," "Orange Is the New Black" and "Top of the Lake" have examined the effects of violence and transgression on criminals, victims and those who enforce society's rules. Like those programs, "Broadchurch" manages to be both a finely crafted piece of suspenseful entertainment and also an emotionally resonant examination of grief, loss and moral confusion. With a light but sure hand, "Broadchurch" carefully doles out pieces of information about an awful crime that shatters a community, and on one level -- like many of the shows listed above -- it's simply an effective whodunnit. Thanks in part to terrific performances by Tennant and a fine supporting cast that includes Arthur Darvill ("Doctor Who") and David Bradley ("Game of Thrones"), it becomes much more.

It's appropriate that "Broadchurch" is set at the seaside; an effective undertow builds slowly but surely over the drama's eight hours, and, as is the case with most good crime stories, even as the mystery builds, ultimately "why" begins to matter more than "who." Creator Chris Chibnall has done an exceptional job of depicting the ways in which one awful act can ripple outward through an entire community and destabilize families, marriages and friendships, not to mention an entire town's self-image. Detective Sergeant Ellie Miller (the excellent Olivia Colman), a resident of the picturesque beach town of Broadchurch, starts out believing that the murder of 11-year-old Danny Latimer was an aberration. But as the drama gains momentum, her face shows that she no longer knows what to believe about the people she has known her entire life.

Of course, if those people didn't seem specific, textured and substantial, none of the knotty questions about the town and its residents would matter much, and it's in those arenas that "Low Winter Sun" (10 p.m. EDT Sunday, AMC) disappoints. The drama, which is an adaptation of a U.K. series of the same name, tries way too hard to be a Serious Cable Drama. The strain almost turns it into a parody of the genre.

Mark Strong, who played the main role in the U.K. miniseries, also plays the lead in the U.S. version, and he and co-star Lennie James turn in their usual capable performances. But the show ends up being a labored, uninspired compilation of cop-show cliches: bodies on morgue slabs, charged dialogue between mismatched partners and sketchy characters who are trying to get away with something. Those same elements feel subtle and fresh on "Broadchurch," but on "Low Winter Sun," despite the presences of fine actors like James Ransone ("The Wire") and David Costabile ("Breaking Bad"), many scenes come off as overwritten and stiff.

Any TV show that invokes the idea of cop-on-cop violence, as "Low Winter Sun" does in its opening minutes, has to contend with the taut legacy of "The Shield," a genuinely entertaining cop show that intelligently explored many different flavors of compromise and morality. "Low Winter Sun," on the other hand, is never quite free of the sound of clanking plot machinery; though a series of dilemmas are efficiently set up in the first two episodes, it's difficult to care about the pressures on various characters, given how generic they are and how predictable and overwrought the whole enterprise feels. My favorite aspect of the show was its earnest and welcome depiction of Detroit's Muslim community, though it has some ways to go to equal the complicated take on Juarez and the border region in "The Bridge."

"Broadchurch" features less overt exposition about its lead characters and their hometown, and it's more effective for it. There are intimations that Detective Alec Hardy's (Tennant) last big case went badly, but the character's past is mainly conveyed by his haunted eyes and flat affect, at least in the first half of the season. During his run as the lead in "Doctor Who," we saw time and again how well he handled the Doctor's darker moments, and in "Broadchurch," he's extremely convincing as a prickly man who has lost his moorings.

It's easy to see why Fox announced it's remaking "Broadchurch": The part will be catnip to actors who want their shot at playing a grizzled, cynical cop. It's to Tennant's great credit that Hardy, a wary outsider in the close-knit community, never comes off as a cliche, but as a man whose gruff exterior hides a great deal of regret and even terror of getting it wrong again.

There's been a lot of talk this year about how big-budget movies have essentially gotten into the desensitization business, and are too concerned with broad, ever-escalating stories that inevitably involve the end of the world. The glory of television is that it can get small and specific, but small is not insignificant. To a parent, to a town, the death of one child is the end of the world.

Many of the shows I've mentioned here are, aesthetically speaking, filled with silence and space -- space that allows fear, loss and grief to vibrate. I think a lot about the scene in which a released prisoner stared at a wall of shoes at Walmart in "Rectify," a horrifying fall amid gorgeous scenery in "Top of the Lake," and the way the camera hovered over a little girl's bedroom in "The Fall." I can't explain why, but that gentle shot never let you forget that a serial killer slept in the room next door.

Even in more chipper, mainstream entertainments, violence just becomes noise if its aftereffects never have time to land. Perhaps we have "Breaking Bad" to thank for the spacious yet specific landscapes of this new wave of shows, which dutifully try to supply a kind of closure without didactically chasing after answers. We'll never know why certain people, in certain situations, can't resist their worst impulses. Thanks to these shows, including "Broadchurch," we do find out exactly how those choices ultimately affect all kinds of individuals in these communities. The dread is non-specific, but the people and locations are not.

There's a harrowing moment in "Broadchurch" that is handled in a typically delicate fashion: In search of something to do, Danny's grieving mother goes to the grocery store and waves of silent reactions greet her. Are the other shoppers feeling sadness, fear, surprise or contempt? Is it possible to really know? Does it matter?

What does matter is that the moment is alive with mystery and heartbreak. And when the vicar comforted Danny's mom in the parking lot, it was impossible not to feel for both of them.

I also wondered if the vicar was hiding something.

Ryan McGee and I talked about "Broadchurch" and the return of "Breaking Bad" in this week's Talking TV podcast, which can be found here, below and on iTunes. We talked about "Low Winter Sun" (along with "Clear History," "The White Queen" and "Strike Back" on last week's podcast.