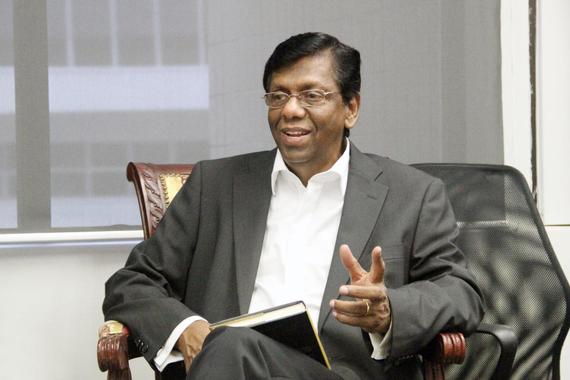 June 1958. Racial riots were blazing through the North of Sri Lanka, annihilating the minority Tamil population. A young boy of 13 years stood witnessing it all. The injustice, the subjugation of the powerless, the bloodshed and the carnage that engulfed a nation, had in turn left an indelible mark on him.

David Gerald Jeyasegaram, who until then was enjoying his childhood amidst cricket fields and church choirs, had suddenly been manned up by the whiplash of time. The horrors of human sufferings had eclipsed the innocence of his adolescence. It was now time for him to set sail with his family to far off Singapore at the insistence of his father so as to save the entire family from the pangs of civil war.

In January 1959, David arrived in Singapore with mixed feelings. He was unable to fathom why and what fuelled the senseless racial riots? Could hatred be so strong so as to wipe out tolerance for fellow sentient beings? He wondered who was protecting the minorities?

Singapore meant a new life and in turn new ways of life. For the first time, David experienced a multicultural, multiracial and multireligious society, peacefully coexisting with each other. It was in Singapore that David observed, as a teenager, that minorities were at par with everybody else.

September 1998, fast forward forty years. As a practising criminal lawyer in the courts of Singapore, David notices the magnitude of injustice that would come down crashing on 172,000 minority shareholders of about 112 Malaysian listed companies, whose shares were arbitrarily frozen by Malaysian authorities.

Over USD 4.47 billion had been locked for reasons best suited only to Malaysia. David knew right away that this was a huge travesty of justice because minority Singaporean shareholders had pumped their entire life's savings into these shares.

There was a sense of helplessness and inability amongst these small investors to resolve the crisis, which became notorious as the CLOB (Central Limit Order Book) saga. There was no end to the public angst and outcry.

Meanwhile, Malaysia authorities were unwilling to negotiate directly with their Singaporean authorities. Singapore was asking for a fair system of staggered release of shares to its minority shareholders. However, Malaysia, insisted that the frozen CLOB shares would only be conditionally released if Singaporean shareholders opened up accounts with the Malaysian Central Depository for trading on the Malaysian exchange.

"It was ridiculous to even think that small investors could negotiate with the Malaysian politicians and authorities directly, as demanded by them, "said David.

"To me, it was sheer bullying of thousands of Davids by a massive Goliath. How could small investors do what Malaysia was asking for without having any experience with Malaysian brokers across the border. I felt they were out to get our dime. What made it even more worrisome was the absence of an organized institution to represent and advance the cause of the stranded minorities. Can you imagine the lifelong savings of hundreds of thousands of small investors locked up by a brutal, inconsiderate power, "adds David.

A courtroom settlement was absolutely out of question due to the huge fees that small investors would have to bear across the causeway in Malaysia and the uncertainty of the outcome. However, Malaysia justified its actions as capital control measures in order to minimize the effect of the 1997 Asian financial crisis.

It probably wasn't a great time for Malaysia either since George Soros had also brought sorrow for the Malaysian currency by dumping it. The stock market had completely collapsed and separately, Malaysia started suspecting that Singaporean investors were dumping their shares in Malaysian companies.

Notwithstanding what the truth might have been, Singapore's small investors were desperately hoping for their investments to be returned. These affected investors had been, for over 30 years, investing in the Malaysian stock market.

It was getting clearer by the day that Malaysia was in dire straits and was desperately looking for a capital injection from somewhere or the other.

There was a stalemate for nine months with no one coming forward to give the small investors a hand. Understandably, the issue was tinged with politics. With two governments and their top negotiators unable to agree, small investors had started giving up hope.

Come 1999, seeing the helplessness of small investors, the unwillingness of Malaysian authorities to settle with their Singaporean counterparts and fearing a long stalemate to the detriment of the investors, David decided to jump in the fray and fight for justice.

Despite knowing fully well that the odds were stacked against him and that he was just an ordinary man, he nevertheless set up an NGO known as Securities Investors' Association Singapore (SIAS) to fight for the underdogs and protect minority shareholders rights by providing a strong and unanimous voice.

"I was trained never to fear taking up cudgels if the cause was worthy enough by one of Asia's outstanding criminal lawyers and Singapore's first chief minister, David Marshall."

"I knew no fear or favour and my previous experience as a magistrate and as a prosecutor told me that injustice must not be allowed to thrive and must be challenged at any cost, "added David.

David made numerous attempts to reach the Malaysian authorities directly but to no avail. Taking legal action was out of the question. The only option left for David was to take his fight to the global media.

David canvassed on CNN, CMBC, Bloomberg, BBC and numerous Asian broadcast and print agencies. He told the story of the predicament of the small investors regularly and well.

"All my training in childhood in drama and poetry coupled with my legal experience came handy."

The results were astounding. It started hitting Malaysia in its pockets. Mark Mobius of Templeton Funds threatened to withdraw USD 350 million from Malaysian markets. US based MSCI Index declined to admit Malaysia. Foreign Direct Investments into Malaysia dipped. Singapore investors, who Were the majority investors in the Malaysian economy, also started to withdraw fearing forfeiture. Needless to say the strategy worked," adds David.

"There was no internet, no social media, no messenger services. Only people power and the sad stories of people who were being bankrupted or even committing suicide due to banks calling on them to make good their debts. It was a classic example of human suffering making everybody squirm and stand up against the injustice," adds David Gerald.

"People thought I would not succeed. After all, what was the might of one man versus an undeterred nation, led by a political giant. such as Mahathir Mohamad"

Malaysia was still not relenting and was threatening to forfeit USD 4.47 billion worth shares by December 31 1999, if the small investors did not agree to the settlement of 52 cents per Dollar, proposed through a private company, appointed arbitrarily by Malaysian authorities.

This was also when David was receiving private settlement proposals such as closed end funds at steep discounts and at risk to liquidity. Someone even suggested David join his Malaysian company to settle the issue by being a shareholder and director in his company.

"Needless to say, I showed him the door. Although, many private offers were made for settlement directly to CLOB investors, they chose no to accept and stick with us on this fight, "adds David.

The downing of the Goliath

In January 2000. David and SIAS, which David founded earlier, approached Singapore authorities to consider taking the issue to the World Trade Organization (WTO) to which both Singapore and Malaysia were signatories. Singapore authorities had already been considering that course of action and announced in parliament that they would do so.

Within a week, Malaysian authorities entered into negotiations with with their Singaporean counterparts to settle the CLOB saga through a staggered release of shares, something that David and SIAS had been strongly advocating, right from the start.

"If not for the CLOB saga, organized shareholder activism by the civic society would not have found its roots," says David.

Today, David has led SIAS to become the biggest and the most effective investor lobby group in Asia, with over 71,000 investor members. He is known as''Mr. CLOB'' and one of the most respected mediators in shareholder issues in the emerging markets of Asia. He is setting the bar high for corporate governance standards, accountability and transparency, promoting financial literacy at all levels in Southeast Asia.

Investors from the Philippines have also approached David to help them protect the rights of small investors in their country. They have already set up an investor body in Manila that is modelled after SIAS in Singapore.

"My biggest compliment came from a small investor's child, who said my daddy says you are the David who took on a real life Goliath and won. Today, the small investors' child would have graduated from college and that to me is the real victory of the collective human spirit."

David continues working for the rights of minority shareholders in Asia through SIAS, the NGO he founded. He has a little sticky note on his office table that reads as, 'Without fear or favour'. Those who know him know precisely what it means. Those who don't, find it out the tough way.