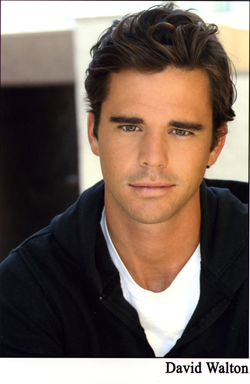 He's tall, dark and handsome and often recognized -- though not by name. David Walton, starring in NBC's new series Perfect Couples, is said to look like Colin Farrell, Ryan Reynolds, Treat Williams, Matt Dillon or a combination of those actors by online chatters. Walton says strangers often approach him and ask, "Are you Dr. Rick?" -- a character he played in the film Fired Up. While the film didn't do well in theatrical release, it has become a cult hit on DVD. He doesn't mind going by Dr. Rick, saying, "I'm not jaded yet. I'm still at the point where if someone comes up to me with great energy I'm happy to meet them."

Perfect Couples debuts on January 20's Thursday Night Comedy Juggernaut -- sandwiched in between Community and The Office. A breathtaking place to be, especially for an actor whose four previous series never lasted beyond six episodes. "I hope people watch the show and go, wow, that was really cool and different and I want to keep watching this," says David Walton. "The show is about three couples optimistic about their chances to succeed at marriage. It confuses the gender roles really well. Guys talk about their feelings, the girls have full-time jobs, the guys are raising the kids."

Walton's character, Vance, is "completely out of his mind," according to the actor. "I like to think everyone is pretty weird but they don't show it. Vance shows it; he has no filter." The character is quirky and funny and memorable, sparking the hope that strangers will begin calling Walton "Vance" instead of "Dr. Rick."

Either way, he is just happy to be a working actor. David Walton was born in Brookline, MA into a family of seven children and attended Dexter School, which bills itself as "a classical education for boys." Walton describes it as "a very strict non-artistic school which JFK attended." It wasn't easy to have artsy aspirations there, but Walton succeeded. "From the age of 4 or 5, I loved to make people laugh. At Dexter, I would dream about starring in Lord of the Flies."

It was at boarding school in New Hampshire and then Brown University where Walton finally got to flex his acting muscles. He even gave up rowing in order to devote himself more fully to acting. "Being on stage was all about the palpable energy of a rapt audience hopefully buying into a life onstage. The immediate connection with the audience was the best part for me," he recalls. "The camera is not as fun but your work is preserved forever. There's immortality to it."

Much in Walton's life is new and exciting at the moment. On March 18, he will marry Venezuelan-born actress/singer Majandra Delfino in Miami, and he is eagerly looking forward to it. He recalls a trip the two took to Barcelona recently: "My fiancée is half Venezuelan and half Cuban so she speaks Spanish and we had three of the most magical days of my life." While the first 13 episodes of Perfect Couples are already in the can, it is clear that his upcoming real-life marriage may influence his character's marriage in subtle ways in future seasons. David Walton knows as well as anyone how intrinsically linked life and art are.