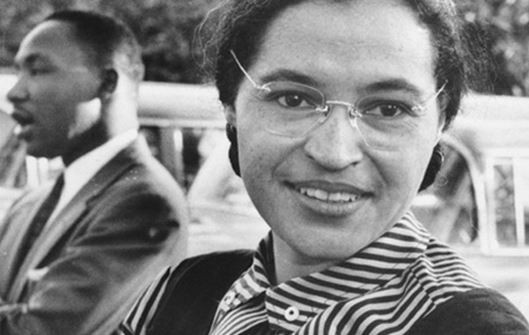 References and comparisons of Kim Davis to Rosa Parks and other iconic Civil Rights Movement leaders are not only offensive, they're misplaced.

Firstly, Davis, the Kentucky clerk who was jailed for refusing to issue marriage licenses to same-sex couples, is fighting for exclusion rather than inclusion. Davis is selectively reading and interpreting Bible passages in order to strengthen her beliefs about the validity of excluding and discriminating against an entire class of individuals. Parks, King and their peers in the Movement fought to include others. They fought to protect and guarantee civil rights, to rightfully instate rights--not take them away. It's simply preposterous to liken a process that facilitates a wedding license to a process that once facilitated slavery.

As an elected official, Davis took an oath to uphold the law--not to interpret it based on her own beliefs. If each of us was allowed to make a personal choice about which laws to follow and which to ignore, there would be total anarchy. The United States is a nation of laws; everyone, particularly someone in elected office, is expected to follow the laws even if they don't fit our individual choice or belief systems. If Davis is so strongly convicted, she should step down from her job and allow someone willing to uphold the law and recognize the Supreme Court's ruling to serve. She is working outside of rather than with within the U.S. legal system. And that is yet another way that she differs from our Civil Rights heroes: she is not effectively using the system to bring about change.

It's ironic that Davis is citing Christian scripture when her actions are antithetical to Christian kindness, forgiveness and acceptance. She contends that homosexuality is a sin and thus she cannot support same-sex marriage. However, if sin is truly the issue that prevents her from handing out marriage licenses to LGBTQ couples, she should withhold licenses to any and everyone with any trace of sin in their lives. Fornicators, liars, gossips, self-righteous, judgmental people, fearful and prideful individuals, divorcees and non-Christian believers should all be denied marriage licenses. In fact, anyone in violation of the 613 Old Testament commandments given through Moses should not be allowed to get married, according to Davis' standard for denying equal rights.

She, along with many Christians, has created a sin hierarchy, deeming one sin worse than another. Yet most Biblical scholars agree: if a person commits one sin, he or she is guilty of breaking the entire Old Testament Law. Davis might as well be homosexual because she is guilty of sin by operating outside of the commandment of love. Moreover, under her Draconian and distorted reading of the Bible, she should have denied herself the right to a marriage license since she divorced not one, but three husbands. Under Old Testament law, divorcing one's spouse and marrying another (outside of infidelity) is adultery.

Her supporters are quick to remind us that Davis has repented and evolved. No doubt repenting is a basic and fundamental tenant of the Bible. But these Biblical laws don't apply just to Davis and her clan. Wouldn't the same God she believes forbids gay marriages but forgave her sins also forgive those of the LGBT community?

The reality is comporting one's behavior to the Mosaic laws proved to be an impossible feat thousands of years ago. Moreover, as a Christian, Davis would have to agree that the Bible teaches that the greatest commandment of all is to love thy neighbor. It's time for Davis and her supporters to stop selectively clinging to the Mosaic laws that divide us rather than embracing the covenant of love that has the universal power to unite us.

In the end, the point is not about whether one supports gay marriage. If we allow citizens like Davis and others to interpret the law as it relates to their beliefs, there's no end to the discrimination that could arise. In this instance, it's gay marriage. But what prevents the Kim Davises of the world from making similar interpretations as they relate to African-Americans, Latinos, women, the disabled or any group currently marginalized in our country?

Clearly, the civil rights icons that she has been compared worked to unite and not divide. King and Parks never let their personal biases become a battle cry to deny thousands of Americans equal protection under the law and they absolutely never defied a Supreme Court order. Yes, Davis, King and Parks all went to jail for what they believed, but that's where any comparison begins and ends.

This article was co-authored by Dr. Doveal Goins with Forensic Clinical Psychology Associate.