It's time for the World Economic Forum, and this year more than 40 heads of state and 2,500 other participants are unlikely to run short of topics to discuss. "Meeting against a backdrop of market jitters, heightened geopolitical risks and a renewed focus on climate change, there will be intense focus on how these A-listers propose to solve the challenges facing the global economy," reports Marketwatch about the meeting held at the ski resort of Davos, Switzerland.

What should be at the center of discussions is the increased inequality in wealth and income that is affecting U.S. economic growth in particular, but also the rest of the world. But instead of inequality, most of the attention has been focused on China's growth problems, as if China is the world's piggy bank. But it isn't.

How does inequality affect economic growth? Nobelist Joseph Stiglitz has written most recently about what he calls the "Great Malaise", and IMF President Christine LaGarde says is the "New Mediocre" in worldwide economic growth.

"The economics of this inertia is easy to understand," says Stiglitz, "and there are readily available remedies. The world faces a deficiency of aggregate demand, brought on by a combination of growing inequality and a mindless wave of fiscal austerity. Those at the top spend far less than those at the bottom, so that as money moves up, demand goes down. And countries like Germany that consistently maintain external surpluses are contributing significantly to the key problem of insufficient global demand."

What is aggregate demand? It is an economic term that describes the overall demand for goods and services from consumers, business, and government, first formulated by the British economist JM Keynes. Professor Stiglitz's thesis is that when most of the wealth goes to the top income brackets, less of it gets spent or invested in productive enterprises. 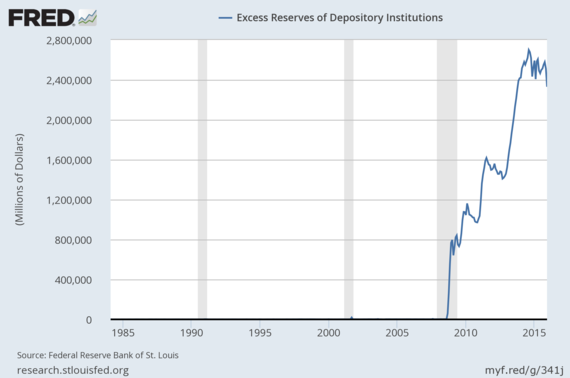 This is evidenced by the huge amounts of wealth that is hoarded where it does the least good. Corporations are holding more than $5 trillion in cash and cash equivalent assets, rather than investing it in productive enterprises. And the Federal Reserve is holding more than $2 trillion is excess reserves in MZM deposits, meaning that they earn little or no interest.

In fact, the St. Louis Federal Reserve Bank reports the Federal Reserve Banks currently hold some $2,330, 461,000 in excess reserves (that are reserves beyond the required minimum bank capital reserves), whereas it was close to $0 before the Great Recession. Why isn't it being invested productively?

The New York Fed says it is a byproduct of the Fed's easy credit policies. The Federal Reserve Banks lend to commercial banks so that banks with constrained liquidity as a result of the Great Recession will continue to lend. Those loans end up as excess reserves on the Fed's books. But who are the banks lending to? Much of Wall Street's borrowing is for leveraged buyouts, or buybacks of stock to boost stock prices (and CEO salaries, let us not forget).

This is not where banks should be lending, if the goal is to increase productivity, and so economic growth. A major reason for the Great Malaise is the huge cutback in government investments in productive enterprises, such roads and bridges, or R&D, or education, due to the ongoing austerity policies of the western world mentioned by Dr. Stiglitz.

In the U.S., it has been conservative politicians -- mainly Republicans -- that oppose any government stimulus programs, which they believe takes wealth away from those that already have it. But that 'no compromise" mentality made infamous by former House Speaker Boehner has made everyone poorer in the long run, and our public infrastructure in grave danger of collapse.

There is some hope with the new U.S. $1.1 trillion budget agreement, plus the $305 billion Highway Infrastructure Act, plus the Paris Climate Change Accord that should pump $Billions into alternative energy technologies, will mean government is coming back into the productive investment game.

That is how our public highway system was built, after all, as well as our space program, countless medical advances, public education, disaster relief, and the Internet. It took public monies to create the new technologies that private enterprise believed was either too risky, or didn't benefit them directly. So how much longer can such austerians continue to block economic growth and a more hopeful future?

"The obstacles the global economy faces are not rooted in economics, but in politics and ideology," continues Stiglitz. "The private sector created the inequality and environmental degradation with which we must now reckon. Markets won't be able to solve these and other critical problems that they have created, or restore prosperity, on their own. Active government policies are needed."

Will those attending Davos give us any new ideas on how to boost economic growth? The Paris Accord brought 200 countries together to limit global warming. Can these 'A-listers' do any better? I doubt it.