At its largest gathering to date, the World Economic Forum is expected to be “more serious” than recent years because of the pressing economic, health and terror turmoil. But the U.N. wants to make sure that the devastating threats against children aren’t left out of the conversation.

More than 2,500 participants are expected to attend the five-day event in Davos, Switzerland, where business leaders, politicians and Nobel laureates are tackling such heavy topics as deepening global inequality and declining trust in government. But experts say that such grave issues as Ebola and Islamic extremism will inevitably take center stage, and UNICEF has urged participants to also put crises vulnerable children face at the forefront of the event.

“The world has made significant progress in the last 15 years, and yet millions of children remain marginalized,” Yoka Brandt, UNICEF deputy executive director, said in a statement. “This is a critical opportunity to reach the children who have been left behind.

Nearly 1 billion children are subjected to corporal punishment
by their caregivers on a regular basis, according to UNICEF. In addition to incurring physical injuries, such violence can lead to psychological trauma, impaired cognitive development and reduced interest in education. 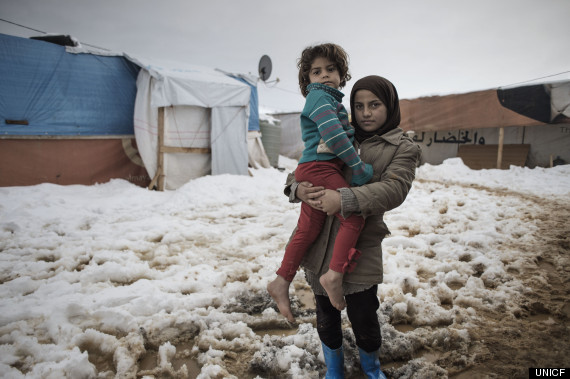 Last year, 230 million children were living in conflict zones, and many more were affected by both man-made and natural disasters, according to UNICEF.

While sympathies run high in the immediate aftermath of a crisis, inspiring donors to help, supporters need to also focus on developing long-term solutions to better prepare children and their families to withstand –- and cope with such trauma.

For example, nearly four years into Syria’s civil war, at least 7 million Syrian children are expected to face their worst winter since the conflict began, since heat and warm clothing have become scarce. An estimated 300,000 children in Haiti work as domestic laborers, a figure many believe has grown since the devastating earthquake hit five years ago, because impoverished parents and orphans have even fewer options.

An estimated
6.6 million children died before their 5th birthdays
in 2012, according to UNICEF. The top killers were malaria, pneumonia and diarrhea, conditions that rarely take the lives of well-off children. With increased access to vaccines, nutrition and clean water, millions of deaths could be prevented among impoverished kids.

Get Every Child Into the Classroom

Across the globe,
57 million children
are not enrolled in school, according to the U.N.

Learning is especially crucial for kids living in impoverished homes, since it’s the No. 1 guarantor of income, wealth, status and security, advocates say. But for girls, it also comes with the reduced risk of infant mortality, contracting HIV and being forced into child marriage.

About 570 million children under 18 live
below the international poverty line of $1.25 a day,
according to the humanitarian organization.
Children experience poverty more acutely than adults
due to their vulnerability and dependency and because lost opportunities in childhood often cannot be regained later in life, according to UNICEF.

Children who grow up in struggling households face a host of debilitating risks, including experiencing chronic stress, which can impair brain function in adulthood, and developing psychiatric disorders. They’re less likely than financially stable children to perform well in school and have a higher chance of contracting infectious diseases, such as malaria.

While impressive gains have been made in improving maternal and childhood health, such as reducing childbirth-related deaths, adolescents face a number of increasing risks, and aren’t getting the attention the desperately need.

The number of AIDS-related deaths has dropped among all age groups, besides the 10- to 19-year-old demographic, according to Craig McCure, UNICEF’s associate director of programs and chief of HIV/AIDS. In fact, the virus is the second leading cause of death among adolescents worldwide. Part of the problem, according to McClure, is that prevention efforts focus predominantly on mothers and children, and once adolescents “age out” of the programs, they have nowhere to turn.

Davosworld-economic-forum-2014impactdavos-2015Violence against children
Go To Homepage