Iranian Foreign Secretary Mohammad Javad Zarif certainly got a free ride at this year's World Economic Forum. His views on the region went completely unchallenged in the absence of a counter-argument, and due to the format of his session, members of the audience were not able to ask questions or intervene.

However, one must admit that Zarif's ability to twist facts is phenomenal! Indeed, had there been an award at Davos for "Spin Doctor of the Year," then he would have won it... hands down!

Iran's FM made it seem like Tehran was the region's cuddly teddy bear who has been desperately trying to reconcile with Saudi Arabia, which he naturally portrayed as the "big bad wolf."

Frankly, I wasn't sure if Zarif was being serious or joking when he stressed in front of the WEF audience of global movers and shakers that his country is a firm believer in diplomacy as a means of resolving conflicts.

If this is the case, then what on earth is the Iranian Quds Force (or paramilitary terrorist groups affiliated to it) doing in Iraq and Syria? In fact, this elite Revolutionary Guard Unit is so focused on destabilizing Iran's Arab neighbors that I honestly suggest it should be renamed the "Anywhere-but-Quds Brigade."

Furthermore, if the Iranian regime is truly such a peace-loving dove, then perhaps it should consider withdrawing from the three UAE islands it still occupies, stop supporting the murderous Assad regime which has overseen the killing of 200 thousand people and stop backing Yemen's Houthi militias which staged a coup against the legitimate government of President Hadi. 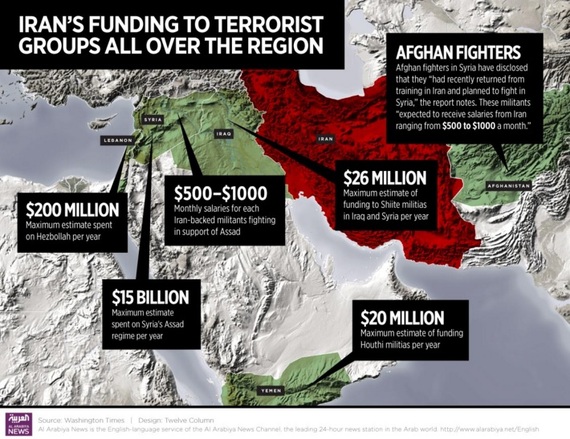 Of course, this was a fair comment as the Saudi participation was perceived to be mostly business-oriented. The delegation -- which consisted of a few ministers, government officials and prominent businessmen, as well as a number of princes and individuals coming in their personal capacity -- wasn't seen by many to reflect the size, prominence and change happening in the kingdom.

Zarif went on to stress that this attack was officially condemned and that the perpetrators will be prosecuted. However, he -- unsurprisingly -- didn't dwell much into how this attack was allowed to happen in the first place under a regime which otherwise wouldn't allow a mosquito to freely move without permission!

Excuse me? How was Riyadh supposed to act when - on top of all the aggression mentioned above -- the Iranian regime sat back and watched its thugs attack and set fire to the Saudi embassy in Tehran?

Zarif also dwelled on how Saudi Arabia's defense expenditure is far greater than Iran's -- yet he failed to recognize that this is a natural result of Tehran meddling with the region left, right and center. At the end of the day, Saudi Arabia would also prefer to spend more of its money on development -- however with Houthi missiles coming in from the south and Iran bragging from the north about becoming an empire and occupying Arab cities, what else could Riyadh have done?

Naturally, not everyone in Davos bought the Iranian narrative, however almost everyone I met said one thing: "we wish the Saudis were here to be able to tell their side of the story."

Of course, this was a fair comment as the Saudi participation was indeed low key compared to size, prominence and change happening in the kingdom: a few ministers, government officials and prominent businessmen, as well as a number of princes and individuals coming in their personal capacity.

However, I understand that behind closed doors FM Zarif was taken to task on his country's shameful stance on Syria by a former senior Saudi official. Unfortunately, only a handful of people -- and no media -- saw that.

Now, the kingdom is not without its faults and certainly not above criticism. However, until it is fairly represented and publicly present at such important global events, this will only mean that Iran can continue getting away with spinning the truth and Zarif's politically incorrect fairy tales will prevail.

*This blog post was originally posted in Al Arabiya English.