On Thursday, January 29th, I scrambled into the U.S. premiere of Canadian writer/director, Lindsay MacKay's independent feature, "Wet Bum." This was my second attempt to see this film as the first one had been full! "Wet Bum," is a tender "coming of age" story of Sam (actress, Julia Sarah Stone), a fourteen year old weathering her way through the confusion of life as a teenager dealing with bullies, her crush on the swim teacher, her changing body, her mother, working at a retirement home, understanding elderly people and the cycle of life. The story is a personal one to the director whose parents had worked at a retirement home where she learned that "being confronted with people at that stage in life was humbling." When asked about how she approached working with people in different age ranges, Ms. MacKay answered, "I think that is my jam. The character, Sam, is an old soul. I am kind of like an old soul." 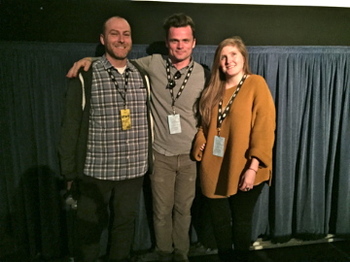 Friday, January 30th, I started the day with a screening of "The Unwelcoming," directed by Robby Elmaliah. The film tells the story about the struggles of an immigrant family from the Tunisian island of Djerba moving to Israel in 2006. The documentary gives fascinating exposure to the conflict of being an immigrant and how difficult it is to assimilate into a community that doesn't share the same culture and customs.

Having some time before the next film I headed over to the UGG Australia Pavillion behind the Lobero Theatre to catch the last ten minutes of the Social Justice Documentaries Seminar. Little did I know what I treat I was in for! The panel happened to include the Director, George Butler, and Writer/Producer, Caroline Alexander, of the documentary, "Tiger Tiger," that I was next going to see. 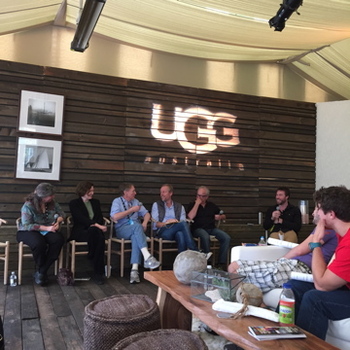 I introduced myself to George and Caroline, so curious to know how they decided to make a film about Dr. Alan Rabinowitz, whose work I had been "obsessed with" for years. In 2008, Caroline started researching for a piece she was doing for The New Yorker called "Tigerland," about the tigers living in the Sundarbans, the largest mangrove forest in the world spread across part of India and Bangladesh. "That's when we decided we have to make a film about this. Alan was the person who had to be in it. He was the focus through which we channeled all the emotional energy." 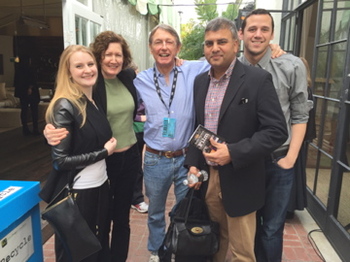 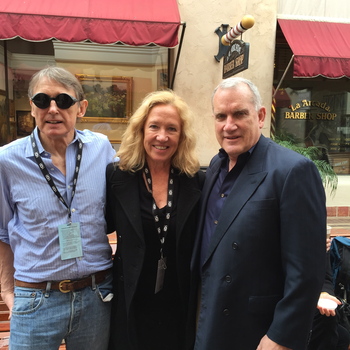 "Tiger Tiger" is a beautiful, riveting and important film. It is a call to action, and an urgent one. Dr. Rabinowitz, 59, who looks strong and healthy revealed that he is battling leukemia. He has always been a passionate advocate for tigers but now there is a deeper seriousness to his message. "Tigers are more than the world's greatest predators. We don't have to see the tiger go instinct. There are only 3000 left of these regal animals. There is nothing we have to figure out. We just have to do something. This is something we can do. We just have to care." Dr. Rabinowitz started an organization called Panthera to make it easy for people to get involved, www.panthera.org. 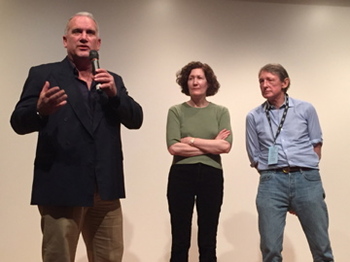 Next I wasn't sure which film to choose but as I walked out of the theatre, I saw a friend. She introduced me to Pico Iyer who was in line for "Partner with the Enemy." Next thing I know I headed into watch that film, too. It was a lovely film about two women, one Israeli and the other Palestinian, who start a business together on the shipping docks. This film, directed by Duki Dror and Chen Shelach, is a beautiful story of friendship rising above political and geographical divides. 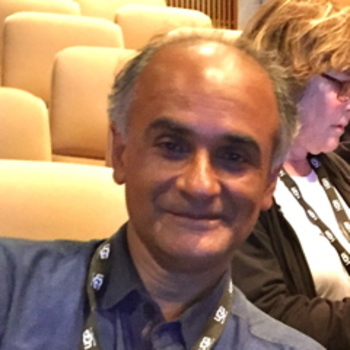 Next came a film I had heard about and was really looking forward to, "The Generosity of Eye," a documentary directed by Brad Hall, about his wife, Julia Louis-Dreyfus discovering a side of her father, his art collection and plan to sell it on behalf of charity. The film is personal and tender and moving. Director Brad Hall, not only shows us the fascinating story of how William Louis-Dreyfus amassed an art collection of "outsider" artists like Kandinsky, Jean Dubuffet, Max Ernst, Bill Traylor and James Castle, and the genuine affection the artists and William share, Hall, with the willingness and generosity of Julia and her father, gives us intimate moments of the heart between a daughter and a father that are incredibly touching. There are layers of important and moving stories in this film not the least of which is the message of caring and being generous and sharing the wealth, all themes behind social justice. It is a film with a powerful message of doing. William Louis-Dreyfus was privileged and successful and put together a collection of 3000 works of art. Now he is selling off each piece of his collection with all the proceeds going to the Harlem Children's Fund started by Geoffrey Canada, that gives kids, who would not otherwise have had the opportunity, a wonderful education. That kind of says it all. 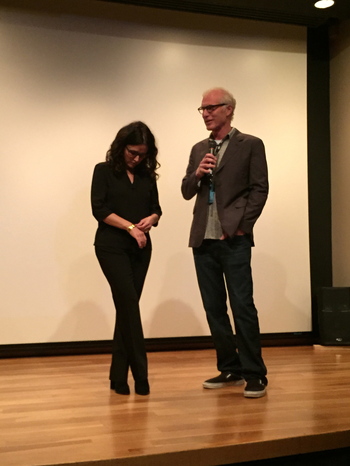 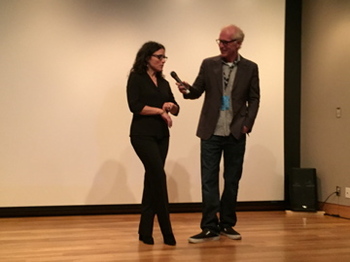 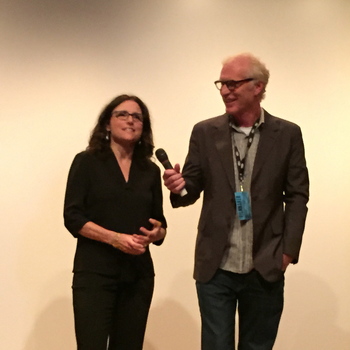 Amazing that I had any energy after all of that but I thought I wanted to race back up to the Arlington Theater to catch some of the Tribute to Jennifer Aniston receiving the Montecito Award. The Montecito Award is given to a performer who has given a series of classic and stand-out performances throughout his or her career and those whose style has made a major contribution to film. 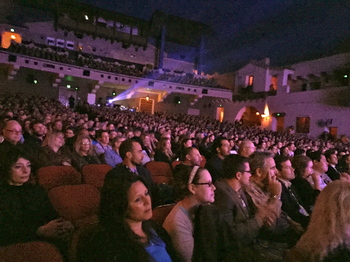 The theater was packed. The only seat left was one way, way up in the front row, farthest right. I am not sure I had dinner. No, I definitely had not had dinner! Nevertheless, it was great to take in this occasion with Pete Hammond interviewing Jennifer going through film clips illustrating her long history of comedic acting, as well as her recent dramatic work in "Cake." 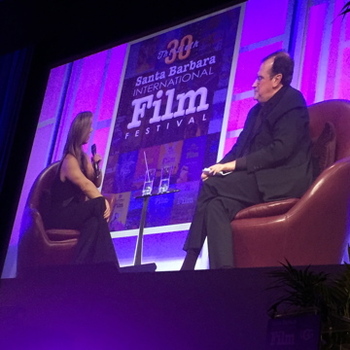 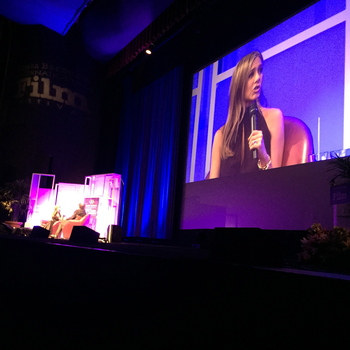 Speaking on why she did "Cake", "We've got to feed our souls on every level. We need a creative challenge." Many clips from her different films were shown," The Breakup," "The Switch," "Friends with Money," "Marley and Me," "Office Space," "We're The Millers,""The Good Girl," "Along Came Polly," "Horrible Bosses," "Horrible Bosses II," "Wanderlust," to name some. Mr. Hammond mentioned that "6 of her movies have grossed over 200 million" and that "in 2011 was named the 'sexiest woman of all time' by readers of Men's Health magazine." When talking about "Cake", Jennifer said, "that one 'takes the cake.'" When asked how she feels about receiving the Montecito Award, she teased, "I didn't know that I was old enough!"

Mark Scher, President of the SBIFF Board of Directors, presented Ms. Aniston with the Award. 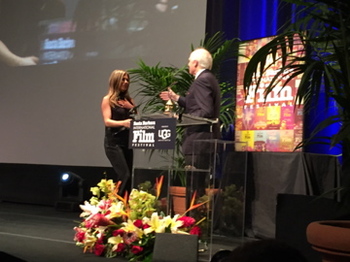 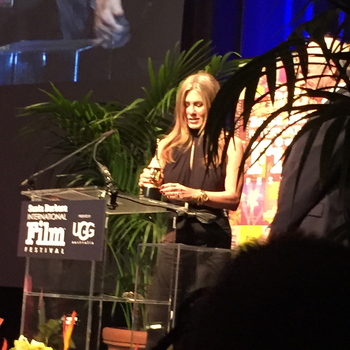 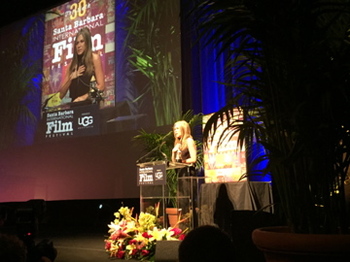 Jennifer was very grateful, thanking everyone. She thanked her agent, Kevin Huvane, and Christine Hahn, her producing partner of 25 years to which she was teary. She was visibly appreciative and in awe. She was a real star. 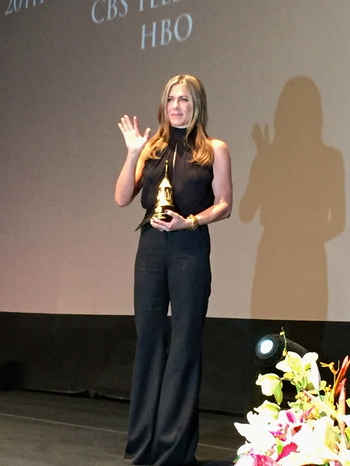 As I was leaving the theater, inching my way along with the exiting crowd, Justin Theroux, Jennifer's fiance, was right behind me. I commented to him, "Aren't you proud?" He answered, "Incredibly." The moment called for a Selfie. I obliged. You can see it on Instagram. Sally_Fay_Huffington_Post.

Tomorrow is another day!