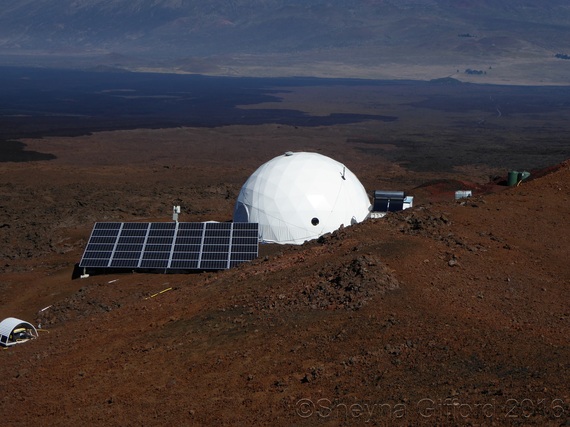 Until we get really good at transgressing the laws of physics, we live under the thumb of certain hard facts. One of the hardest is this: we can't physically be in two places at once. Happily, through miracles of modern technology like speakerphones, Skype, and virtual reality, as long as we're on the same planet as an event, we can virtually attend. At least, our likenesses can. Our voices, faces, and/or avatars can appear in our places. Using these work-arounds, our essences can sort of exist in two or more places at once. Virtually near-infinite versions of ourselves, some more robust than others, can experience elements of distant locations and the people -- with a catch.

"Distant" here is "less than or equal to the maximum circumference of the Earth and nearby orbits." This modus operandi does not function at an interplanetary level. In fact, it starts to break down as soon as you get to the Moon. The delay -- 1 second each way -- is barely perceptible, but nonetheless palpable. Send a command -- wait for it, wait for it -- then get a reply. "Hello!"... 1... 2 -- "Hello!" It's ALMOST like being there, but not quite. It's more like awaiting an echo. 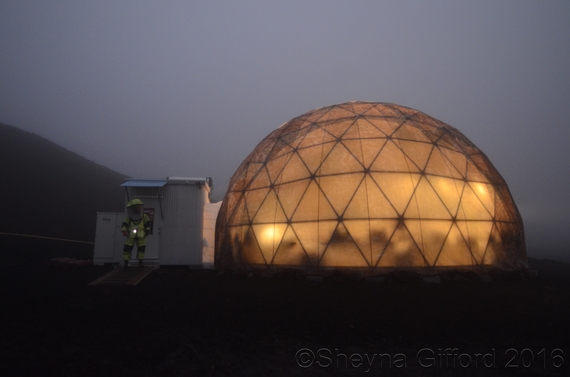 The further out we go in the Universe, the more protracted these conversations become. By the time you get to Mars, delay could be as short as 4 minutes -- like being placed "on a brief hold while we find someone to serve you" -- or as long as 20 minutes each way; like Mars is telling you, "Go on a lunch break. Your reply will be waiting when you return."

This is not a complaint by any means. Compared to the good folks running the Juno mission to Jupiter (due to arrive on 7/4!) a call to Mars represents a rapid turn-around. Juno's controllers currently wait 1.5 hours for a reply from their spacecraft. The folks listening to signals from Voyager 1 stay on hold for more than 37 hours. Still, our lag, however tiny on the scale of the solar system, means that we on simulated Mars are never quite there on Earth: for the people we care about, or for ourselves.

To be fair, even when I stayed put on one planet, in the course of more than thirty solar revolutions I missed an event or two. Due to residency training, I was absent during my only sibling's wedding. I missed the funeral of one of my best friends from high school because it occurred on the same day as my cousin's wedding. These circumstances aside, I've made every attempt to be there -- virtually if not physically -- for marriages, births, deaths, anniversaries, chemotherapy, and just about every important happening in the world where my presence could make a difference. That is, until my presence was requested on a different world.

It's been a little over 300 days since I was physically present for anyone back on Earth. Now seems like a good time to acknowledge the things that I have missed.

To mitigate the potential damage from this rift, we've begun studying how our presences back home (and our family's absence in space) can best be substituted. Based our experiences during the last 10 months, I can report that sending videos back-and-forth satisfies some basic needs. We can see and hear people. They can see and hear us. Everyone walks away knowing that everyone else basically OK. What else does one need, really?

Before yesterday, I couldn't have answered that question. Now it's clear that there's something more that we space travelers might need from time to time -- something that regular video cannot supply. 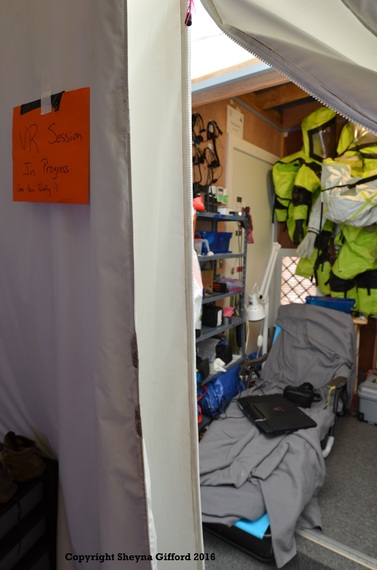 The HI-SEAS crew goes on VR trips in the airlock: one of the few places in the hab where it's large enough (and quiet enough) to set up the system.

The news of my grandmother's passing arrived in the morning via an email from my mother. The crew had a full day of studies ahead (there's really no day off in space). Coincidentally, I was at the helm for that particular day's experiment. So I set to work getting everything ready. When my turn came, I hooked myself up to all of the gadgets and gizmos, started the recorder, and hit "Go" button on the 3D virtual reality system. I had done this before, many times. This time, however, the experience was different.

The city that appeared before me was one in which I used to live. By happenstance, the high-resolution 3D images were taken in the early summertime, which is taking place right now on that continent on Earth. They were taken around the same time of day when I was watching the video in the hab: early afternoon. The images were of places that I had visited frequently. In an unexpected twist, people walking past the camera rig would occasionally stop and peer at it. Sometimes, they would even point and gesture to it. I experienced the satisfying sensation that life was going along back at home just as it should have been -- not without me, but with me present as a sort of spectral spectator. Though you might not expect it, that part of the VR experience -- being noticed by people on Earth -- was the most moving. The visual cues told my brain, if not my mind, that I was home.

Being able to give future space explorers this experience on demand may be critically important. As our crew architect recently pointed out: if this were really Mars, we would have just arrived. Since mankind's smallest target area on Mars is a few kilometers at best, we would have spent much of these last few weeks running around looking for our stuff. Hopefully, we would have found all or most of it by now. Hopefully, all or most of it would be functional (or would be after some intrepid astronaut intervention). Then those first human visitors to Mars may discover, as we have, that missing Earth is not a regular occurrence. Here, the vistas here are grand and strange. We appreciate them for their beauty and oddity. The scenery is more than good enough. No scenery can substitute for people, though: we miss people and their lives, if not life on Earth, persay. 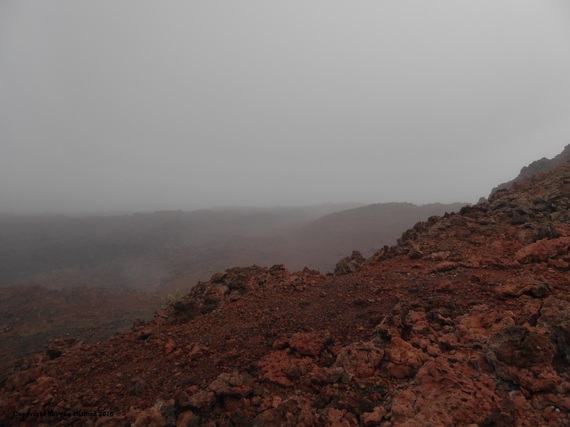 Being gone for three years, not just one, means that each man and woman on that journey will miss everything about people's lives that we've missed, times three. In a way, it's a frustrating experience. There was nothing I could do when my father was attacked. It's also a sort of relief: because I could not be there, a friend of the family stepped up and is living with him now -- done and handled. In that way, being in space is both a sacrifice and a ticket to ride. I told my grandmother that I loved her and thanked her for being in my life over delayed video. That was hard. On the other hand, in my last memory of her, my grandmother is standing by her white sink washing green grapes. She's on her own two feet in her own home. She's smiling. I have that image of her, happy and healthy, because I was here, not there, for the end.

I've come to realize that like most of life, this whole space thing is a give and take. In a recent interview (by delayed audio signal) I was asked, "How are you handling the stress of isolation?" My reply was: "How are you all on Earth handling the stress of waking up every day, getting to work through traffic, racing to get everything done so that you can get the kids to soccer practice or play league volleyball with your friends, then shopping, cooking, and fixing the house?" I seem to recall that on Earth the demands on one's time and the places from which those demands might emanate are nearly limitless. Here, the demands on our bodies and minds are highly limited by the simple fact that we aren't on Earth. Our commute is remarkably short. Though we're busy growing the radishes under LEDs, there is no shopping or insuring to be done, no phones to answer, no snow to shovel off the driveway. I truly believe that the average stress in space and on Earth is equal in magnitude if differently distributed -- with one notable exception.

Difficulty with long distance -- really long distance -- arises when there's a part of our lives that cannot be assigned to someone else, or something particular about Earth that cannot be replicated in space. One of those non-replicable things is being there for your friends and family in their moments of triumph and grief. Another is the sheer mass of humanity. By virtue of infinite diversity in infinite combinations, while on Earth we know that there's someone nearby going through the exact same thing that we are going through. We might not know who they are or where they are, but we know that they are out there: by the dozens if not hundreds or thousands. The five other people here all know what it's like to look for a certain type of volcanic rock while experiencing intermittent radio failure. (Thankfully.) None of them are going through the loss that I'm going through right now. It's me alone. Or rather, it was. In an unexpected moment of relief, I stepped back into a familiar city on Earth and was suddenly surrounded by other people -- people who might be and are experiencing anything, from extreme joy to extreme defeat, loss and gain and everything in between. In spite of the distance, I was virtually there with them and they were there with me -- if only for a moment.