Day 34 has brought the Alguita to the International Dateline! In the email below, the crew reports on their very interesting day full of sightings, plastic debris findings and unique ways to pass the time at sea.

Finally, 34 days out of Long Beach and 4,441 nautical miles into this mission and we've reached our goal, the International Dateline and a brand new line of sampling to add to the databank!

Our transition into the eastern hemisphere (and into tomorrow) was quite the picturesque "after school special" moment. The sun was shining and the ocean was glassy. A pod
of Striped Dolphins was performing starboard of the vessel and an albatross or two was flying about. 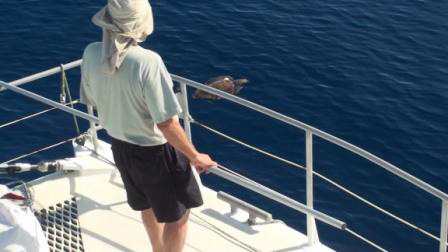 The crew was gathered on deck as Captain watched our position from the helm, counting down our approach to the Dateline over the hailer. We crossed, and yes, at that moment,
the dolphins decided to up their performance to some aerial moves. Captain joined us on deck and we relished in the moment of achieving our goal for a bit-the conversion tending towards the usual, marine debris.

Before we reached the Dateline, we had a strange run in. Around 9am, I was directed from the debris spotters on deck (Captain and Drew) to turn hard starboard so we could fetch an obscure piece of debris in the distance. As Captain was dipping down the net to retrieve it he realized that it was far from marine debris-it was a sea turtle. The presence of this guy highlighted the reason marine debris is such a tremendous issue; the juvenile turtle was feeding in an area where we had been fishing out debris all morning, introducing the possibility of plastic ingestion.

It is easy to imagine how the plastic fragments could be inadvertently scooped up-and marine debris ingestion in sea turtles has actually been recorded. The turtle has a large white mass growing off its shell and Drew jumped in to get a better underwater angle on our reptilian friend, but he caught onto us and took off into the blue abyss.

Refreshingly, we pulled up only 3 plastic fragments in the trawl (at least from what we could see with the naked eye). Manta sample #30, deployed a ½ hour after #29, produced a ridiculous amount of plankton. It took up a 3 gallon bucket (for reference, the average sample we pull out is about a ½ liter or so).

It wasn't feasible for us to save the whole thing (we are running low on formalin to preserve the organics in the samples) so we rededicated portions to the education sample stock.

Manta sample #33, the last of the day, ran for a half hour and produced an
astounding amount of plastic. A stark contrast to Manta #29 deployed 3 hours (roughly 9 nautical miles) prior. The trash accumulation zone is patchy and tremendously dynamic.

Before the trawling and Dateline crossing, we spent some time discussing our protocol for debris documentation in order to maximize the value of the data gathered on future voyages. Our focus has been on researching the small scale debris pulled in from the trawls and we are still learning how to best approach the documentation of the larger debris we are encountering.

The whole protocol discussion process inevitably ended up delving into the Alguita, which turned us on to Jeff's old oceanography book he contributed, which then lead to
the ultimate quiz session. We passed quite a bit of time picking random oceanography terms and testing each other on our marine realm vocab. Oh the ways you entertain yourself at sea; spending time learning new and obscure knots, playing chess (the Jeff-Joel chess score: Joel up, 26-20. These boys are chess machines.), exercising, cooking, snacking, reading, looking in fish (if you're Christiana), repairing boat parts, expanding your language repertoire (Greek, Spanish, and Japanese have all been dabbled in), seeing how many bird shots you can get with your telephoto lens (if you're Jeff)...the list goes on.

We are chugging along at 3 knots with the main and Genoa up, banking on some more wind to come our way as we head north. We will continue sampling along the Dateline for the next 300 miles, up to 40N and then head east after we pick up the westerlies to start our return to Hawai'i.

From the International Dateline,
Nicole for Captain Moore