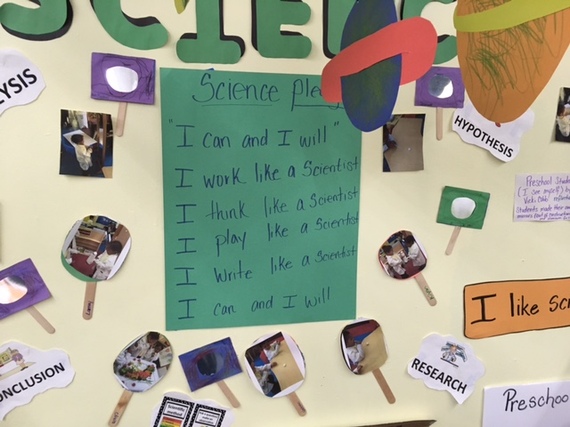 There's a Catch-22 for low income families when it comes to day care. Two incomes are essential for any quality of life and that means finding affordable day care. Like most parents, families with limited resources want the best for their children. The state and federal government has made subsidies available. But according to the Center for American Progress:

"Only about 22 percent of children in low-income families currently receive federally subsidized child care, and while preschool enrollment has increased nationwide in recent years, the lowest-income children are the least likely to participate in preschool programs. Twenty-eight percent of 4-year-olds were enrolled in state-funded pre-K programs, and only 4 percent of 3-year-olds were similarly enrolled. Forty percent are not enrolled in any pre-K program at all. Clearly, the publicly funded services that are available are lacking, insufficient, or both."

The Lanza Learning Center in Yonkers, New York is a stunning option for financially challenged families. In 2011, Ray Thomas, a social entrepreneur, who had already established the Xposure Foundation for after school programs for underserved students, acquired a struggling daycare center in a poor area of Yonkers. He had a benefactor, Patricia Lanza, who gave him sufficient resources to do major renovations on the building and to start the operations anew. He also had a vision that this would be a "science and technology" daycare center and he asked me to do some staff development based on my Science Play books, which would become the core of the curriculum. That was five years ago.

Last week, I visited the Lanza Learning Center for the first time, since my long-ago involvement. The space is colorful and inviting; the staff welcoming. There is a quiet hum to the building. I didn't hear any crying. I was given a tour of the rooms, all large, bright, open spaces beginning with the infants (starting at three months), the early toddlers, the late toddlers and finally the pre-K. Everywhere, there were signs of engagement and activity. The staff was attentive and affectionate with their charges. They gathered in an upstairs room (pre-K) to have refreshments and to show me how they've used my books with the children and to hear a word or two from me.

The audience was a mix of children and adults, some with children on their laps. But it was hard to figure out whether it was a parent or a teacher holding the child. The children were exceptionally attentive and a little shy about showing me what they had learned from my books. When it was my turn to speak, I did a hands-on interactive demonstration. Every eye was on me. No crying! No running around! No adults admonishing anyone! Everyone was up for the challenge, including the adults and those younger than two. How does such a thing happen in a daycare center? It was like we were one huge functional family.

Make no mistake, Lanza operates on a shoestring. Mrs. Lanza died in 2014 and her financial support came to a halt. But this was not before the center had been named in her honor and the basic instructional systems had been established. Currently the enrollment is 90 children of which 85% are government subsidized; Lanza is now fiscally sustainable and there is a waiting list.

The director, Janea Powell, is hands-on with staff and students. The most important quality she looks for in potential teachers is love of children. All of the teachers must be high school graduates with at least 12 credits in early childhood education. These are low paying jobs, but well above the minimum wage. Most of the staff is young and this job can be entry-level to careers in education.

The days are well-scheduled, activities are developmentally appropriate (key to optimizing learning) and many lessons are book related (not just to mine). There are lots of science activities and they even have a science song, which they sing with gusto, the words are above.

The Lanza Learning Center is a model for what is doable--creating a cost-effective, experientially enriched environment that honors the humanity of our precious, youngest human beings.