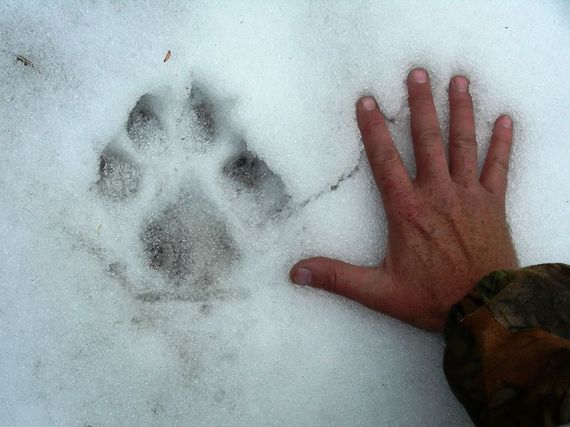 Today is a shameful day in Michigan history. This morning 1200 hunters are out with high-powered rifles trying to kill forty-three wolves. And for what? Nothing but bloodlust.

It began when legislators created an uproar by repeating stereotypical and fearful stories about wolves, which have no basis in reality. The legislature then enabled the Michigan Department of Natural Resources (DNR) and the governor to launch a wolf hunt to "control" a mythical "dangerous" wolf population.

There are 9.88 million people in Michigan. That's 9,883,000. Meanwhile, there are six hundred and fifty-eight wolves. That's 658. The state of Michigan contains over FIFTEEN THOUSAND times more humans than wolves. Who is out of control? Not the wolves. And who is inventing lies to kill? That would be the humans, not the wolves.

How did our supposed "managers" of "natural resources" come to decide that this slaughter is somehow scientifically justified? Shame on those supposed adults in the DNR for not having the guts to question that if the millions of humans dominating this state can't learn to live with a few hundred wild wolves, then what kind of "humans" are we? Are we really "civilized"?? Do we REALLY love nature, or do we merely love our ability to control, dominate and pretend to be little gods with guns, or maybe biology degrees?

What kind of "scientist" gives their "scientific approval" to the slaughter of nearly ten percent of a population that is already living on the margins of what humans have left them?

The kind who prioritize not pissing anyone off so that they might continue to collect their salary.

Wolfs are an intelligent species living in social groups that, before humans arrived, was once one of the dominant animals in these parts. What kind of hunter, or politician, goes after the scarce remnant population of such vital creatures, admit it, just for fun? Did any of them propose canceling the hunt after the untruths that were the basis for the hysteria were revealed?

Certainly wolves are predators that kill to live. That trait reminds me of us. They are really good at what they do, and their presence creates a healthier ecosystem. That trait does NOT remind me of us. There is no ecosystem in the world that's better off for the presence of humans.

Note to DNR, hunters and humans: we neither are good at, nor have the right to, "manage" other living things exclusively for our benefit. In the modern world with 7 billion humans and handfuls of rhinos, tigers, wolves, gorillas, and others species near oblivion, the assumption we have the right and ability to "manage nature" is absurd.

And yes, my fellow environmentalists, and any scientist who has not sold out or is considering getting that thing called courage, if speaking this truth gets us screamed at - so what. Nature is being slaughtered in front of us. And after nature goes, we go. Is this how we go down? With people who know the truth staying silent so those who slaughter nature for profit and/or ego don't get upset with us?

It's a day of shame to be a Michigander. To our non-human brothers and sisters, I give my full apology. That this slaughter begins today means I failed you. I vow to try to be a better human.