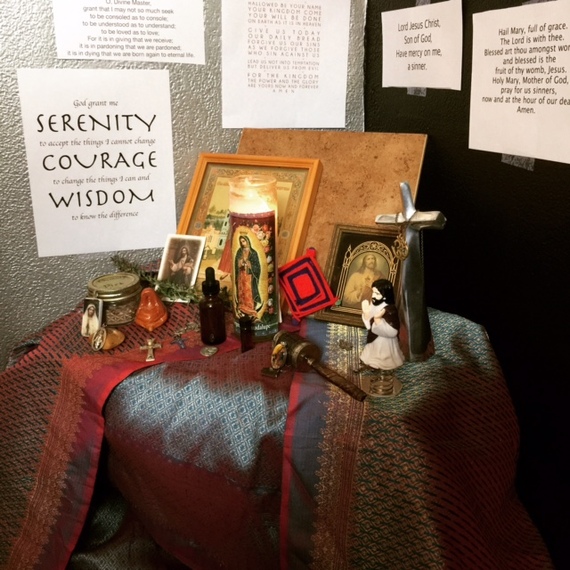 First the good news: After four months of preparation, I have officially started my year-long quest to more seriously understand what it means to follow Jesus, aka "My Jesus Project."

And now the bad news: After today I still have 363 days left of this. Turns out Jesus stuff is hard.

It's not even that I've done anything in particular that's hard. I mean, the 30-day fast from solid food isn't until next month, and I still have time to figure out how I'm ever going to feed 5,000 people. I haven't even been crucified or put in jail or anything. So far my main tasks have been setting up my prayer shrine for my daily meditations (see above), studying one of the gospels each day and being particularly mindful of my own body and of the humanity of others I come into contact with.

But just that is hard work.

Yesterday was day one, beginning my first month, in which I'm exploring "Jesus the radical," with Christian anarchist Mark Van Steenwyk as my mentor. He's started off going easy on me, recommending the mindfulness exercise and taking more public transportation. Hey, one out of two ain't bad; I've got 26 days left in the month to work on the public-transportation thing. I got my prayers and gospel study (starting with Mark for month one) done, and I was successful in getting my kids to school without yelling at them even once -- or at least no more than twice. But in addition to taking my car everywhere so far, I'm behind in my pledge to walk 1,000 miles in a year. Although that only works out to about three miles a day, I'm already just under four miles for two days.

Oh, and Mark has warned me that he has some much more challenging things in mind for me this month, and that he was just breaking me in, getting me used to the shallow end before tossing me in for the sharks, complete with chum underwear.

But already I've noticed some differences -- or at least some other people are. I doubled down on being present and contemplative during worship yesterday, which is apparently something people aren't used to seeing me do. My son kept asking Mommy what was wrong with Daddy, and I actually got a text message from someone at church making sure I wasn't sick.

Do I seriously look that pained and awkward when I'm praying in public? On second thought, don't answer that. I already know.

So why put myself through this in the first place?

Here's my thinking: We Christians claim to be followers of Jesus all the time, but do we ever seriously think about what that means for, well, everything in our lives? From what we eat, drive, watch and wear to how we engage everyone we meet (even that dumb-ass over there), Jesus is supposed to inform it all. But if that were true, I'd expect the most common adjectives offered to describe Christians to be "judgmental" and "hypocrites" (which they are, based on the research for my second book). Like Gandhi said, "I like your Christ; I do not like your Christians. They are so unlike your Christ."

He would know far better than most of us what the "Jesus path" looks like in the real world, so I'm going with Gandhi on this one.

I have to think it's about more than a recent meme I saw, in which Moses holds up the revised "Two Commandments," which are: (1) Be cool, and (2) don't be an asshole. Both reasonable starting points, I guess, but If I can get the sum total of what Jesus was about from the equivalent of a Hard Rock Café slogan, he's not really as profound as I'd like someone I'm trying to craft my life after to be.

Another friend asked me why I didn't just set the whole Jesus thing aside, given that so much pain had been wrought in the name of Christianity over the centuries, focusing instead on just being a good person.

Also a good starting point, but again, I feel like, at the core of my being, there's a bigger, deeper, more urgent call than just to the absence of jerkiness. And even if there isn't more than that (no, don't even bring up the "celestial-fire insurance" angle), it seems worth it to try to find out. What I can say is that, despite my attempts to disengage from the Jesus narrative, it haunts me, to the point that I feel like I might as well throw myself more deeply into it, at least for a year, to see what happens.

If I do it longer than that, I'm pretty sure Amy will divorce me. She's already not thrilled about the whole thing. She was pouting at dinner this weekend, when I was going over my plans to get started.

"Except be married to the guy who's doing it, and that's a lot."

"Good point." I stuffed my face with my sandwich.

"Plus," she sighed, "it's going to make me change things, and do things, and even give up things. And I don't want to."

And there, ladies and gentlemen, is the rub.

I don't really want to change things, do things and give up things either. But if the first two days are just the trailhead on this path, I don't think there's any way around it.

Want to follow along on this journey, and maybe even help out? Track my progress on my blog with the category "My Jesus Project," or search "#MyJesusProject" on Facebook and Twitter. You can also go to the My Jesus Project website to follow the project or add your email address to take part in it.

Author of "Leaving A-Holiness Behind," Host of Homebrewed CultureCast Podcast