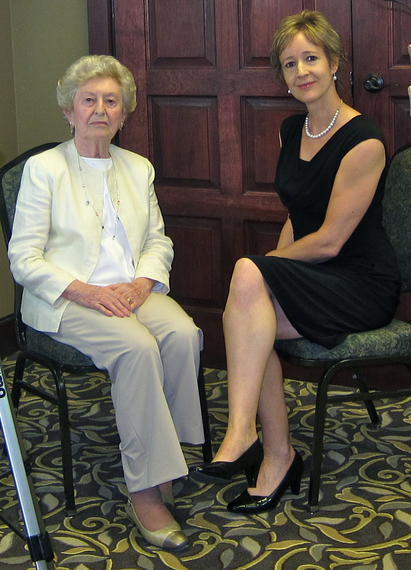 Seventy years ago today, the prisoners of Auschwitz were liberated. Irene Weiss is one of those survivors. She was 13 years old when she was captured, her long blond braids shaved off and her family killed in the gas chambers. Weiss sat down with me to share her inspirational story. Remarkably, it was her vivid daydreams that helped her stay alive.

"'There will never be any hate or discrimination after this, because we will tell the world what happened': This is what a 13-year-old was daydreaming about," she told me.

Irene shared some powerful descriptions of her time at Auschwitz. Here are some excerpts of our conversation.

On the sights and sounds:

At night we could hear the steam engine, which makes a lot of hissing noise. We'd hear the whistle of the train arriving. Then we could hear the hum of human beings, a huge hum of sounds. And then I'd look up the road and see them coming: a huge column of women and children and elderly moving toward the gate of the gas chamber.... You could see flames, like the whole forest was burning.... The screams were blood curdling. I would stuff my fingers in my ears. I couldn't stand it.

On how she dealt with the pain:

I cannot say to you that all I wanted to do is die. No! I pushed that out of my immediate grief. It was like a stone -- you know, without feeling. It's the way we deal with death.... We grieve and find a way to distance ourselves from the real, painful part of grief. You have to do that; otherwise you have to stop living, or you cry all the time ... or commit suicide. Some did.... It was quite easy, by just touching the electrified fence.

On never crying about it:

Weiss has never let herself cry about her experiences, even to this day, despite having her beautiful braids of long, blond hair shaved off; being told by her fellow prisoners that the rest of her family had been killed (they just pointed to the chimneys); and finding a shawl belonging to her late aunt as she sorted through the mountains of prisoners' belongings.

I asked her if she ever cries for joy, for example when she saw her children getting married.

"Well I do experience great joy from my children, endless joy," she said. "Like all parents, it's mixed with a little bit of fear that it should last and nothing should spoil it."

One day soon there will be no more survivors who can tell us their story, which is all the more reason to listen closely and learn from brave women like Irene Weiss. What would it take to make her daydream a reality?

To find out more about Irene Weiss' remarkable story, go to the Holocaust Museum site.

And to listen to the full interview, go to Fresh Dialogues.

Alison van Diggelen is the host of Fresh Dialogues.