"The new rules we passed restore what should be any financial system's core purpose: getting funding to entrepreneurs with the best ideas. ... After all, innovation is what America has always been about."

Just before President Obama spoke to Congress and the nation in his State of the Union address, I sat down with Daymond John, founder of FUBU and one of the stars of the ABC reality show, "Shark Tank," to talk about entrepreneurship, angel investing, job growth, education and... transforming Silicon Valley.

Q: Do you consider yourself an angel?

A: Yes, I do. I'm not friends and family and I'm not part of a venture fund.

Q: Steve Blank, professor of entrepreneurship at Stanford University, says without a culture of risk capital in Silicon Valley, the global innovation hub it has become would instead be little more than a place with a bunch of smart engineers working out of their garages. That speaks volumes about the value of risk capital investment in developing an innovation ecosystem. You are part of that ecosystem. How important do you think it is for job growth and wealth creation?

A: I think it is by far the most important aspect of our ecosystem to have risk-taking investors and (access to) capital. The reason people come to us is because guys like us do not have the restrictions and the same amount of requests that the banks and the financial institutions have.

We do risk investments and 10 percent of our capital ends up creating a return, and the return is greater than all the risks taken. But there's a lot of capital put into the system that traditionally would never be deployed to these startup companies and we never get a return on it.

These companies and individuals often don't have to risk a lot of their personal finances. And once we deploy the capital and things do not go well, they are still in a position to move forward and create different and new entities after learning what has happened in the past. So, for various reasons, I think it's extremely valuable.

Q: Michael Arrington's now infamous remark to CNN's Soledad O'Brien, that he didn't know a single black CEO or entrepreneur in Silicon Valley, has raised the question of the underrepresentation of black founders leading tech startups. But it also raises the question regarding the lack of black angel investors in the space. What can be done to attract the participation of high net worth African Americans to get involved in angel investing and immediately develop minority angel groups as a method of spurring job growth and wealth creation? 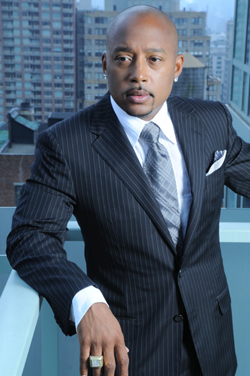 But I do agree there's a lack of CEOs and people of color in Silicon Valley.

I'm the kind of person that when I saw a lack of African Americans in the apparel business, that was something I set out to do and I lead by example.

My No. 1 agenda over the next five years is to change Silicon Valley -- the face of it -- by bringing the same mentality I had with FUBU, which is bringing popular culture -- all my artists, myself, my capital and my friends -- to Silicon Valley.

If you look at the last show (ABC's "Shark Tank" episode aired Jan. 20, 2012), Mark Cuban and I back a CEO of a tech company, "EZ VIP" (Alashe Nelson); that's my first foray into that territory. I don't necessarily know from any other standpoint how to make things happen besides attacking it myself.

Q: How can a culture of high-growth entrepreneurship and an urban innovation ecosystem be cultivated in Urban America?

A: I think it's an education process. I think African Americans are resilient and hustlers by nature. I think they need to understand that you can take that hustle to the boardroom, but it has to be an education process. Right now they don't understand how, but the (access to) the money is out there. Opportunities are there. I'm working with Startup America, and I work with the NFTE program as well as Babson University. So I work with a lot of programs that are trying to give African Americans information these opportunities exist.

Q: What do you think about Rick Santorum's assessment that bringing back the waning manufacturing industry is the best option for black Americans to earn income?

A: I can't say it's the best option. I think it's a needed option; and I don't think it's solely for African Americans. I think that is what we need as a country. I think the reason he's saying that is African Americans know how to be blue collar workers. Because the hurdles... and access to education may not be readily available, or they may not feel that is the way they want to go. Blue collar manufacturing can be something that can be easy to get into as you have seen historically in Detroit.

But, do I think manufacturing should be brought back to America as a whole? I think we should not only rely on the tech-based and new startups. Prices overseas on goods and labor has risen. I think as Americans, especially African Americans, we make the best products... and with the highest standard of quality. And I think we need to bring manufacturing here in general.

Q: As an investor in startups and early stage companies, what do you look for in the founders, the team and the presentation?

A: In the founders I look for a person I feel is trustworthy, driven and smart. I invest in the person first, because in the event the business fails the person and I can move forward and create another business.

In the business itself and/or the product, I love to look at things that have some kind of patent or proprietary aspect to it. I like to look at things that have been developed and re-developed over the course of time so I know the bugs are worked out of it. And in the business itself, I like to look at sales, by far. I want to see that there is a vetted track record of sales to show the price point has worked. And from a delivery and distribution standpoint, that it has worked and they have targeted a certain demographic and/or customer. I like to look at the scalability, that there is scale and upswing, and a place to make a profit, and great margins that will support the business.

An average (American) kid who knows simple programming, science and math can get a job as a programmer easily. Those are the jobs that are available. I think whatever industry you're in, you're going to have to deal with that aspect of the business... whether you're making clothes or a new technology. So, I think by far it's one of the most important things we can do.

Q: What is the most important lesson you've learned as a star on ABC's "Shark Tank?"

A: I learned that, by far, it's the person pitching and the person behind the company. The person as a personal brand is more important than anything else. I've seen great products, and the person's sales were not reliable or believable or trustworthy or driven enoug ... and it died. And I've seen products that were things I would look over; and the person, no matter whether I invested in them or not, was resilient enough to get the job done and grow the product and/or the business.

Q: Tell me about an investment that didn't work out the way you thought it would, but the person in whom you invested made it worthwhile.

A: Companies sometimes take three to five years to show any kind of profit. But TC Pets, led by a young lady named Lisa Lloyd that I invested in, is very similar to the newer version of pillow pets. And it came out at a time that I think was a key time. She's been working and trying to get the product to flourish and to grow. And no matter what, over the last three years -- she has tried different routes, whether it be direct television or international distribution in kids stores, in plush toys, in furniture stores... I think that TC Pets still has viability. I think that it's something that will grow.

But by far Lisa is... I think she's a genius. I think she's a very driven woman, a woman with three kids who is an inventor. She knows how to license products, and Lisa and I have done other businesses. I value her now more than just a partner. I value her as a friend. That becomes way more valuable than the company.

Q: What one question would you ask of America or any of its leaders?

A: Where are the tax incentives for manufacturers and producers to develop factories and jobs here instead of having to go overseas?

If a garment costs me $50 to make here why would I be able to get it overseas for $40? I'd rather make it here, develop factories and jobs and deal with insurance and medical and everything else I have to do, employment and everything else. I'd rather do that here if there's a tax incentive for me to do it. If not, I can just send my money overseas and get a product cheaper without any of the hassle.

But, if you give incentives to manufacturers and people who create jobs, they will work with regards to building our communities and jobs and keep the money within our country. So, where are the incentives? I don't want to give my money overseas.

"Most new jobs are created in startups and small businesses. So let's pass an agenda that helps them succeed. Expand tax relief to small businesses that are raising wages and creating good jobs. Both parties agree on these ideas. So put them in a bill, and get it on my desk this year."