Nakba day is a significant day for the Palestinian people. Almost every family has a story to tell about that day in 1948 when many Palestinians were forced to leave their homes to seek refuge in less troubled lands. For the Sabella family, Nakba day is a day of reflection. Today, I visited my aunt Hilda and uncle Maurice in the Old City of Jerusalem along with a friend and asked them to share more about their memories of Nakba day.

My aunt takes a sip of her sweetened Arabic coffee and looks at me with somber eyes: "I still have the paper and the key, you know," she says. Aunt Hilda was talking about the piece of paper that proved my grandfather's ownership of his home in Katamon in West Jerusalem in the year 1936. I ask her to tell me more about that house. "Your grandfather purchased the estate from the Latin Patriarchate in 1936 and our family lived in it until 1948 when the war broke out," she says. "It was a beautiful home with many empty fields around it," my aunt recalls. "I still remember the view from our front door." 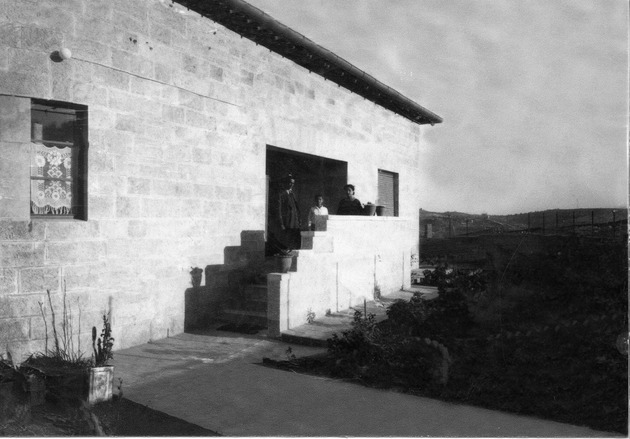 I asked her about what happened in 1948. She shakes her head, takes a puff from her cigarette and takes me back. "Your grandfather used to love this home, but when the Hagana bombed Katamon's Semiramis Hotel killing 26 people in the process, he decided it was time to leave." The Hagana was the Jewish underground militia which was active at the time and later formed the core of the Israeli military. My grandfather was worried that the neighborhood, which was the only Arab neighborhood between two Jewish ones, would continue to be targeted by the notorious Jewish militia. He chose safety first, as did many others who were forced to flee in search of safer grounds.

My grandfather Zacharia, my grandmother Margaret, my father Bernard, my uncles Abdallah and Maurice, and my aunts Hilda and Bernadette packed their bags and made their way towards Lebanon where they sought refuge in the small town of Ghazir. They stayed there for nine months until they decided to return to Jerusalem and settle in the Old City, which was under Jordanian rule at that time. This is the very home where we were sitting drinking our Arabic coffee and talking today. It is the very home where my family meets for holidays like Easter and Christmas and where we honor and keep alive the many traditions that were celebrated by my grandparents. Back in 1948, this house in the heart of the Old City of Jerusalem was a one room flat. There was no kitchen, no toilet, and no running water. The seven members of the Sabella family lived there in these dire conditions for seventeen years. "But we managed," says my aunt Hilda.

In 1965, the house was renovated and for the first time, the Sabella family, which by then consisted of ten members with the addition of my uncle Tony, my aunt Therese and my uncle David, was able to enjoy a home with running water and an en-suite toilet. In 1972, my family went back to the place where their Katamon home once stood. "We went back there to visit our home but found that it had been destroyed and in its place was a sixteen-apartment building complex," my aunt Hilda recalls. My aunt tells me that my family stood there in silence for a while reminiscing about their childhoods and the surrounding empty fields where they used to play and wander.

We, the Palestinians, commemorate Nakba day not because we hate our neighbors, but because while our neighbors celebrated, we suffered. Each Palestinian family has a story to tell which it holds dear to its heart about that day. How can anyone ask my father, my aunts or my uncles to forget the memory of Katamon, to bury their childhood memories of that place, or the empty fields that surrounded their home? We commemorate Nakba day because in a way our Nakba is still ongoing to this very day. Whether it's a family eviction in Silwan, or the seizing of land in Beit Jala, or a destruction of a Bedouin village in the Jordan Valley, or the stripping of residency rights for Palestinians in Jerusalem, the suffering of our people continues and all we have is our memories to hang on to. We will never forget our past, but perhaps when our people are free, independent, and lead a dignified life, we can start looking for the future rather than mourn our past. But until that day happens, our people will continue to go back in time to commemorate our Nakba.