The urgent imperative for the Fed to revert to canons of sound money can be illustrated by its opposite: the utterly shameful and gratuitous bailout of Morgan Stanley two weeks after the Lehman Brothers bankruptcy. On September 29, 2008, Morgan Stanley was insolvent and belonged in the financial morgue on a slab alongside Lehman.

Yet that very day it reported to the public that it had "strong capital and liquidity positions." That statement was utterly misleading, but it never gave rise to an SEC investigation because it could be defended by means of a hair-splitting technicality. A later investigation by the Federal Crisis Inquiry Commission, in fact, showed that Morgan Stanley had $99 billion of liquidity on the date in question. What the investigation also showed, however, was that very same day it had been the recipient of $107 billion in liquidity injections from the Fed's alphabet soup of bailout programs. It was liquid only because it had become a branch office of the New York Fed!

Absent the cash being injected by the Fed's multiple and massive fire hoses, Morgan Stanley would have been deeply illiquid. Its hot-money lenders would have seized tens of billions in collateral, which they would have sold at any loss necessary to retrieve their cash. Lehman's reputed $40 billion loss at the time of its filing would have paled compared to the losses which would have been ripped from Morgan Stanley's tottering $1 trillion balance sheet.

Yet the survival of Morgan Stanley was of no moment to the American economy. It was a giant leveraged hedge fund being subjected to the mother of all margin calls; that is, its reckless reliance on overnight wholesale money to fund massive amounts of impaired, illiquid, and highly volatile assets was undergoing a flaming crash landing.

The claim that its vestigial capabilities in the mergers and acquisitions arena and in underwriting stocks and bonds needed to be preserved was ludicrous. Neither of these businesses required meaningful amounts of capital, and there were always dozens of pedigreed Wall Street veterans waiting to hang out a boutique investment banking shingle to pick up the slack.

Even though no public purpose was served, the details of the Fed's $107 billion bailout of Morgan Stanley underscore the abject manner in which it had capitulated to the imperatives of crony capitalism.

In this episode lies proof of the lasting damage wrought by the bailouts of Wall Street. Morgan Stanley's CEO and chairman, John Mack, was a ruthless gambler and bully who had never hesitated to exploit any available avenue to make a buck, to say nothing of a billion bucks. In the run-up to the crisis, Morgan Stanley had embraced any and all short sale trades that could potentially yield a profit, including a giant short of the housing market which blew up and ended up costing Morgan Stanley a $9 billion write-off.

But after Mr. Market dispatched Lehman Brothers and then Merrill Lynch, the short sellers had turned their sights on Morgan Stanley. It was by then apparent that its wholesale funding was rapidly vanishing, and it would be forced to take massive losses on the junk assets which had accumulated on its balance sheet over years and years of bubble prosperity on Wall Street.

Yet in less than a New York minute, Mack had reversed course and stormed the barricades on Capitol Hill and the White House, demanding an SEC ban on short selling of his stock and that of the other banks and financial institutions. On Tuesday afternoon, September 16, for example, the treasury secretary, Hank Paulson, according to his memoirs, "got an earful from John Mack . . . the short sellers were after his bank. His cash reserves were evaporating."

Crony capitalism had now reached its apotheosis: one insuperably arrogant prince of Wall Street was commanding his former chief rival, and now occupant of the highest financial policy job of the land, to pull any and all stops to save his firm. From what? The answer was, to save it from its own clients. In fact, prime brokerage customers and trading counterparties were withdrawing their deposits and margin accounts at a furious pace because they knew full well that, like Lehman and Bear Stearns, Morgan Stanley was a house of cards.

The idea that the short sellers were draining Morgan Stanley's cash was a complete canard. Creditors and lenders to Morgan Stanley were fleeing, which would force a fire sale liquidation of impaired assets and thereby render the firm insolvent. Short sellers were furiously attacking the carcass because they knew the firm was finished, brought down by the foolish leverage and hot-money wholesale funding from which it had harvested so much ill-gotten profit in the past.

What the short sellers hadn't reckoned with, however, was the final triumph of crony capitalism. Morgan Stanley was spared because Goldman wanted it rescued. In a phone call to Paulson during the heat of the crisis that day, Goldman's current CEO, Lloyd Blankfein, had left no doubt about the stakes. As the tone-deaf Paulson actually confessed in his own memoirs, he had used the great powers of his office to save Goldman Sachs: "Lloyd was afraid that if something wasn't done, Morgan Stanley would fail . . . And even though Goldman had plenty of liquidity and cash, it could be next."

So within hours of Mack's presumptuous tantrum and with virtually no analysis or due process, the US government met his demands. Chris Cox, the former congressman and purported free market true believer who George W. Bush had chosen to head the SEC, issued a truly pitiful announcement. In it he explained to American citizens that for the next fifteen days they would be free to buy financial company stocks, but not to sell them.

The short-selling ban was the product of naked Wall Street aggression, and in the case of Morgan Stanley there could be no doubt as to the true purpose. The Morgan Stanley stock had dropped from $80 per share to $40 on the eve of the crisis, had fallen to $20 upon the Lehman filing, and by the end of September was at $7 and sinking fast.

Thus, in the final weeks of September leading to the fateful October 3 approval of TARP, Washington's action was being driven by an overriding Wall Street imperative; namely, saving the stock price of Morgan Stanley-- and those of Goldman, JPMorgan, Bank of America, and Citigroup, too-- from the fate of Lehman Brothers, and assuring that the personal wealth of John Mack and the remaining Wall Street titans would remain intact.

Within a fortnight, of course, the danger had already passed. Armed with gifts that only the sovereign state can bestow--a ban on short selling of its stock and $100 billion of cash based on junk collateral--Morgan Stanley evaded Mr. Market's wrathful attack and not only remained open for business, but saw its stock price recover smartly. By the end of the year it had tripled, and within twelve months had risen fivefold from the time of its bailouts.

Nor was Morgan Stanley given special rank in the hierarchy of Washington's bailout dispensations. From the same liquidity fire hoses which powered cash into Morgan Stanley, nearly the identical amount went to Citigroup at $100 billion, Bank of America at $91 billion, Goldman Sachs at $80 billion, and nearly equal amounts to the leading banks of Europe. All told, the Fed dispensed nearly $700 billion in emergency loans during the last months of 2008, doubling down on the appropriated money provided by TARP.

At the end of the day, this trillion-dollar infusion of capital and liquidity from the public till had a single overarching effect: it nullified in its entirety the impact of Mr. Market's withdrawal of a similar magnitude of funding from the wholesale money market. So the very monetary distortion--the availability of cheap overnight funding in massive quantities--upon which the Wall Street financial bubble had been built had now been recreated at the lending windows of the Fed, FDIC, and the US Treasury.

The opposite path of liquidating the Wall Street bubble was eschewed, of course, not only because it would have meant massive losses to speculators in the stock and bonds of Goldman Sachs, Morgan Stanley, JPMorgan, and the remaining phalanx of the walking wounded. Crony capitalism also triumphed because in muscling the system during the white heat of crisis, Wall Street had plenty of intellectual cover. The fact is, mainstream economists of both parties were trapped in a Keynesian dead end, proclaiming that the solution to the crushing national debt load which had actually triggered the financial crisis was to pile on more of the same.

Accordingly, banks which were "too big to fail" couldn't be busted up, since they were allegedly needed to shovel more credit onto already debt-saturated household and business balance sheets. Likewise, speculators who should have suffered epochal losses during the meltdown were resuscitated by Fed-engineered zero interest rates in the money market, thereby quickly reviving the same massively leveraged "carry trades" in commodities, currencies, equities, derivatives, and other risk assets which had brought on the crisis in the first place.

This an excerpt from David Stockman's new book, THE GREAT DEFORMATION: The Corruption of Capitalism in America, published today by PublicAffairs. 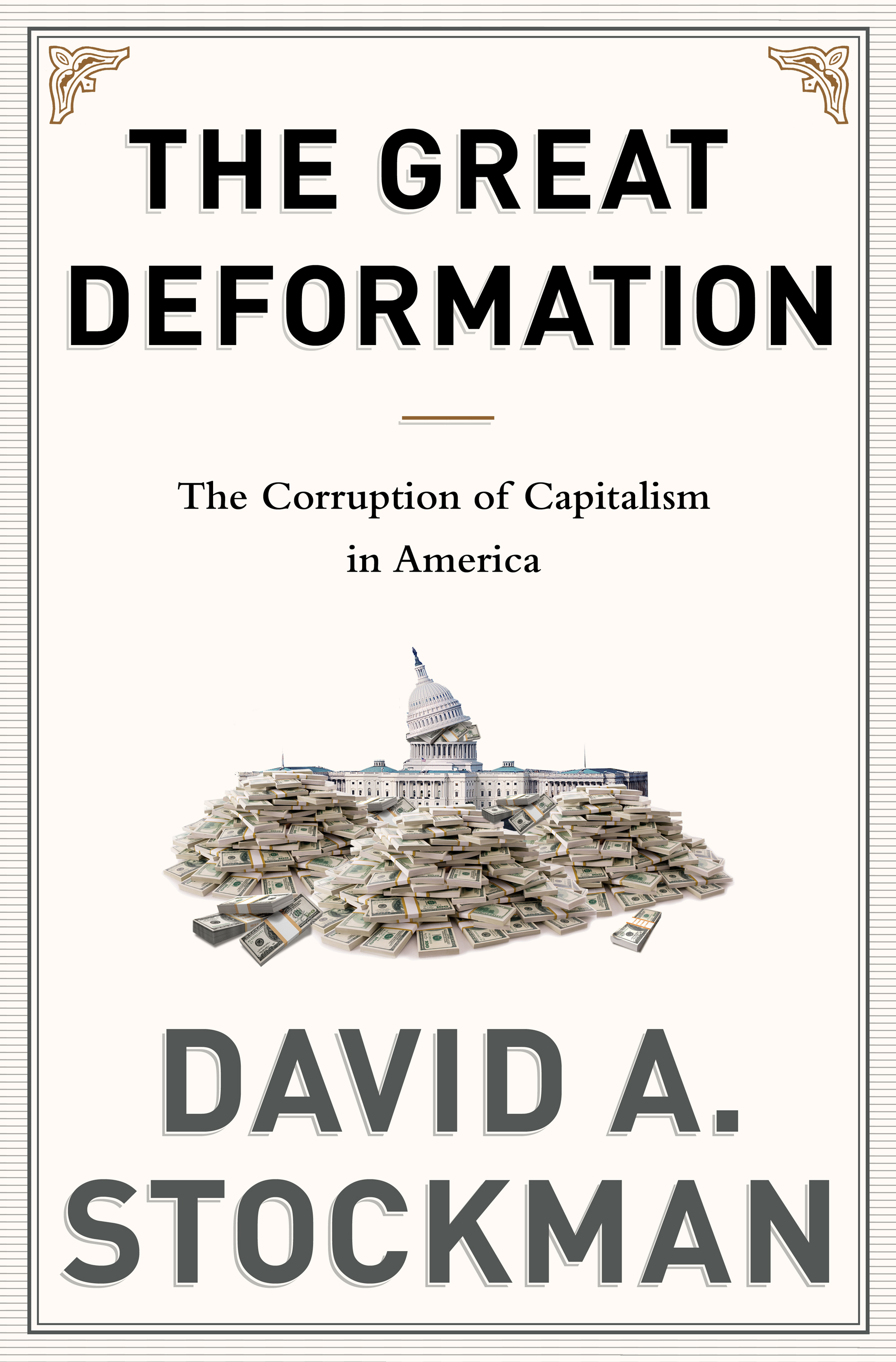