Two decades after the Dayton Accords, the question is not about what happened during the three weeks of negotiations, but why is Bosnia & Herzegovina ("BiH") still defined by and stuck in that period and the conflict that it ended. The Dayton Accords were envisioned as transitional not only in ending the war and its suffering, a most urgent and worthy goal, but also in opening the road for BiH to join its European neighbors in Euro-Atlantic institutions and thus advance economically and politically.

Unfortunately, that road forward not only has not been advanced, but there are now some who employ the Dayton Accords as authority to retard the progress of BiH forward. Such backward-looking political leaders cling to nationalism, chauvinism and fear as a means to undermine the very objectives of the initial peace agreement achieved in Dayton now 20 years earlier. If not constructively utilized to move BiH forward, then the Dayton Accords cannot be a refuge for those living in the past. (Initially it was labelled as the "Dayton/Paris Accords" or even "Paris/Dayton Accords" as the French insisted to assume some credit for the presumed achievement, but as the years have passed, progress proven illusory and the EU lacking the will to move BiH integration forward, "Paris" has been conspicuously dropped in official communiques). 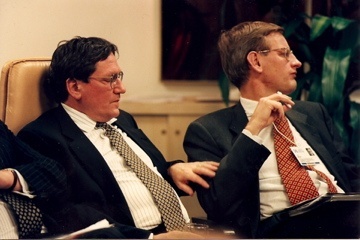 The Dayton Accords did reflect a variety of interests but perhaps even more reflected the role of the negotiators. Along with the US as host, representatives of the European Union, UK, France, Germany, OIC and Russia were part of the process. Each of these sought some input in defining the result, but perhaps least discussed is the personal ambitions that some of these presumed "mediators" sought to define by being credited with bringing an end to conflict in BiH.

The more that the conflict was described as ethnic or religious, the greater accolades presumably would be bestowed upon such self-proclaimed peacemakers. Of course, this narrative also besmirched the reputation of the peoples and citizens of BiH and ignored a history of rich diversity and its cultural, artistic and economic achievements. Rather "age-old hatreds" became the rationalization not only for the war but also the foundation for the Dayton Accords. The narrative of an ethnic/religious war may have been consistent with that of some of the participants in BiH. However, it is notable that President Slobodan Milosevic (of neighboring Serbia & Montenegro) was designated as representative of all the "Serbs" of BiH. President Franjo Tudjman (of Croatia) was presumed to speak on behalf of all "Croats" in BiH. There was an effort thus to project the BiH government in Sarajevo as representing only the interests of Bosniaks, (Bosnian Muslims.) It was easy to fall into this both diplomatic and ethical trap.

As an American, I was brought up in an environment where it was not inconsistent to be a "Muslim," "Yugoslav," "Bosnian" with an American identity that encompassed all. That is the perspective from which as BiH representative I also saw it as my responsibility to further the interests of all BiH citizens whether Serb, Croat, "Other" or Bosniak. There were many areas of common interests, and even more could be built upon, from European integration to BiH becoming a source of hope rather than conflict on a global scene that two decades earlier faced new challenges even as the divides of the cold war were being torn down. Perhaps one of the best examples of the opportunity for BiH to be a contributor and source of stability rather than trapped in conflict is the institution of the military forces of BiH. This is one area where former adversaries were provided the opportunity and resources to work together -- (you can read my article in The Huffington Post: "Can Bosnia's Army Save the World?" While this institution is a source of progress and pride built upon the contributions of soldiers who may have fought against each other two decades earlier, why is it that political institutions now presumably shepherding BiH carry on a war that should have been overcome long time ago?

Toward the end of the Dayton talks I resigned my position as BiH Foreign Minister. Bringing the war to an end was the most worthy goal; but so much of the future did not have to be sold out to rationalize the killing of the past, for the benefit of the ultra-nationalists and those presumed mediators who sought excuses for inaction in the narrative of age-old hatreds. I felt betrayed as much as an American as a Bosnian/Herzegovinian - if you surrender to the rationalization of age-old hatreds, all you have to imagine is how some US cities from New Orleans to Charleston might look after the reality of slavery, civil war, lynchings and segregated schools - America has or at least is well on the way to overcoming these "age-old hatreds." In Dayton, my American values were betrayed even as BiH citizens still pay the price. (See: "Seduction Diplomacy") 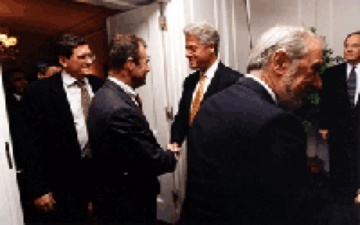 Even after I resigned, I stayed on to try to accomplish the best result for BiH, particularly as I then and now see the US model as a worthy perspective regardless of whether adopted in part or just in principle. The "District of Brcko" is something that I take particular pride in, and at least it showed what was possible in BiH as a whole - Brcko was no different in the war, perhaps worse conflict and violence than many, but was given some might say a special status in peace - I would simply call it a return to normalcy. On the other end of Brcko, I was given another assignment after the Dayton talks concluded. Perhaps more than 3 weeks at the US Wright Air Force base in Dayton had mentally and physically worn down most everyone. So, I was left to draw the actual lines around the delineations of the RS and Federation along with General Wes Clark.It seems that the only thing that mattered to most participants was the mathematics of 51% to 49%, (long demanded by Milosevic as well as Radovan Karadzic and General Ratko Mladic for coming to the negotiating table -- all have been indicted by the International Criminal Tribunal for seeking to effect such via ethnic cleansing throughout BiH.) No one seemed particularly focused, perhaps concerned, regarding whose town, village and farm was cut into two pieces or perhaps located on the "wrong side" of the divide. It was not only an arbitrary exercise but one that I found demeaning to me and particularly to those directly affected on the ground.

All BiH citizens were dehumanized when General Clark and I sat in a flight simulator in Dayton deciding as best as we could from several hundred meters above where the lives and homes of people below belonged. It was the lowest part of Dayton, and this still haunts lives of many when effectively two Americans, (my knowledge of BiH was limited to my travels as a very small child and subsequently during the war as Ambassador and Foreign Minister crossing battle lines in the darkness of the darkest night), drew the lines of a BiH never before delineated in this manner.Less than a year later, I would engage in one final effort to promote the reconciliation and reintegration of BiH. In the summer of 1996, I traveled to Banja Luka, (now the capital of the newly designated "Republika Srpska") with a group of EU parliamentarians who were there to meet with civil society, from media to religious leaders. The war was still fresh, but it was already in my and their view an opportunity to have BiH move forward in being welcomed, integrated into European institutions.

Some in Banja Luka were surprised to see me, as I was unannounced. Some among the "security services" sought to incite an incident as I departed. However, overwhelmingly the welcome from civil society was not only courteous but think most also saw it, were eager, as a further opening of the door and opportunity toward normalization. In the immediate years after the Dayton Accords, optimism and a sense of the state coming together for benefit of all citizens was higher than it is today. The Dayton Accords bear some of the blame for looking backwards but others build upon the illusion of division as progress. As history has evidenced,  the erecting of walls is more akin to building a prison. BiH needs a fresh look beyond to fully see and realize its future as full member of the Euro-Atlantic family and globally sought after partner.