BY MARK LONG, THE ASSOCIATED PRESS

DAYTONA BEACH, Fla. -- The Daytona 500 has been halted by a fiery explosion caused when Juan Pablo Montoya slammed into a jet dryer under caution.

It's the latest mess to hamper NASCAR's season-opening race.

Montoya was driving well behind the rest of the field when something on his car broke, and he started sliding out of control toward the truck, which holds 200 gallons of jet kerosene.

Montoya's No. 42 Chevrolet hammered the truck, setting off an explosion and sending fuel pouring onto the famed track.

Montoya got out unharmed, although he seemed to stagger around the infield grass. The driver of the truck had to be helped from the vehicle.

Dave Blaney was leading at the time of the wreck, followed by Landon Cassill, Tony Raines and David Gilliland. All of them are relative unknowns in the Sprint Cup Series.

The Daytona 500 was postponed more than 30 hours because of rain, rescheduled as a primetime event under the lights.

The delay came two years after the 500 was halted for hours because of a pesky pothole in turn two. That one damaged the track so much that officials moved up a scheduled repaving to the track.

The explosion and the eventual removal of the truck seemed to damage the track, gouging lines into the pavement. 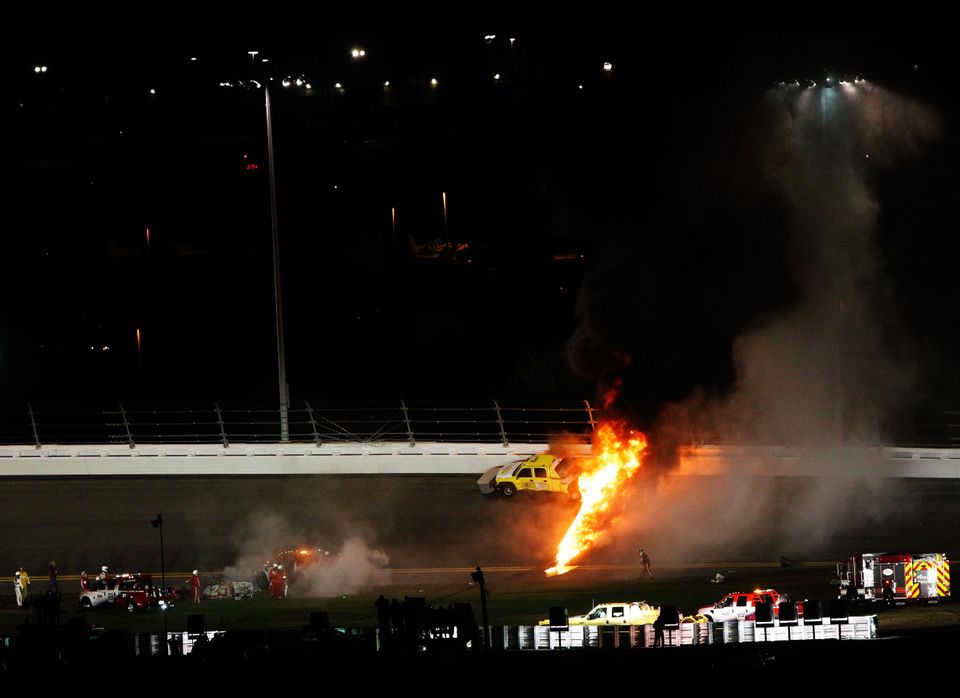 1 / 64
54th Annual Daytona 500
A jet dryer bursts into flames after being hit by Juan Pablo Montoya, driver of the #42 Target Chevrolet, under caution during the NASCAR Sprint Cup Series Daytona 500 at Daytona International Speedway on February 27, 2012 in Daytona Beach, Florida.
Getty